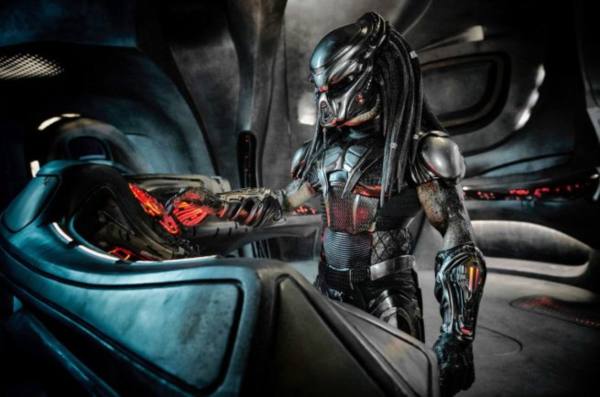 Sitting down in the cinema to watch Shane Black’s The Predator is like being taught to swim by an irresponsible parent. Before you have had the time to swallow your first mouthful of popcorn, you have been thrown into the deep end of the pool, with no arm bands to protect you from the terrifying depths. This is a film that understands the legacy it is shamelessly trying to cash-in on, as there is no pretence over the audience members not knowing what is in store for them. And the film does deliver on all the typical Predator staples, from the thermal vision to the camouflage, the film understands the kind of people it is trying to appeal to. However, the film does not understand how to execute its narrative in both a concise and engaging way. I find it particularly ironic that the main character of this film is a sniper, seeing as this movie’s story runs at the pace of a speeding bullet.

In the first five minutes of the film alone, we have seen a spaceship crash to earth, been introduced to a cast of thousands and have watched several unnamed extras being gutted in gruesome and gory detail. And from then on, the film continues to unravel itself as a dizzying whirlwind of blood and fire, allowing very little rest bite for the watching audience. Following the crash, the film hones its focus to the character of Quinn McKenna (played by Boyd Holbrook) who is able to salvage some alien technology from the wreckage of the spaceship. Being a quick-witted and intelligent individual (ha ha ha), McKenna does not try to keep the stolen weaponry, but instead sends it back home to his wife and son, who is autistic and therefore able to work the alien armour.

One of the more frustrating elements of this film is that you can see the beginnings of a coherent narrative from what I have described alone, as Shane Black does lay the foundations for a simple and yet effective storyline. However all this is marred by the addition of other elements that only help to push the film further into the realm of the ridiculous: such as the presence of an ‘upgraded predator’ and his pack of alien blood hounds. There is also the inclusion of ‘The Loonies’, a group of mentally unstable war veterans, who McKenna befriends during the turbulent opening of the film. As a collective the Loonies practically scream Shane Black, as they are characters completely born from dark and vicious comedy, a common staple of Black’s filmography. And yet in this case any humour delivered by the characters’ falls flat, with most of the jokes relying solely on profanity or shock value to obtain a laugh. This is particularly unfortunate when considering the range of talent that makes up the Loonie collective, from Game of Thrones Alfie Allen to Mad TV’s Keegan-Michael Key.

This leads me to another issue that I had with the film, this being the complete unoriginality of the story and premise. In fact, I would argue that Black’s movie borrows elements from all of the previous Predator movies, not allowing it to present itself as its own unique entity. The rag-tag cast of characters recalls the criminal cast of Robert Rodriguez’s Predators (2010), the suburban-forest setting is reminiscent of some of the darker scenes in Alien vs Predator: Requiem (Strause Brothers, 2007) and the military backgrounds of the core cast returns the film to its original Schwarzenegger roots. Nothing in the film feels like its own creation, which is surprising when considering the lack of limitation you have when writing a movie belonging to the science-fiction genre. And yet Shane Black delivers us a messy and shallow film that conveys very little emotion or excitement to the already confused and queasy audience.

I wish I could say that the action and gore make up for the story’s misgivings and yet they don’t. The film is so quickly edited and so poorly filmed that you hardly see the violence meant to be taking place. Sometimes blood and entrails simply fly across the screen in vivid colour, with little to no explanation of why this is happening. This reaches laughable heights in the third act, in which a majority of the core cast are slaughtered by the new and improved predator, and yet you have no idea who has been killed until the surviving characters are reunited on the screen. I mean the primary antagonistic human character is killed in a sequence that lasts two seconds, giving you no time to absorb the death of what should have been an arguably significant figure.

And the film continue to fly over the audiences’ head until it reaches the movie’s rushed ending, which seems to be the only reason this train wreck was created. The ending hints at the possibility of a sequel that I pray will never come, for what we have already seen does not promise anything better for the following films. I am not one to wish ill will upon a film but I sincerely hope that this film fails and is brushed under the rug along with every other unnecessary horror sequel, where it can fester and stew until a future instalment warily reminds us of its existence.