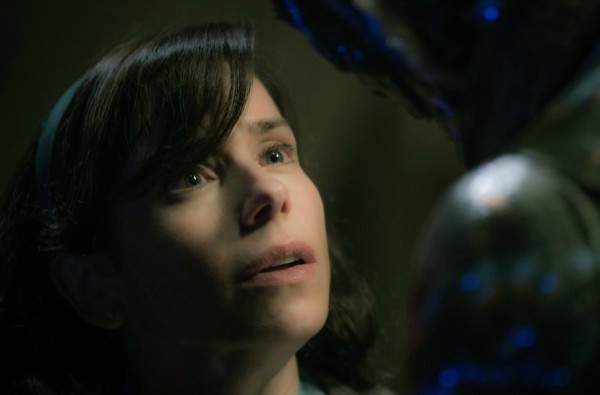 Despite trailers which made it look like the latest entry in the growingly forgettable oeuvre of director Tim Burton, the resultant film, The Shape of Water, from highly acclaimed film-maker Guillermo del Toro (Pan’s Labyrinth, The Devil’s Backbone, Cronos), is a wondrous, wholly satisfying addition to an already impressive body of work.

Set in 1962, during the development of what would be a long-running cold war between the U.S. and Russia, we are introduced to Baltimore resident Eliza (Sally Hawkins), a mute woman who lives an ordered, if reclusive, existence. She is friends with her equally socially awkward neighbour Giles (Richard Jenkins), who paints promotional posters for advertising companies, but otherwise doesn’t feel comfortable mingling with members of the general public.

Eliza works as a cleaner at an expansive government building, which houses a number of secret projects, and partners each night with the relentlessly talkative Zelda (Octavia Spencer), who is forever complaining about her useless husband. During one graveyard shift, the two witness the arrival of a strange container filled with murky green water, and soon discover that it holds a fantastical amphibian man (Doug Jones), captured in the Amazon and brought to this facility for further study.

Intrigued by what she has seen, Eliza starts taking her breaks in the chamber where the creature is chained, openly wanting to form a friendship with the brutally mistreated subject. This behaviour doesn’t go down well with the amphibian man’s captor, government agent Richard Strickland (Michael Shannon), who sees this project as a way to impress his superiors, who want to access any abilities the creature may have that would put them ahead of the Russians in the Space Race. Also keeping a close eye on the pair’s growing relationship is Doctor Robert Hoffstetler, who doesn’t approve of Strickland’s violent methods or what the military have in store for their unique guinea pig.

When it becomes clear that the scientific research will soon become fatal, Eliza realises she must try and rescue her soul mate before it is too late.

The Shape of Water is a beautifully designed, emotionally resonate experience from a film-maker who so obviously loves his craft. With so many films coming out of Hollywood that feel like generic product coming off a never-ending assembly line, del Toro invests so much of himself into each project, giving them an undeniable, individualistic identity (even the inconsistent Crimson Peak still has so much to enjoy).

Working with co-writer Vanessa Taylor (Divergent, Hope Springs), del Toro creates an intriguing gallery of characters, all of whom deal with their own specific dreams and realities, and cleverly incorporates political and social issues around the edges, clearly presenting various intolerances that the main couple are successfully overcoming. Understandably, del Toro wants to make these points in a impassioned rather than low-key manner.

It must be said that this could easily be seen as a prequel to del Toro’s beloved Hellboy films, with government premises that look familiar, while introducing us to an amphibian man who takes a liking to music and a particular kind of food. The director is smart enough to structure proceedings as a standalone story, but fans will delight in a number of well-placed references.

As with del Toro’s other films, The Shape of Water is a treat for the senses, with gorgeous cinematography by Dan Laustsen (Crimson Peak, John Wick: Chapter 2), imaginative production design by Paul D. Austerberry (30 Days of Night), and a melodic score by the indefatigable Alexandre Desplat (Tree of Life, Godzilla, Based on a True Story). The effects involving the amphibian man are convincing and are never gratuitously overused.

Hawkins, who appeared in the Mike Leigh films All or Nothing (2002) and Vera Drake (2004), before garnering audience attention in the director’s 2008 effort Happy-Go-Lucky, is marvellous as Eliza, bringing a genuinely emotive quality to a character that, in lesser hands, could have been utterly laughable. You truly believe the feelings she is acquiring for her otherworldly companion, no matter how strange the situation may be. Along with the enormously enchanting Paddington 2, this is the perfect time to catch this talented actress in cinemas.

Shannon (Loving, Midnight Special, 99 Homes) brings his typically unsettling intensity to the role of Strickland, Stuhlbarg (Call Me by Your Name, A Serious Man) is excellent as Hoffstetler, while the ever-reliable Jenkins (The Visitor, Burn After Reading, Bone Tomahawk) almost steals the film as the broken-but-hopeful Giles. Only Spencer (The Help, Hidden Figures, Snowpiercer), who is still fine, doesn’t seem to fully involve, mainly because the role appears too similar to those she has played before.

The Shape of Water is pure big screen magic and a glorious love letter to cinema, one that swims in its celluloid history with a rare blend of passion, creativity and purpose which is missing from too many Hollywood films churned out today.