By Abby Stevens (Chambersburg, Pennsylvania, US) 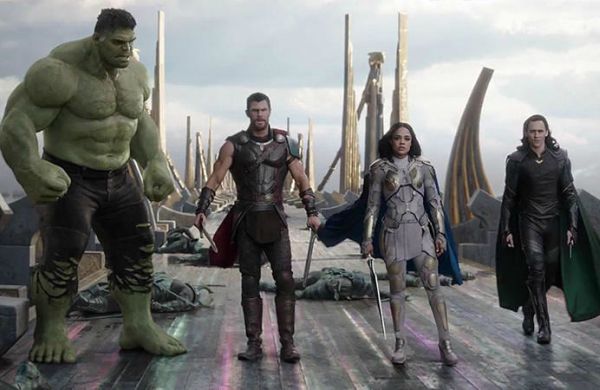 As with most superhero movies, a villain must surface as the antagonist. Or in this case, a villainess. Thor (Chris Hemsworth) finds Loki (Tom Hiddleston) on Asgard disguised as Odin, their father. Thor drags Loki to earth and with the help of Doctor Strange they find the real Odin, who tells them of his firstborn, Hela (Cate Blanchett). As the goddess of death and the rightful heir to the Asgardian throne, Hela becomes a threat that Thor must eliminate. While Cate Blanchett plays Hela remarkably well, her character lacks the necessary luster to become an iconic Marvel villain. She and Thor simply do not spend enough time face to face in battle. Instead, Thor spends more time on the planet Sakaar fighting Hulk (Mark Ruffalo) and then forming a team to fight Hela, than fighting the goddess herself.

While the plot lacks brilliance in some places, the filmography is visually stunning with crisp graphics and clear shots. This movie has many colorful aspects, such as the rainbow road leading to Asgard and the bustling city on the planet Sakaar. The array of color paired with the scenes of spacecraft cause this film to feel different from the previous Thor movies. Instead, Thor: Ragnarok leans more towards the sci-fi vibe of Guardians of the Galaxy.

Along with the different atmosphere, viewers will find that Thor himself is not the same. While in the first half of the movie he still has his long blond hair, Thor’s luscious locks are cut off for the arena scene in which he fights the Incredible Hulk. The man who gives him a haircut is none other than Stan Lee, writer of Marvel comics. Thor’s new look is not drastic or appalling. On the contrary, he looks more like a gladiator than the Norse god of thunder, which gives him a modern appearance and makes him seem a little more relatable as a character.

His whole demeanor changes as well. Instead of his typical serious attitude, Thor becomes a main part of the comic relief. In fact, five minutes wouldn’t go by without some sort of comedic comment from one of the characters. One funny moment happens in the arena on Sakaar. Hulk has just ran onto the arena and Thor screams, “YES! We know each other! He’s a friend from work.” The comedy lightens the mood of the movie, however, it can be overbearing at times when you simply just want the plot to continue instead of pausing for yet another funny scene.

As usual, Chris Hemsworth is brilliant as Thor. His acting is genuine and his humor gives Thor a fresh personality. In addition, viewers get to experience more of Mark Ruffalo as Hulk. He is not just a huge green hothead, he is a human being who struggles with controlling his anger. In this film, Thor and Hulk make a powerful team: two of the most powerful Avengers working together

Overall, Thor: Ragnarok fits well into the Marvel Cinematic Universe and serves as a fun addition to the world of superhero movies.