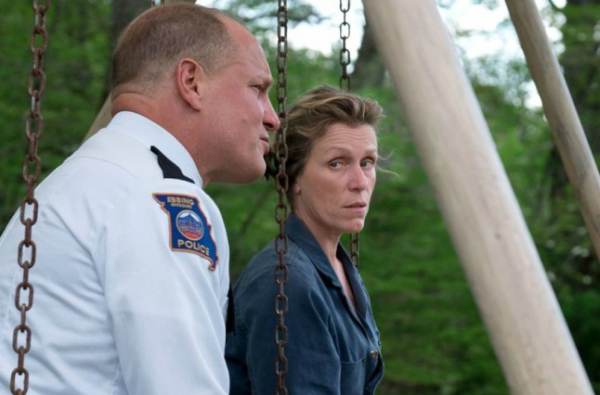 The story follows Mildred Hayes (Frances Mcdormand) a mother who challenges the local authorities to solve her daughter’s murder case, after months have passed with no results.

This is a pretty bleak story thematically. I really didn’t expect to be as emotionally invested in the characters and the story as I was. It’s really a credit to the script and the performances that were given that truly drew me in instantly. Especially the way in which it surprised me with the emotional reactions it left me with throughout the film. The dialogue is great because at points it’s emotionally distressing, but thankfully it never becomes truly depressing due to the brilliant dark humour. You will get the moments that affect you emotionally and you will also get moments that make you smirk or even laugh out loud. It’s a great balance.

The fantastic script is filled with terrific performances all around from Francis Mcdormand, Woody Harrelson and Sam Rockwell. Francis Mcdormand gives an outstanding performance as Mildred. It is pretty clear from the opening scenes she is a mother who is truly beyond the point of being fed up, due to how the local authorities have treated the investigation into her daughter’s rape and murder. This type of role demands a lot from an actor. To remain in such a distressful state throughout the whole shoot is a difficult task, but thankfully she does it so well. This really allowed me to empathise with her character and the horrible situation she is in. So if she had moments of anger I could completely understand what really provoked it.

Woody Harrelson portrays Sheriff Bill Willoughby. Who is a seemingly lazy man who didn’t put any effort in to solving the murder case of Mildred’s daughter. This performance really surprised me. At the beginning of the film I didn’t care much for his character at all, due to the way his character is as an individual. I thought my opinion would remain like this throughout, but then the script adds a surprising element to his character which completely changed my thoughts. This provides him with such an important purpose of the story. I could resonate with his character due to the things he was going through within the story. I didn’t expect this at all and it made me change my opinion of him overall.

Sam Rockwell’s performance as Officer Jason Dixon, is an incredible one. In the beginning he is very despicable, but once again the script develops his character in a way where it grew me to love his character. This really allows you to subvert your expectations of his character throughout the film. Lucas Hedges, John Hawkes and Peter Dinklage were also amazing additions to the cast.

Martin McDonagh’s direction was exciting and superb, it was mostly filled with so much energy. There were often moments of violence, the camera got really up close with the actors and it felt surprising enthralling and visceral. One scene in particular was all done in one take, I was simply captivated by the entire scene it was such a joy to watch. This really added more energy into the film.

There’s nothing I really dislike about this film, I would say I enjoyed the first two acts of the film more but the third act is still wonderful. I would have liked to have seen more of the characters motivations by the films conclusion.

Three Billboards Outside Ebbing, Missouri is an outstanding film. The performances all around were fantastic especially the three main leads. The way in which the script blends the dark humour within the grim subject matter is fantastic. Also the message of the film is very powerful and I was extremely surprised at how emotionally the film affected me personally.