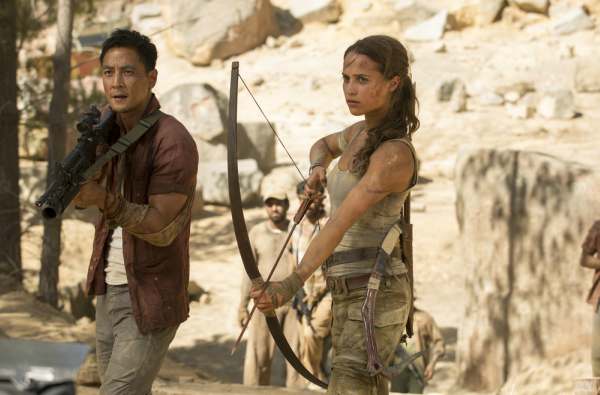 After the first attempt to bring the hugely popular video game Tomb Raider to the big screen fizzled quite spectacularly, with Simon West providing an exceedingly dull entry in 2001, followed by Jan de Bont’s atrocious 2003 follow-up, it looked like the cinematic adventures of Lara Croft were dead and buried. But after a successful reboot of the game itself in 2013, there has been renewed interest in bringing the intrepid adventurer back to theatres, and now that time has arrived, with a large scale reinvention that is thankfully a considerable improvement over the earlier misfires.

On board this time is Oscar winner Alicia Vikander, who is presented as a more realistic, level-headed Lara, instantly eliminating the pouty, tightly-clothed fantasy image created by Angelina Jolie. Lara wants to maintain an independent lifestyle, uninterested in the inheritance left to her by her father, Richard (Dominic West), an explorer who has been missing for seven years. Unwilling to sign the necessary papers which will transfer all properties and wealth over to her, Lara knows that if she does complete the process, it will signify once and for all that Richard is dead.

During one such meeting with long-time guardian Ana Miller (Kristin Scott Thomas) and company associate Mr. Yaffe (Derek Jacobi), Lara discovers a key which leads her to Richard’s secret lair, and finally uncovers what mission he was on when he disappeared. Researching the history of a famed witch named Himiko, who was forcibly buried on a small Japanese island located in the treacherous Devil’s Sea, Richard was obsessed in finding out if the legend, stating that she was able to kill with just the touch of her hand, was true.

Determined to truly find out if her father is still alive, Lara uses the detailed notebook left by Richard to make the perilous journey to the obscure island, and enlists the help of drunken Hong Kong sea captain Lu (Daniel Wu), whose father was the last one to speak with Richard.

This expedition will be fraught with danger, as the powers of Himiko are also sought after by the secretive Trinity Organisation, who have entrusted the assignment to the violently unstable Mathias Vogel (Walton Goggins), who is willing to kill to get his hands on the ultimate prize.

I admittedly had low expectations for Tomb Raider 2018, having been deeply unimpressed by the two previous films, which took full-throttle material and incredibly made it excruciatingly inert, so it is a pleasant surprise to see that many aspects have been improved upon.

Firstly, the casting is better, with Vikander (The Danish Girl, A Royal Affair, Testament of Youth, Ex Machina) a much more satisfying screen presence. Focusing on her persona rather than her physical attributes, Croft seems like she might exist in the real world, and Vikander’s measured approach makes the growing absurdities in the story more palatable. Some may complain about the character’s largely missing sense of humour (although there is an amusing scene with Nick Frost, playing a pawnbroker), but it’s refreshing that Lara isn’t spouting cheesy one-liners every few minutes, and Vikander’s effective gravitas proves to be a much greater asset.

Wu (The Banquet, New Police Story, City of Glass, Overheard, Don’t Go Breaking My Heart), who unfortunately appeared in the horrendous disaster flick Geostorm, has chosen a superior Hollywood production this time around, and delivers a relaxed, likeable turn as Lu. West (The Wire TV series, Centurion, The Square) is affecting enough as Richard, Goggins (The Hateful Eight, Justified TV series) again plays the villain with suitable conviction, while both Thomas (Darkest Hour, The Party, Only God Forgives) and Jacobi (Henry V, Hamlet, Much Ado About Nothing) do fine with their surprisingly small roles.

Secondly, the screenplay by Geneva Robertson-Dworet (Captain Marvel, Sherlock Holmes 3) and Alastair Siddons (Trespass Against Us, In the Dark Half) noticeably wants to lay down a solid foundation for this latest incarnation, setting up an acceptable framework for the sequels that the studio so obviously want. While one applauds their intentions, there is however perhaps too much exposition put forward, which hinders the film’s ability to build up a full head of steam. Every time you think Tomb Raider is ready to take off, it will stop to indulge in another flashback or plot detail. The duo seem to be big fans of the Indiana Jones series, and borrows from them liberally but respectfully, especially Indiana Jones and the Last Crusade.

Lastly, the production has a talented director in Norwegian Roar Uthaug, who has delivered chills, thrills, drama and action in films such as Cold Prey (2006), Escape (2012) and The Wave (2015). Though the opening boxing sequence is ludicrously over-edited, initially filling fans of the director with doubt about how he will handle his first big Hollywood gig, he then settles in with a well-staged bicycle chase and port/boat foot pursuit, practical action scenes that sees Uthaug inventively wanting to balance the tangible with the impossible, particularly when CGI-heavy set-pieces take over in the second half.

Uthaug does have trouble in keeping the pace consistent, due to the aforementioned overload of plot information, and so that much needed spark and adrenaline-pumping excitement only surfaces in fits and starts, and it leads to a frustrating viewing experience, as you want the film to finally kick into gear. It is a pity Uthaug wasn’t given greater control, as he has shown in the past of being compact without sacrificing the story and its characters’ compelling elements. Even with the assistance of veteran editors Stuart Baird (The Omen, Superman: The Movie, Lethal Weapon 1 and 2, Skyfall) and Michael Tronick (Midnight Run, True Romance, 2 Guns, Bright), Tomb Raider never attains a genuine flow, and if just ten minutes were trimmed from its 118 minute running time, it could have become much brisker viewing.

The film is nicely shot by cinematographer George Richmond (Wild Bill, the Kingsman films), but the CGI effects are variable, especially so during the finale.

Tomb Raider is definitely better than expected, rising above a number of plentiful reboots that have been filling cinemas in recent times. But in doing so, it now makes the flaws that hinder the film’s total success doubly irritating. While it may not be in the same league as the first three Indiana Jones adventures, this new-look Lara Croft is worth the trip, offering up moderately involving entertainment. Now that the groundwork has been laid, let’s just hope it is full-speed ahead for Chapter Two.