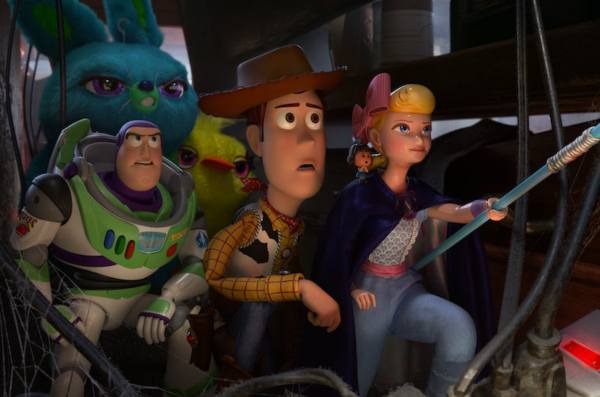 In 1995, after seven years of struggling production, the newly developed computer graphic studio known as Pixar has introduced their first animated feature Toy Story, to the world. It was beloved by millions for its simple yet effective tale of toys coming to life, innovative computer animation, and a cast of memorable characters. It also made animation history as the first ever full-length computer animated feature, in a similar impact as Walt Disney’s Snow White did. Because of Toy Story’s success, many other computer animated studios, such as DreamWorks and Blue Sky, were created. While Pixar continues its library streak of original movies, Toy Story spawned a huge franchise, including two sequels, a TV spin-off, shorts, specials, video games, merchandise and recently a theme park expansion. I always have fond memories with Toy Story growing up, whether it was dressing us Woody for Halloween or playing with the Toy Story…toys. But, that’s a different story; let’s move on.

Previously in 2010, Toy Story 3 was released and everyone was captivated by its dark and emotional tone and believed that it ended the story on a strong note. That is, until a few years later, Pixar announced that a fourth installment was in development and the reaction was mixed. Admittedly, I was skeptical and thought the third film would stop there. Surprisingly, its production history is eerily similar to the first films. Originally, the movie was directed by John Lasseter with the story being a romance comedy involving Woody and returning character Bo Peep, whom is based on his wife Nancy. However in 2017, Lasseter got fired from Disney after revealing his unintentional yet regrettable history and the story had to be rewritten with co-director Josh Cooley taking full responsibility. After years of skepticism, how does Toy Story 4 hold? Unexpectedly well.

During a road trip, Woody (Tom Hanks) and Bonnie’s new toy Forky (Tony Hale) get lost from the others and must find their way back. Along the way, Woody comes across Bo Peep (Annie Potts) and soon learns a deeper, meaning about a toy’s life and purpose.

At first, the story would sound like a clichéd and predictable buddy comedy with Woody and new character Forky. But, as soon as, Bo steps in, the remainder of the story reignites the same wit, charm, imagination and emotion that makes us remember why we love Toy Story. Like the previous films, the story brings up refreshing scenarios that creatively fit well into a toy’s perspective, like a custom made toy coming to life, a toy’s desperation for a child’s love, and how a toy makes happy memories for a child. Though the story was rewritten through creative differences, you can sense  John’s story fingerprints throughout the movie, maintaining its focus on Woody and Bo’s relationship and their philosophies on being a toy. The comedy is consistently spot-on thanks to physical humor and the performances provided by the cast old and new. As for the emotional aspect, without spoiling, I’d recommend having tissues on standby.

With so many characters old and new, it would be hard to focus on which character the story centers on. But, like the previous movies, Toy Story always manages to balance quantity and quality. The voice cast did a remarkable job, especially Tom Hanks. Woody, now living with Bonnie, has a difficult time moving on and trying to make everyone happy. But, when he reunites with Bo, he soon overcomes his fears of being a lost toy. Bo Peep is most definitely the most highlighted character since her absence in Toy Story 3. She has evolved to an independent, adventurous toy while maintaining the charm from the first two movies.  Buzz and the other toys’ roles are more subdued but still provide support that would motivate Woody’s goal.

On note worth noting that Don Rickles, the vice of Mr. Potato Head passed away some time ago and his archive unused recordings from the previous films were integrated in, like Doc Hudson in Cars 3. As the new characters, as tradition as the movies go, they are charming and entertaining in their own merit. Forky is a Spork toy made from trash and goes through existential crisis on being a toy. Duke CaBoom is the daredevil action figure that constantly fails to pull stunts, despite his high-spirited nature. Bunny and Ducky are the hand-stitched plush duo that deliver big laughs, thanks to Kay and Peele’s improv. As for the villain Gabby Gabby, I don’t want to mention much about her but let’s just say Lotso was more threatening. There are also some voice cameos that you should keep your ears out for; you’ll be like, “Oh, my god! They got  in this movie?”

This was complicated to go through since I know there will be countless debates about its existence. But, in the end, I had a blast watching this movie. Toy Story 4 is an unexpected surprise that is executed cleverly and creatively and helps us remember why we love  Toy Story. I’d highly recommend this movie to families, animation fans, and people who love toys. It is uncertain where the franchise will go in the future, but whatever happens: “To infinity and beyond!!!”