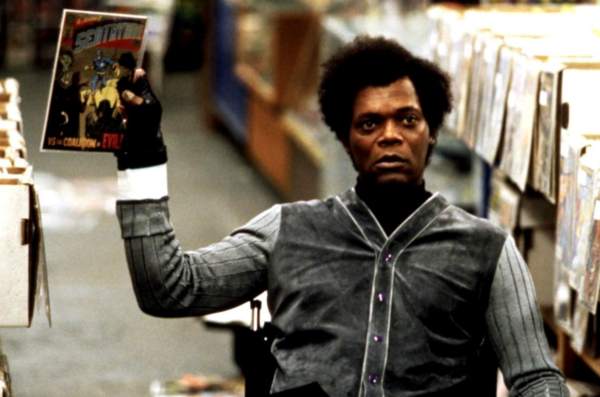 The story of Unbreakable follows David Dunn (Bruce Willis), a security guard who survives a train accident on his way back home from a job interview. Dunn being the sole survivor of the train crash is contacted by Elijah Price (Samuel L. Jackson), a brittle-boned man who believes he has an explanation for Dunn’s unexpected survival. Elijah suffers from osteogenesis imperfecta, a disease that results in bones breaking very easily; he believes Dunn is at the opposite end of the fragility spectrum and is practically unbreakable.

Elijah Price owns an art store that sells vintage art from comic books, an interest that he picked up during childhood as he was constantly bed-ridden due to broken bones and had nothing else to do other than read. After the train crash Elijah sent Dunn a note asking “How many days have you been sick?”; the note got Dunn curious enough to meet with Elijah. When Dunn met Elijah in person he was reluctant to believe what Elijah was telling him; to him Elijah might have seemed like a comic book fanatic that desperately wanted “super heroes” to exist.

The question Elijah posed in the note got Dunn to consider the possibility enough for him to ask his wife and his boss at work whether they recall if he has ever been sick, he had not been, his boss even thought he was trying to make a point and offered him a raise. What really struck an emotional chord with me was how badly Elijah wanted to believe that someone who was his opposite exists; he went to great lengths to find Dunn; almost like he believed it was his life’s mission.

Unbreakable is not your standard super-hero movie; if anything, during some parts I would not call it a superhero film at all. It is a much slower paced film than you would expect; and I do not mean that in a negative way. The way the story is unraveled is absolutely captivating; I found myself transfixed to the screen eagerly waiting to see how everything would unfold. I usually find myself disliking superhero movies because of the excessive use of CGI explosions, violence and firefights to amuse the general public and substitute a good plot-line. This film has none of that, it was by far the most “realistic” sci-fi film I have seen. The film barely has any action scenes at all; it has almost a sort of minimalistic feel to it and that is what makes it so captivating.

The actors could not have been cast more appropriately and they played their roles perfectly; Bruce Willis’ deadpan reactions to everything going on was very fitting for how you would expect a person with heroic attributes to be; quiet yet intense. Samuel L. Jackson also played his role to perfection, he felt very authentic almost as if he was actually the character he was playing in real life. The only character I found off putting in the entire film was Joseph Dunn’s son, Joseph Dunn (Spencer Treat Clark). I just felt like he was slightly too intense and emotional for such a side role in the film; he felt out of place.

The cinematography was hypnotically slow-paced and a lot of scenes were shot from atypical angles which gives the film a sort of square comic book feel. The ambient was slow, gloomy and dark from the get-go; almost like the director (M. Night Shyamalan) was trying to say this movie will not be upbeat whatsoever, but psychological and deep.

Shyamalan is known for his mind-breaking plot twists (i.e. Sixth Sense) and thematic fixations on a few elements such as supernatural gifts, second chances and discovery of purpose. Without getting too specific I’ll let you know this film is no exception; it’s a definite must see for anybody who appreciates quality film-making.