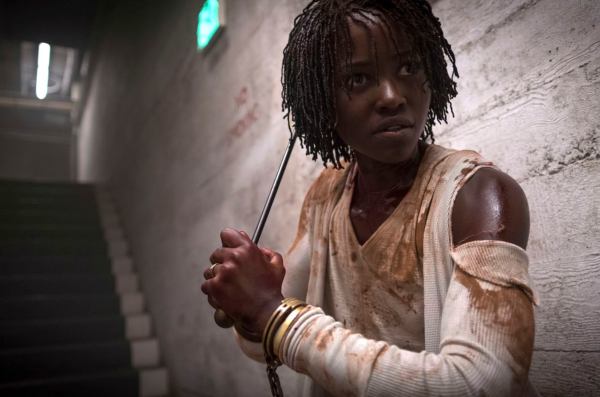 “If you want to get crazy, we can get crazy!” Jordan Peele (Get Out) has brought us another A-list horror film with Us. From the creepy symbolism of rabbits to the edge of the seat suspense, this movie is a definite thriller. There are a number of fantastic aspects of this movie, from the characters, to the twists that occur, it easily maintains the attention and interest of the audience throughout the entire film.

From the children to the adults, the casting in this movie was very well done. Winston Duke (Black Panther), who played Gabe, portrayed an astonishing performance with his quick wit and natural humor. Lupita Nyong’o (Little Monsters, Black Panther), played Adelaide, who was our main character in the film. Her raw talent took over the screen and her emotional depictions encompassed the theater. The chemistry these actors had together, with the actors portraying her kids, really gave the movie a family feel. It was a compilation of little things, such as subtle bickering between the kids that allowed the movie to feel like it was actually happening.

Us, has a lot of small unexplained details which is fun for the audience to try and piece together. This movie is one that we can go back and watch multiple times and always pick up on something new and connect dots that may not have been noticed before. Some minor ones include the incredible display of symbolism of rabbits, a bible verse that doesn’t make sense until you look up the quote, and the harsh truth of different upbringings in society.

What is extremely cool about Peele’s style is that trying to predict the movie is not an easy task. The excellent display of suspense is evident when you are expecting one thing to happen and then something completely different happens instead. Throughout the film, moviegoers will be at the edge of their seat and drowning in suspense. The pace of the movie assists with understanding the different events that are occurring. The occasional flashbacks help the watchers in connecting new fragments of information as well as set up an unforgettable ending.

This slasher type movie does not disappoint when it comes to the action scenes either. The action sequences are carefully articulated and provide background music that will get your emotions running. The music keeps people at the edge of their seats playing throwback tracks like, “I Got 5 on it” by Luniz as well as a surprise track from the band NWA which is heard at the perfect time. Other aspects of these action sequences contain innovative situations that may cause your boat engine to fail at the worst time.

The actual story being told in the movie slowly gets pieced together and relies on audiences to figure out aspects for themselves. The tethered, who are the lookalikes in the film, keep most of their ambitions hidden. There is backstory that gets shared but Peele keeps the audiences gritting their teeth and wanting more. The movie ending leaves your jaw dropped and mind going crazy.