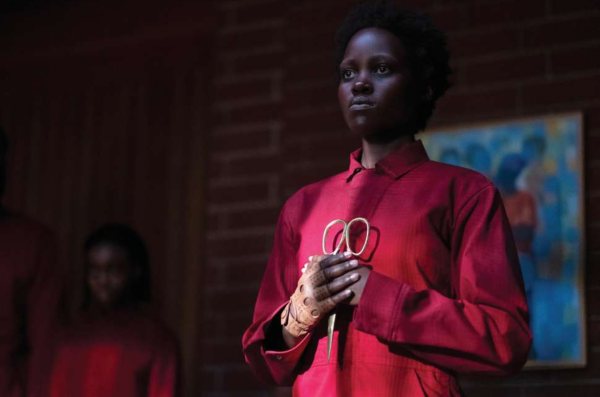 In our mad and furious times of regression and exclusion, Jordan Peele (demonstrably one of the most exciting filmmakers working today) is taking every opportunity to work against the grain, in the best possible way. With Get Out, he left the awards season with an Oscar for his superb screenplay but, quite frankly, could have (and probably should have) garnered more praise for his debut. In any other year, Daniel Kaluuya could have won Best Actor, Allison Williams could have won Best Supporting Actress and, in a year of surprising Best Picture nominees, quite frankly, it wouldn’t have been outside the realms of possibility had Get Out won the grand prize. It was multi-layered, subtle, satirical and terrifying in places. Everything I wanted from a horror/chiller. Post-Get-Out fame, I had hoped for something quite extraordinary from Peele’s sophomore outing. What I was not expecting, however, was the unexpectedly quick turnaround, resulting in Us.

Us tells the story of the Thomas family, with particular focus on Adelaide (the mother, expertly played by Lupita Nyong’o), as they take their yearly vacation to their beach house in Santa Cruz, California. The film opens in 1986, where a young Adelaide is visiting the Boardwalk amusement park with her parents and how, otherwise engaged, she strays away from their sight and experiences something unrelentingly harrowing in a hall of mirrors. The film then jumps to the present day as we see a resentful Adelaide trying to persuade her husband Gabe (again, brilliantly played by Winston Duke of Black Panther fame) to not visit the Boardwalk this year, as she’s scared that something is following her. But when a family of doppelgängers are seen to be trespassing their summer home, things take a turn for the worst.

I shan’t spoil any of the plot points but what I will say is this: no matter how scared you might be whilst watching, do not ever take your eyes off of the screen. The thing that Jordan Peele does better than any other filmmaker is the level of detail in every single shot. Even if you think there’s a fairly empty mise-en-scéne, you’ll be mistaken. But Peele’s brilliance doesn’t stop there, he isn’t just a visual storyteller (brilliant though he is) the way he understands and conducts the mythology created in his films is incomparably impressive. You don’t have to ‘go with it’, you’ll just simply believe in it. You believe in everything because everything is so hauntingly believable. Peele frightens you into submission, and coerces you into belief. Peele writes and directs with such strength and conviction that I find it virtually impossible not to be completely swept up in those truly magnificent stories.

This is the kind of horror movie I absolutely adore: it isn’t scary for the sake of being scary. It is scary because it necessitates the progression of the plot. It’s at its scariest when you’re so emotionally invested in the characters that you’re fearing their next move. And, boy, should you fear the next move.

Us took me to a place of transcendence. A place I had never visited in a film before. I left the screening, in which there was only one other person, and wanted to return and re-watch immediately.

The twist left me speechless. The ending left me haunted. The imagery left me shocked. Us left me questioning everything I’ve ever known. The beauty of Us is that it isn’t as one-track-minded as Get Out, which was explicitly about race and race-relations. Around every corner, after every turn, Us seems to be commenting on something different, seems to be about something else and yet still feels like its own singular entity. Us is extraordinary. Us is outstanding. Us is everything above and below. Us is raw and cooked. Us is black and white. Us is us and them. Us is Mexico. Us is the US. Us is united. Us is divided.

I guess, ultimately, Us just points the finger at, well… us.

My film of the year… so far.