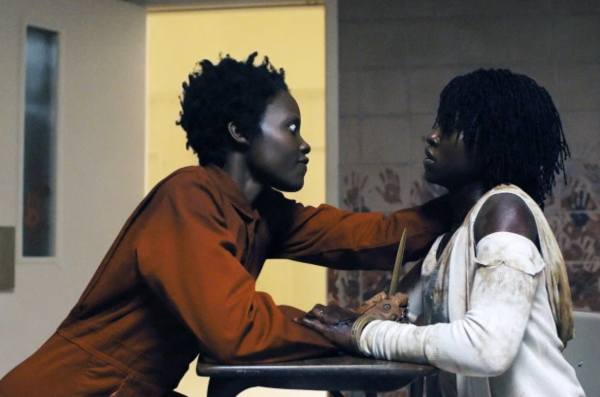 I had high expectations for this film as the trailer had made it look really creepy, unfortunately, it was excruciatingly disappointing. The beginning starts out quite good; a family – mum, dad and younger daughter (who is maybe seven years old) are at a fare ground. The mum goes to the toilet, placing their daughter’s safety with the uninterested dad. While dad is too distracted, the daughter wanders off. She discovers an attraction which is filled with mirrors. Once inside exploring, the lights go off and the daughter sees another girl, identical to her behind one of the mirrors. The girl is not a reflection; we don’t get to see what happens inside this place, we just see the little girl’s eyes widening with fright.

The next scene is based in a psychiatrist’s office. The mum is concerned over the daughter’s lack of speech since the incident. The psychiatrist advises the parents to get the daughter involved in creative activities to help her express herself. The daughter then discovers a love for ballet and becomes a dancer.

Then the film skips ahead to show the daughter as a grown woman, married with a teenage daughter and a younger son. The family go for a vacation, back to the same area where the incident in the mirrored attraction happened and understandably the mother becomes anxious. She breaks down in the holiday home, telling her husband about the incident and how she fears this other little girls is coming for her.

The husband doesn’t take her seriously and is quite similar to her father. Literally within thirty seconds of telling her husband about the incident the electricity cuts off. It seems too coincidental that the lights cut off and the action is about to start as soon as she tells her husband about the incident. Also if you were traumatised by an incident to the point where you lose the ability to speak, are you going to back there and take your children with you?

The family realise there is another family standing outside in the darkness, holding hands. It appears the family composition is made up of a mum, dad, daughter and son. At first the husband doesn’t think this is threatening and goes outside to try and talk to them, find out why they are there. The family do not communicate with him even though he makes several attempts. He still thinks that his wife is wrong and there is nothing to worry about. His character is supposed to be funny but the humour used detracts from what should a disturbing experience.

He takes out a baseball bat to try and scare the family away but this doesn’t work and the mysterious family charge forward and invade the home. Once inside the family realise that the intruders are clones of them. The mother clone is the only one who can speak but even at that her voice and English are difficult to hear and to understand. Each of the intruders carry scissors as weapons.

The intruders play a game of cat and mouse with the family who manage to escape from the holiday home. They flee to the home of another family, their close friends. When they get there they realise that their friends have been murdered; this family were murdered by a different set of clones, their own clones.

The original family members start killing these clones, easily, even the children. This is not portrayed as a big deal, especially the fact that the children have taken the lives of these clones. They show no shock, guilt, remorse, or any emotion about the fact they have just killed. They all just seem to take this weird, terrifying experience in their stride.

The cat and mouse game continues without much action, for a while. The young boy figures out that whatever action he takes, the clones, who are tethered to them, also have to copy those actions. His clone has lured the family to a trap where there is gasoline on the ground and he has a match. The little boy, who is face to face with his clone, walks backwards. The clone has no choice but to do the same and walks away from the gasoline and into an already blazing fire behind him.

The rest of the family members don’t seem to understand this and continue to try and defeat their clones in other ways. The little boy is kidnapped by the clone mother. The original mother sprints back to the mirrored room where it all began. She uncovers a secret lair which is about the size of a train station but somehow contains the clone of everyone in America, all copying the actions being done by the people above. There is no explanation about who made the clones or why. There is no sign of any scientists running the place. There are rabbits everywhere in this underground layer and no explanation about why they are there either. Who feeds these clones and keeps them alive? Also if there is nobody there to prevent them from leaving then why didn’t they just leave years before?

In the final scenes the original mother and the clone mother are fighting for survival. The clone mother keeps ballet dancing her way out of the attacks and slashes the original mother repeatedly. She saw her son use his actions to beat his clone self so why doesn’t she just do the same thing? Instead of allowing herself to be slashed? In the end she does defeat the clone mother, quite brutally. We then realise that the mother of the original family is the villain. When the little girls saw each other in the mirror attraction, the clone stepped out and somehow put the little girl in her place behind the mirrors.

I can see what they were trying to do with the twist but during a speech given by the clone mother she says that they (whoever they are) learned how to clone the bodies but not the souls; this makes no sense however, as all the way through the mother of the original family is loving and fights to look after her family, indicating that she has a soul.

For me the film didn’t make sense and the humour was inappropriate, detracting any element of horror.