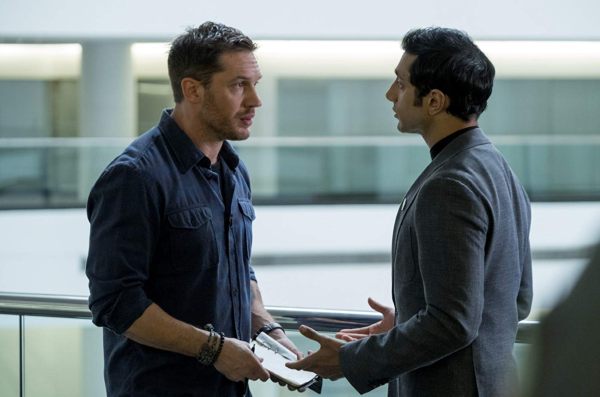 Buying my ticket for Marvel’s latest blockbuster, Venom, an anti-hero rather than their usual caped crusaders, I’ll admit, after reading quite a few scathing reviews about the movie, I was a little sceptical. But hey, I thought as I sat down with my large Pepsi, it’s Marvel, it’s Tom Hardy, we’re going to keep an open mind. And so I did, and you may disagree with me all you want to, but I bloody enjoyed this movie. I won’t deny it certainly had its issues, but I still had a good time.

A lot of the reviews are calling this adaptation of the Marvel anti-hero ‘dull’, ‘a mess’ ‘not the superhero movie you were looking for’. Hardy himself even admitted that his ‘favourite 40 minutes’ were cut from the movie, however the Peaky Blinders actor did a damn fine job in the main role of investigative reporter, Eddie Brock as he goes rogue to uncover the ugly truth behind the Life Foundation owned by the movie’s villain, Dr Carlton Drake, played by Riz Ahmed.

Admittedly, I felt Ahmed’s portrayal of the character felt more like a sullen teenager than a Big Bad; there was more of an urge to send him to his bedroom to think about what he’d done than to hate him for what he was up to. This by no means makes him a bad actor – his performance in Rogue One is something I hold dearly in my heart, and perhaps this is why I felt he was too lovable to play a genuinely nasty villain.

This time the Big Bad’s big bad plan is to combine symbiotes with humans: enter Venom via lots of flashing lights and noisy alarms.

Again, a lot of the reviews accuse this movie of being too much buddy-cop and too little horror, but I found the relationship between Brock and his cannibalistic parasite to be one of the film’s best features. Their bromance gave the movie a nice element of humour, though I do agree that this was sometimes misplaced, and there were occasions where perhaps a little bit of horror would have worked over comedy. Overall, though, I found the humour a good way to establish the significant difference in morals between both protagonists. Imagine what Date Night must be like!

So, yes, I’m not going to stand up and say Venom is the perfect movie and there’s absolutely nothing wrong with it, because that would be a dirty great lie. With the quality of Black Panther, Thor: Ragnarok and Avengers: Infinity War coming from the same franchise, I’m not surprised some people were left disappointed. However, we also have to remember that this same franchise also produced Hulk in 2003. Remember that movie? I try not to either.

I’ll agree that it is not quite up there with other Marvel masterpieces, but it’s still an enjoyable movie in my book; definitely worth the watch.