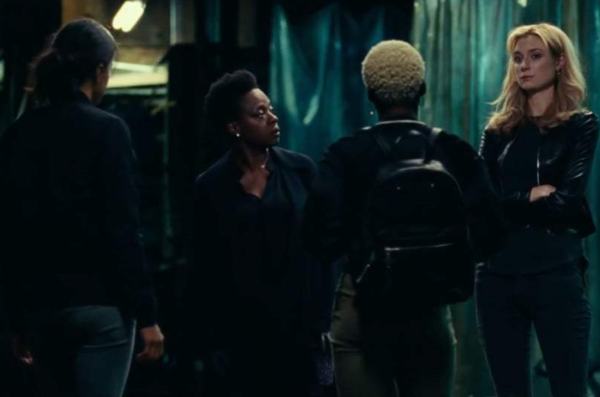 After his Academy Award winning triumph in 2014 with the powerful drama 12 Years a Slave, film-maker Steve McQueen initially seems to have made an unusual choice in selecting a heist movie, but the political/social commentary that made his previous features so compelling, thankfully still resonate throughout Widows, and like Luca Guadagnino’s Suspiria, is a remake (in this case, a 1983 British mini-series that was based on the Lynda La Plante novel) that uses a well-known framework to construct something genuinely thoughtful and relevant. The film opens with a robbery on the streets of Chicago that goes very wrong, involving seasoned criminals Harry Rawlings (Liam Neeson), Carlos (Manuel Garcia-Rulfo), Jimmy Nunn (Coburn Goss) and Florek (Jon Bernthal). With $2 million in their escape van, the crew are eventually cornered and shot dead by police, and this news quickly reaches their wives.

Veronica (Viola Davis) was married to Harry, Linda (Michelle Rodriguez) to Carlos, Alice (Elizabeth Debicki) to Florek, and Amanda (Carrie Coon) to Jimmy, and this devastating event affects each one in various ways. Soon after the funeral, Veronica is visited by Jamal Manning (Brian Tyree Henry), a renowned gangster who is now running for political office, and is informed that the money Harry stole belonged to Jamal, and was going to help fund his campaign, a campaign that may now stumble due to this sudden lack of cash. Giving the grieving widow one month to pay it back, Jamal threatens violent payback if she fails to complete this task. When Veronica’s driver Bash (Garret Dillahunt) supplies her with a mysterious envelope, it leads to a notebook Harry kept hidden, filled with heist details past, present, and most telling, future.

Seeing the next heist could bring in $5 million, Veronica contacts the other widows, successfully getting help from Linda and Alice, while Linda brings in hairdresser/babysitter Belle (Cynthia Erivo), who is running herself to death trying to keep a roof over her family’s head. Playing a large part in proceedings is the upcoming election in Chicago’s 18th District, where corruption and a cruel class system are the norm, with Manning and his psychotic brother Jatemme (Daniel Kaluuya) up against Jack Mulligan (Colin Farrell), whose father Tom (Robert Duvall) has ruthlessly ruled the area for decades, as their family have for generations. Widows is so much more than just an action crime flick, with screenwriters McQueen and Gillian Flynn (Gone Girl, Sharp Objects TV series) approaching the women’s plan in an intriguingly ambiguous manner, as the money they are going to steal has been funnelled and kept from the very community that is starved of opportunity and hope.

One of the best moments in the film is a stunning one-take sequence, where we see Jack Mulligan driven from a run-down African American neighbourhood where he is championing change, and the locals are struggling to make ends meet, to the lavish, high-end suburb where he and his campaign base is located, all the while complaining about what is happening in his own, privileged bubble. It is a beautifully executed scene that illustrates perfectly what McQueen is exploring throughout the entire picture. Through Farrell’s and particularly Duvall’s characters, McQueen pointedly criticises societal imbalances, where people with power and money can dictate how the system should be run, stifling any chance of broader equality, no matter what your race, color, or religion is.

Duvall spouts the kind of rhetoric that is becoming uncomfortably routine in offices of power around the world. Davis (who finally got an Oscar for her performance in Fences) is again electrifying, commanding the screen from start to finish. Debicki (The Night Manager mini-series, The Tale) shines as Elizabeth, Rodriguez (Girlfight, The Fast & The Furious series) gets her best role in ages as Linda, while Henry (Hotel Artemis, Atlanta TV series) and Kaluuya (Get Out, Black Panther) excel as the notorious Manning brothers. Despite limited screen time, Neeson also manages to leave an impression, and Farrell and Duvall both give wonderfully committed performances.

As is expected with a McQueen film, production values are outstanding, with brilliant cinematography by regular collaborator Sean Bobbitt (Hunger, Shame, 12 Years a Slave), capturing so many details in each frame; split-second perfect editing by Joe Walker (Hunger, Harry Brown, Arrival, Sicario); and a surprisingly measured music score by Hans Zimmer (The Rock, Inception, The Thin Red Line). Widows may be bleak viewing, but the way in which it is crafted and executed is an absolute joy, restoring one’s faith in Hollywood. With so many loud, hollow blockbusters filling multiplexes (Fantastic Beasts : The Crimes of Grindelwald being a prime example), audiences should enthusiastically embrace this tough, intelligent, and layered drama/thriller, made by people who treat not only the art form they work in with respect, but also those who pay to experience it.