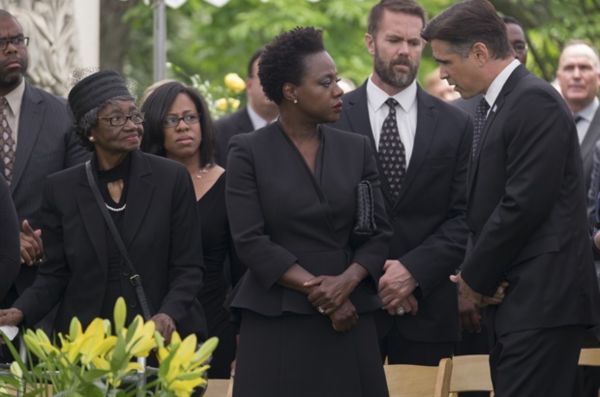 The initial marketing of Steve McQueen’s Widows portrayed a darker version of this year’s all-female heist thriller Ocean’s 8, with a plot focused on four women operating in what is clearly a man’s world as they attempt to complete their late husbands’ final job. In reality, this adaptation of a 1983 ITV series, penned by McQueen and Gone Girl writer Gillian Flynn, is far more complex. Widows’ knotty but excellent plot focusses on the intersection between organised crime and local politics, as the titular widows attempt to emulate the prolific robber Harry Rawlins (Liam Neeson) against the backdrop of an alderman election between the nepotistic Jack Mulligan (Colin Farrell) and the former crime boss Jamal Murray (Brian Tyree Henry).

The setting is Chicago’s 18th Ward, a place where nobody can keep their nose entirely clean. One of the film’s key assets is its ensemble cast; there are strong acting performances all round, particularly from Henry and Daniel Kaluuya as the menacing Manning brothers and Elizabeth Debicki as Alice Gunner, a savvy abuse victim finding herself amidst the chaos of the heist. Above all, the film’s lead, Viola Davis, portraying Veronica Rawlins, is superb. Davis’ emotional range stretches from wounded grieving to grim determination, often within the same scene; minute details in her every expression create a heroine for audiences to root for despite a seemingly cold exterior. A second strength of Widows is its thematic variety, which is so often absent from other heist films (including the Ocean’s franchise).

While maintaining all of the different strands of plot, McQueen and Flynn have managed to focus on ideas as diverse as father-son relationships, police brutality, the dishonesty of modern-day politics, the contrasts of Southside Chicago, and the different ways that people process grief. Chiefly, though, the film is a celebration of female inner strength, exhibited by each of the four main characters. The character arcs of Veronica and Linda Perelli (Michelle Rodriguez) are particularly focused towards women struggling to continue with everyday life while processing their husbands’ deaths. Widows’ trailer concludes with Davis’ line “no-one thinks we have the balls to pull this off”, a quote that seemed clichéd in that instance but lands perfectly in the real film, where our four heroines thrive on being underestimated.

There are a few weaknesses to the film, which barely detract from the viewing experience but are worth briefly discussing in a review. First, Widows could have been subtler in establishing its villainous characters; this is particularly true in the case of the Manning brothers, shown to be malicious by their willingness to harm the clichéd vulnerable targets of a dog and a disabled man. Tom Mulligan (Robert Duvall) is also too quickly shown to be a villain of the film, being both patronising towards his son and overtly racist in his opening scene. Secondly, there is a shock twist half-way through that does not fully pay off, even in an exciting and bloody finale.

Still, this is an excellent film and an impressive addition to McQueen’s oeuvre. Viola Davis will surely be a frontrunner for Best Actress at the upcoming Academy Awards and the film deserves several other nominations. Widows is a bloody heist thriller that respects the intelligence of its audience and touches on the important modern-day issues of class, race and gender. All of this makes for an excellent film.