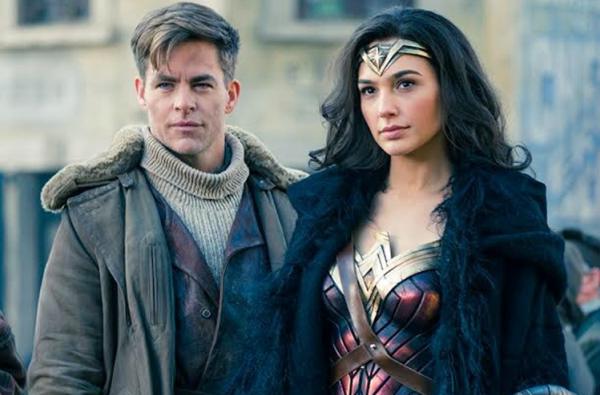 Wonder Woman staring Gal Gadot and Chris Pine is the first ever standalone film about Princess Diana (aka Wonder Woman) from DC Comics.

The plot revolves around Diana, a warrior princess from a race of women known as ‘Amazons’. She journeys to London along with a British spy named Steve Trevor in order to kill Ares, the God of War and stop the war being fought. The plot is fairly straightforward and easy to follow with a slight twist towards the end. As far as the pacing is concerned, it gets a bit boring at places especially during the first half, but gradually picks up pace during the second half.

This movie has extremely picturesque scenes, which depict a diverse set of emotions accurately and in a flamboyant manner. Right from the bright and glorious scenes shot in Themiscyra (home of the Amazons) which depicts hope and prosperity up to the dark and gritty scenes of War depicting distress and futility, this movie aptly captures the emotions it wants to evoke from the audience and in my opinion is one of the main attractions in this film.

The characterization of both Wonder Woman and her love interest Steve Trevor are excellently portrayed giving them both a background, purpose and meaning in the film. The on-screen chemistry between the two is also something to look forward to which is very well written and especially noticeable towards the end of the film. The only gripe I had with the portrayal of Steve was that during the final battle, his role in aiding Wonder Woman was almost negligible and he had little to nothing to offer save his love for her. The villain (Ares), was not very well written, lacked the ability to seem even remotely threatening and in my opinion was too easily and conveniently defeated towards the end.

As far as the acting is concerned, Chris Pine and David Thewlis (Ares) did a fantastic job and their delivery was spot-on. Chris Pine especially did a brilliant job and I personally enjoyed him the most in this movie. The support characters also did a fantastic job, setting a lighter tone and a humorous mood. The same cannot be said about Gal Gadot. Though she was good for the most part, her delivery in certain parts of the movie really killed the emotion and left me wanting better.

The action sequences were exhilarating especially the one involving all the Amazons. However, during the second half there were some scenes that had the potential to be great but were ruined by the abusive use of the slow motion effect. The slow motion effect looked great in a couple of scenes but its repetitive use made it get stale and boring after a while. Another thing that bothered me was the fact that they made Wonder Woman sail through most of the action sequences while barely breaking a sweat. While it can be argued that she is a superhero and hence faces no mortal threat, to me it looked more like the scenes were badly choreographed and implausible even for a superhero movie.

The movie score was good and did its job. The only thing that stood out was the main Wonder Woman theme, which sounded great. Especially when it was played during the heat of a battle.

In conclusion, in an era where a superhero movie is not uncommon to the average moviegoer, the movie was above average and in my opinion was an amalgamation of rehashed themes that did not really have anything new to put forth. That being said, it has far more depth and coherence than its predecessor DC movies, thereby setting up an enormous milestone in the favour of the DCEU. The highlights of the film are the characterizations, the action sequences and the picturesque visuals and cinematics.