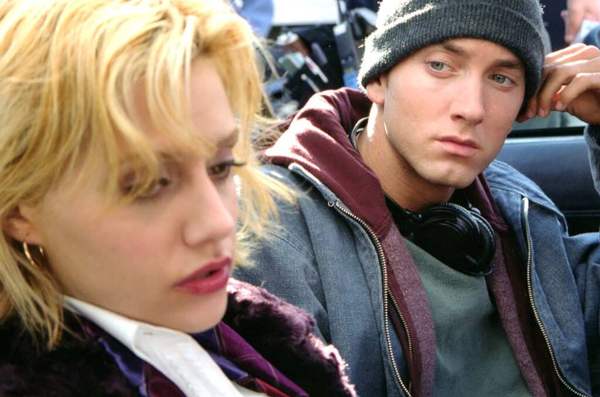 As a tremendous fan of the rapper Eminem, I wanted to watch this movie to experience this seminal moment in his career, the inspiration of his most famous song, and an insight in to the early days of his life. I expected either to get a brutal and depressing drama, or a simplistic but inspiring sports movie. Unfortunately, I got neither.

Eminem plays a poor young man living in a trailer park with his single mom (Kim Basinger), her semi-abusive boyfriend (Michael Shannon) and sister. He aspires to be a successful rapper and competes in local rap battles. His first attempt is an utter failure, wherein he is left speechless and his booed off the stage. He is motivated by his situation and encouraged by his friend group of aspiring rappers to improve his skill and compete in the next one, while they clash with the local rap gang “Free world,” led by Papa Doc (Anthony Mackie).

8 Mile is evidently a sports movie in everything except for actual subject matter, with many of the standard tropes, such as the group of bullies, the encouraging best friends, the jerk at home to make is life miserable, etc. These are present and not varied much from other examples in other movies.

Unfortunately, 8 Mile doesn’t even get the basic appeal of a sports movie. Firstly, we never see the main character actually learn to improve or develop his skill. He doesn’t learn a new technique, he doesn’t overcome some personal problem that prevents him from rapping well, and he doesn’t get trained by a wise mentor. He fails the first time he tries to rap battle, but seems to be an expert at it the next time he tries it. Another large problem is that the audience doesn’t feel his struggle as much as we should. Yes, we see his difficult home life and his relative poverty. However, we see a lot of him having fun with a solid group of friends, being witty, instantly getting girls, getting high and partying all the time. His mother implausible cries that no one will want her, even though she is played by Kim Basinger and looks at the age of 40 better than most women in their prime could dream of. Additionally, she suddenly gets lucky and has wins money can use to alleviate her financial problems. This is a bizarrely placed development takes away some of the stakes of the rap battle before it even starts. We see glimpses of the hero’s trouble, but we do not truly feel that he is a man fighting to escape a horrible situation.

The biggest attraction is the rap music, which was excellent throughout. The rap battles at the end were unrealistically clever and polished. Nevertheless, they were incredibly fun to watch and showed Eminem’s mastery of the musical style. Although much of the movie focuses on the antics of Rabbit and his group of friends distracted from the pain storyline, those scenes were enjoyable. The characters were charming enough and well performed.

Additionally, the cinematography and color scheme of the movie lent the bleak and grungy feeling that the story itself did not sufficiently deliver. Despite being a thematically simple film, the ending battle contains a clever message. In his final round, the main character starts by proudly admitting to every embarrassing flaw about himself, leaving is opponent speechless in his attempts to insult back. It gives a strong message that once we accept our flaws, no one can use them against us. This was clever take on a profound and relatable message that elevated the simplicity of the rest the movie.

If you are a fan of Eminem, enjoy good rap, or want some light entertainment, this movie is good for those things. However, if you really want an emotional journey about overcoming obstacles, this movie will disappoint you. It does not produce the drama promised in the lyrics of Lose Yourself.