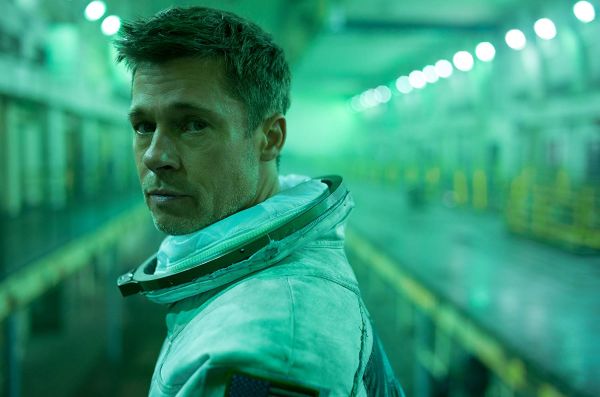 A Sleek Mediation Between Space Spectacle and Family Sentiment

Ad Astra is a film of high pretensions, lofty ambition and some imagination, making it at the very least noteworthy in the bravery and flair.

Pitt’s Roy McBride is the latest man flung through time and space, following luminaries from 2001, Gravity and of course Interstellar. But it is Apocalypse Now that most closely reassembles the journey McBride finds himself in. Having been charged with the investigation of the mysterious Lima Project once led by his decorated father – McBride Senior – Roy is forced to revisit his past as he first hurtles through space. Director James Grey imagines space less of a wild west frontier and more of an already semi colonised outpost of mankind. He in particular, takes great pleasure in presenting the moon as an already commercialised fortress, albeit one fraught with petty banditry and piracy. The human codes of life have only been tentatively established, and facilities in deep space ran by conglomerates have only been half civilized. As McBride journeys beyond the thick air of corporate paranoia and greed cling to the screen.

With the spectacular backdrop of the wonderful black canvas of space, Pitt provides a very Captain Willard-esque narration, musing and recalling his relationship with his distant father in Malick like mystique.

It is this relationship between provocative imagery with awesome staying power and philosophical dialogue that underpins Ad Astra.

It quickly becomes clear the film is thematically hinting at some kind of family showdown, in which the fate of mankind is intertwined with Pitt’s particular brand of absent father syndrome. The result is a perpetual balancing act between awesome visual spectacle, wonderfully captured by Hoyte van Hoytema and family drama, but this time set in deep space.

On occasion, this is an arrangement that sags and strains against the film’s excesses. And there are excesses. The running time for one is too long, clocking in around 20 minutes too long and the film’s slow meditative pace does not quite fully rouse itself for a wholly satisfying finale. The threads the film has been weaving together are not tied in in a way that is complimentary to the preceding two acts. Spectacle is used too often where sentiment should have prevailed and in the final 30 minutes the two forces swap positions.

This flaw holds no origin from the actors. Pitt is reliable, convincing and intense, the film makes a great deal over his heart rate having never exceeded 80 beats per minute even when subjected to the most pressurised situations space has to offer and Pitt’s unruffled demeanour makes this credible.

Jones for much of the film is more of an abstract, a representation of Pitt’s deeply held trauma. He is the Commander Kurtz of space, surely waiting in the dark for the return of his prodigal son. But when Jones does arrive, he provides a sense of reliable gravitas that his casting would suggest. The craggy old face, almost ape like in some shots, is convincing as the face of a man who has surely spent years on solitude in an anonymous pocket of space.

There is a certain sense of gravitas, macabre awe and sheer weight of occasion with Ad Astra, but it remains restrained, permitted to flow naturally rather than to become overpowering. Combined with a mesmeric score, Ad Astra reminded me in many ways of an opera piece, possessing the same regal elegance and cinematic pedigree.

For the most part, the moments of violence which punctuate the film’s eerie ambience are quickly moved on from and the ballet like pulsations return. The film’s union between patient, methodical and atmospheric storytelling and its episodic violence plays out uneasily. And when the film approaches the climax this tension notably ruptures, with Ad Astra caught between persisting with its thoughtful space melody and becoming increasingly aware it may need an injection of visceral intensity to conclude a whole lot of naval gazing and stakes building.

When it becomes clear Ad Astra cannot wrap up all of the threads it has been weaving it is hard not to come away with a sense of lingering disappointment. Ad Astra is the work of someone who deeply loves cinema and there are more than just moments here when we see visual splendour in lieu with efficient storytelling.