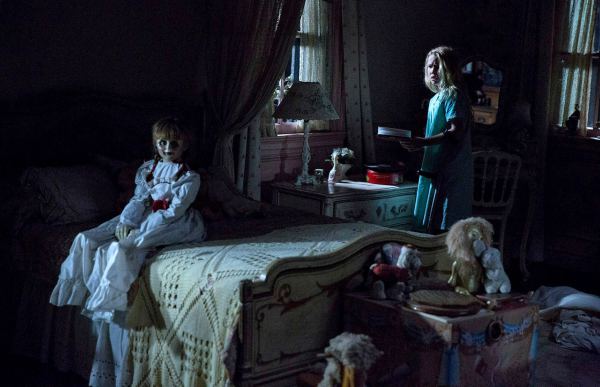 Supernatural horror sequel directed by David F. Sandberg which follows the tale of a dollmaker and his wife, Samuel and Esther Mullins (Anthony LaPaglia and Miranda Otto), who several years after the tragic death of their little girl, decide to open their home to a nun, Sister Charlotte (Stephanie Sigman), and several girls from an orphanage that has been closed. Very soon, however, they become the target of the dollmaker’s possessed creation, Annabelle.

Janice: This is our new orphanage?
Nancy: It’s as big as a castle.
Samuel Mullins: Feel free to use the house as you see fit. Mrs. Mullins and I stay down here. Your rooms are upstairs.

[as Janice goes to open one of the bedroom doors]
Samuel Mullins: It’s locked, and it stays that way.

[after hearing music playing in Mullins daughter’s bedroom doors, Janice opens the door and sees a small girl]
Janice: You’re Mullin’s daughter, aren’t you?
Anabelle: Will you help me?
[as the girl is tapping on the window]
Janice: What are you doing?
[suddenly the little girl turns and her faces changes into an evil being]

Linda: Janice says she’s seen your daughter.
Samuel Mullins: My daughter has been dead for a long time.

Esther Mullins: It was quite for all these years. After Samuel and I lost our daughter, we prayed to see our girl again. The contact started small, but then she wanted permission to move into a doll. We soon realized it wasn’t our daughter. So we locked it away. We thought helping the girls could be our penance. But we ended up giving it just what it wanted.

Esther Mullins: She was taken from us at an early age. We prayed to see our beloved girl again. The contact started small, but then it wanted permission to move into a doll so that it could be with us forever. We said yes.

Janice: Sister, you always say that we can’t see God we can feel his presence. In this house I feel a different kind of presence, and evil one. It’s coming after me, because I know who he is.

Janice: Sister, it’s coming after me.
Sister Charlotte: Who?
Janice: An evil presence. It’s because I’m the weakest.

[seeing her daughter playing with the doll]
Esther Mullins: Annabelle.

[referring to Janice, who rises from her wheelchair]
Nancy: She can walk.

Janice: Forgive me, Sister, for I have sinned.

Linda: This doll, it’s hurting Janice! I’m getting rid of it!