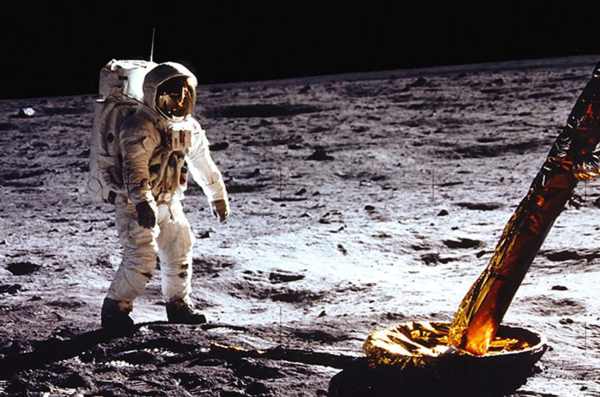 Apollo 11 (Neon and CNN Films), the March 2019 released documentary directed by Todd Douglas Miller, delivers more than information, more than education, more than illumination, even. Apollo 11 radiates from the screen with the intensity of epiphany. Following a school of filming developed during the late 50s and early 60s (direct cinema), said Miller, he and his crew committed themselves to reviving the voice of the original footage taken by NASA’s 1969 documenters. He wanted the film speak for itself, using the images, sounds and voices recorded on footage during the 8-day moonshot.

If you either watched the original live television broadcast of this trip to the moon and back, or have seen close ups of the rocket thrusters upon take off, clips of the Saturn V shedding stages, spinning them off ring by ring into space, or Neil Armstrong hopping off the lander ladder and saying, “That’s…” then you haven’t really seen this moonshot. At least, you don’t know what you’re missing. Editing and digitizing all available reels of 65mm and 70mm film and more than 13000 hours of audio recordings, most of which languished on the shelves of the National Archives since the event, Miller has produced a film that shines brightly in its integrity and, perhaps, mostly in its minimalism.

It speaks loudly and clearly. We commemorate Armstrong’s first step and words, but his following comments bear almost as much significance. He narrates each footstep with deliberation, and it’s clear he’s blazing a trail for Aldrin, still waiting in the capsule, as well as all women and men who will follow in his path. His voice conveys hesitance, carefulness. He relates what the surface feels like, the texture of the powder and its depth and whether or not it feels like it would support more steps. Each firmly planted boot allays fear and speculation that the surface might not have been firm enough to support their scientific endeavor. Every step was a giant leap into the unknown.

The Saturn V is its own muse, telling a story without words: fire and smoke, stage by stage, perfect maneuvering and timing, arriving five hours ahead of schedule. With restrained sound enhancement and an equally reverent soundtrack, the rocket gets to roar, quake and thunder. When it launches we don’t get Richard Strauss’ Also Sprach Zarathustra, or Bob Dylan telling us how to live. Instead, score writer Matt Morton reintroduces instruments of that decade: the Moog modular IIIc Synthesizer, and Mellotron keyboard. Pulling and plugging 1/4” patch chords and dialing in pitches and amplitudes on the Moog and keyboarding sampled sounds stored on the Mellotron’s rotating banks of tape, Morton shapes the sounds popularized at that time by the likes of The Beatles, Led Zeppelin and The Moody Blues. His score suits the occasion beautifully, a steel titan leaping out of the atmosphere heralded by a raga sung by an electric chorus.

The commentary faithfully follows this same restraint. Miller includes a soundbite of Walter Cronkite, but without video, and aside from one quick shot of Johnny Carson and Ed McMahon among a sea of faces, that’s where fame stops. The rest comes directly from those running the control rooms. We see who said “mission control,” or “this is Houston,” as the directors’ voices are finally given faces. The crews report the astronauts’ heart rates, periodically. At one point the capsule radio relays that Aldrin’s heart rate is missing from the telemetry, that maybe his electrodes have come loose. One of the astronauts quips, Aldrin’s dead, that’s why you don’t have reading on him. The control crew bursts into laughter. Replete with clips like this, Apollo 11 returns to life and the viewer can experience the thrill of the event as if it’s only just begun.

One of the truly wonderful accomplishments of Apollo 11 is the way is recaptures time. Nothing drags. Nothing goes too fast. Each scene progresses to the next with a perfect sense of compression. While the cameras show the panorama of spectators waiting for the launch, that same anticipation is passed on to the viewer. You are there, waiting and looking up into the bright morning sky. You wait, but just long enough and then before you’re aware of it, the launch time is just down to minutes. It feels like it’s in real time, but it can’t be, right? Engineers detect a hydrogen leak, but there’s no hesitation. Everything’s still go. Armstrong, Aldrin and Collins wait for final word. Engineers are still frantically tightening bolts to stop the leak. Suddenly, it’s only seconds away. The final 15 seconds sound off—

Go ahead, lean forward, take it all in.
It will never be enough. You’ll want more.
The rocket blasts off. It doesn’t last long enough.
You want the rocket to keep going and going and roaring.
It’s got to get to the Moon.

Upon descending to the Sea of Tranquility (mare tranquillitatis) you see footage of the fuel level in simple Futura font. It’s getting really low. One indicator says they have just so much time to land, the other says they might not have enough fuel to do it…and return to Earth. The lack of a dramatic, irreversible, auto-destruct sequence is so unprecedented, it effects even more tension and anxiety than if it were blaring through the IMAX speakers. (No worries, the sound is glorious.) Do they see how low it’s getting? How can they be so calm? Armstrong’s heart rate gets up to about 150 BPM, finally. When Armstrong and Aldrin walk the moon’s surface, plant their instruments and return to the lander just a few hours after arriving, it feels far too short. All that for two hours? And then they’re supposed to sleep? Yes, that’s what they could accomplish and only for that amount of time. Soon enough, exploding up from the lander, they ascend, perfectly vectoring to the silent Collins who’s been faithfully and precisely navigating the command module’s orbit.

Returned to Earth, the capsule plunges into the atmosphere, donning a cloak of heat rippling past the tiny port window. You endure with the astronauts’ their fiery descent.

Parachutes deploy. The capsule splashes into the ocean and Navy ships converge upon the site. Time has looped back on itself. Like deja vu, the parachuted splashdown foreshadows and mirrors events of just a few days ago: NASA and SpaceX’s successful splashdown of its unmanned Dragon capsule. Both are amazing feats of engineering, technology, and not the least, bravery, but have 50 years sped by with a grand total of just six manned moonshots, and we’re just now making plans to return to our moon and then, if that’s successful, maybe daring to set foot on Mars? Time warp? Wrinkle?

If you’re a nerd, it’s imperative you see this at least once. Let the images and sounds burn deeply into your very being. For those who may not run with this brainy crowd, treat your latent nerd and go see Apollo 11. And unless petitioning brings Apollo 11 back to IMAX, go see this at the very largest and best screen you can find. When others say drop everything and go see this, it’s the least they can recommend. If necessary, skip or leave work. Go see it. Abandon your trip; go see it. If your date doesn’t want to see it… break up… maybe? No matter what, go. The 20 bucks you spend for a reserved seat smack in the middle, just closer to the front and off to the side—whatever rocks your world—may be the best purchase you’ll have made on anything the last 10 years, let alone on a movie. Go see Apollo 11.