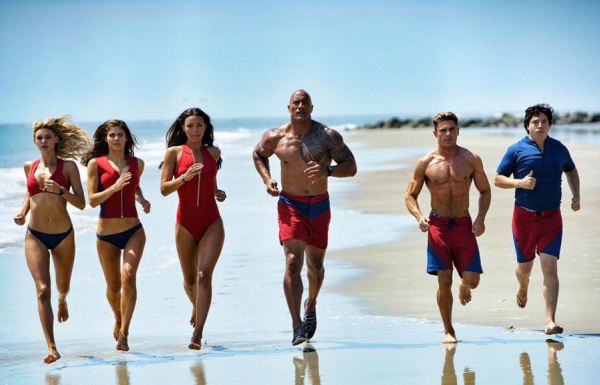 Action comedy directed by Seth Gordon, based on the television series of the same name which follows devoted lifeguard, Mitch Buchannon (Dwayne Johnson), as he butts heads with a brash new recruit, Matt Brody (Zac Efron). Together, they uncover a local criminal plot that threatens the future of the Bay.

Mitch Buchannon: Welcome to Baywatch. Our team is the elite of the elite. We’re the heart and soul of this very beach. We protect when other people don’t want to protect, and we go above and beyond.

Mitch Buchannon: Our team is the heart and soul of this very beach. Protect the bay at all costs.

[referring to the sand statue that Pete is making of Mitch]
Mitch Buchannon: Come on, Pete. Make my pants a little bigger, and don’t cover up my front bump.
Pete: You got it. Huge dick.
Mitch Buchannon: Big dick.

[as Mitch is rescuing a woman from a fire on a boat]
Woman: If you want me, you can have me. But rapido because the boat is on fire.
Mitch Buchannon: Some other time.
[he throws her overboard]

Matt Brody: Hey, I’m Matt Brody.
Summer Quinn: And not a single fuck was given.

Captain Thorpe: [to Mitch] We’re staring into the abyss here, the city council’s already cut our funding again. What the council wants and what the bay needs are two different things.

Summer Quinn: Did you just, uh, look at my boobs?
Matt Brody: I… was not my intention. I didn’t, uh, stare directly at them.
Summer Quinn: You’re looking at them right now.
Matt Brody: Now I did, because you’re talking about them.

C.J. Parker: What is it that you think we do here?
Matt Brody: Prevent people from getting sun burnt and occasionally stop them from drowning.

Victoria Leeds: Everyone on the beach is talking about you guys.
Mitch Buchannon: This is Victoria Leeds, the new owner of the Hunger Club.
Victoria Leeds: I know that the club’s probably not your scene, but you have a standing invitation.

Mitch Buchannon: Cody!
Matt Brody: What?
[Mitch does a hand signal indicating how he needs Matt to help]
Matt Brody: I don’t know what this mean!

[swimming towards a woman who is screaming for help]
Woman: Help me!
Matt Brody: Ma’am, everything’s okay.
[as he gets close to the woman she punches him]
Matt Brody: Stop it! I can’t save you if you’re being a dick!
[she punches him again]

Mitch Buchannon:This is the guy you think is a good PR opportunity for us. He’s reckless.
Captain Thorpe: With two gold medals. How many gold medals do you have? Probably zero.

Mitch Buchannon: This guy is a trainwreck.
Captain Thorpe: He’s one of the best swimmers in the world. It’s like a human fucked a jetski, which is impossible but it’d be so cool.

Matt Brody: Look, I get it. You’re big, sasquatch. I’m fast.
[Mitch suddenly grunts at Matt, Matt yelps and takes a step back in fear]
Matt Brody: Shit.
Mitch Buchannon: I didn’t touch you.
Matt Brody: You suck.
[losing balance Matt falls back into the pool behind him]

Victoria Leeds: [to Mitch] Some people are up to no good.

Mitch Buchannon: We got a dead body on our beach.
Matt Brody: That’s not our job.

Mitch Buchannon: We’re going to have to do what Baywatch does best. The truth is one of you will probably die.
Ronnie: Yeah. What? No.

Matt Brody: Am I the only who thinks this is clearly a job for the police?

[to Matt and Mitch]
Sgt. Ellerbee: Thank you, blue eyed demon. You got one job, make sure swimming happy white people don’t drown.

[referring to Victoria]
Mitch Buchannon: Drugs, murder, dead body on our beach and it all started once she took over.

Mitch Buchannon: All the bad shit happening on our beach started once she took over and my balls say we need to go over there and check it out.
Matt Brody: And my balls say…
[in a high pitched voice]
Matt Brody: “Take it easy, right here. Just chill.”
Mitch Buchannon: Why the fuck do your balls sound like three year-old girls?
[still in a high pitched voice]
Matt Brody: I don’t know, man. That’s just how they talk, but they’re wise.

[referring to CJ]
Summer Quinn: Why does she always look like she’s running slow-mo?
Ronnie: You see it too? She’s the reason I believe in God.

Sgt. Ellerbee: You turned the canals into the goddamn X-Games.
Matt Brody: Yeah, that’s because we were in lifeguard pursuit.
Sgt. Ellerbee: Oh, okay. My bad. Except there’s no fucking such thing as lifeguard pursuit! Even if you were police, what you did would still be totally illegal.
Mitch Buchannon: Okay, well, I mean it’s a good thing we’re not police then.

Mitch Buchannon: We got to go undercover.

[dressed as a woman]
Matt Brody: Check it out. I’m undercover.
Mitch Buchannon: Yeah, a little too undercover.

Matt Brody: Jason Bourne ain’t got shit on me!
[he suddenly gets hits on the head from behind]

[referring to Mitch]
Victoria Leeds: Leon, teach him some manners. Have fun, boys.

[to Mitch and Summer]
Matt Brody: All things considered things could have gone a lot worse.

[when a severed foot lands in front of Matt after an explosion]
Mitch Buchannon: Oh, a foot. That’s good luck, pick it up.

Matt Brody: Because as much as I know about laptops, I don’t know shit about computers.