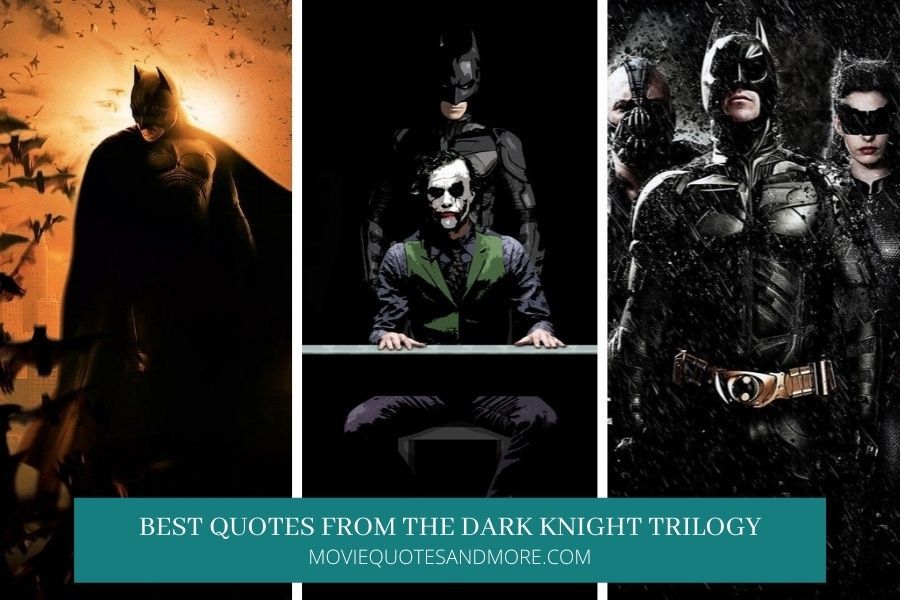 Here is our list of the best quotes from Christopher Nolan’s The Dark Knight Trilogy, which are ranked as some of the greatest superhero movies made. 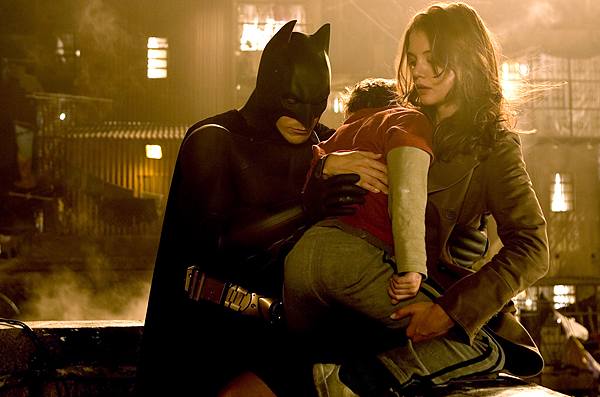 Nolan’s birth of Batman, in an origin story where we follow Bruce Wayne (Christian Bale) traveling to the Far East, to train in the martial arts by Ra’s al Ghul (Liam Neeson), a member of the mysterious League of Shadows. When Ghul reveals the League’s true purpose, the complete destruction of Gotham City, Wayne returns to Gotham intent on cleaning up the city without resorting to murder. With the help of his loyal butler, Alfred (Michael Caine), and Lucius Fox (Morgan Freeman), a tech expert at Wayne Enterprises, Batman is born.

‘Your anger gives you great power. But if you let it, it will destroy you.' – Ra's al Ghul (Batman Begins) Click To Tweet

Bruce Wayne: People need dramatic examples to shake them out of apathy and I can’t do that as Bruce Wayne. As a man, I’m flesh and blood, I can be ignored, I can be destroyed. But as a symbol, as a symbol I can be incorruptible, I can be everlasting.

Rachel Dawes: [moviequotesandmore.com] Wait! You could die. At least tell me your name.
Bruce Wayne: It’s not who I am underneath but what I do that defines me.
Rachel Dawes: Bruce?

Rachel Dawes: [to Bruce] Deep down you may still be that same great kid you used to be. But it’s not who you are underneath, it’s what you do that defines you.

Rachel Dawes: You’re not talking about justice. You’re talking about revenge.
Bruce Wayne: Sometimes they’re the same.
Rachel Dawes: No, they’re never the same, Bruce. Justice is about harmony. Revenge is about you making yourself feel better. It’s why we have an impartial system.

Carmine Falcone: [to Bruce] This is a world you’ll never understand. And you always fear what you don’t understand.

Ra’s al Ghul: What are you seeking?
Bruce Wayne: I seek the means to fight injustice. To turn fear against those who prey on the fearful.
Ra’s al Ghul: To manipulate the fears in others you must first master your own. Are you ready to begin?
Bruce Wayne: I can barely stand.
Ra’s al Ghul: Death does not wait for you to be ready! Death is not considerate or fair! And make no mistake, here you face death.

Alfred Pennyworth: Strange injuries a non-existent social life, these things beg the question as to what exactly does Bruce Wayne do with his time and his money.
Bruce Wayne: And what does someone like me do?
Alfred Pennyworth: Drive sports cars, date movie stars, buy things that are not for sale, who knows, Master Wayne, you start pretending to have fun, you might even have a little by accident.

Alfred Pennyworth: [trying to lift a burning roof beam off of Bruce] What is the point of all those push-ups if you can’t even lift a bloody log!

Jim Gordon: I never said thank you.
Bruce Wayne: And you’ll never have to. 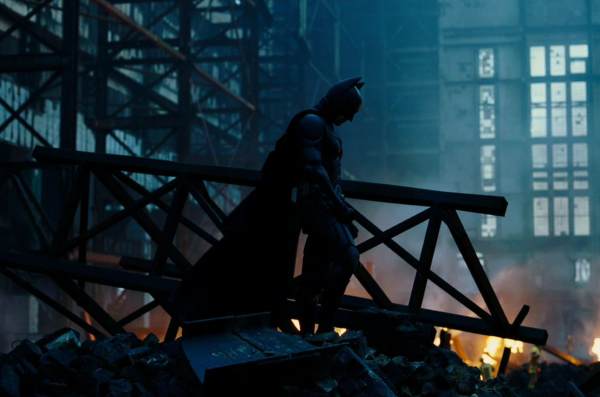 Nolan’s sequel, which is now widely considered to be one of the best sequels ever made. The story follows Batman/Bruce Wayne (Christian Bale) in his continuing war on crime. With the help of allies Lt. Jim Gordon (Gary Oldman) and DA Harvey Dent (Aaron Eckhart), Batman has been able to keep a tight lid on crime in Gotham City. But when a menace knows as the Joker (Heath Ledger) emerges, he starts to wreak havoc and chaos on the people of Gotham. Batman must accept one of the greatest psychological and physical tests of his ability to fight injustice and begins to tread a fine line between heroism and vigilantism.

‘If you're good at something, never do it for free.' - The Joker (The Dark Knight) Click To Tweet

The Joker: I believe whatever doesn’t kill you, simply makes you stranger.

Alfred Pennyworth: A long time ago, I was in Burma, my friends and I were working for the local government. They were trying to buy the loyalty of the tribal leaders by bribing them with precious stones. But their caravans were being raided in a forest north of Rangoon by a bandit. So we went looking for the stones. But in six months, we never met anyone who traded with him. One day I saw a child playing with a ruby the size of a tangerine. The bandit had been throwing them away.
Bruce Wayne: So why steal them?
Alfred Pennyworth: Because he thought it was good sport. Because some men aren’t looking for anything logical, like money. They can’t be bought, bullied, reasoned or negotiated with. Some men just want to watch the world burn.

The Joker: Want to know how I got these scars? My father was a drinker. And a fiend. And one night he goes off crazier than usual. Mommy gets the kitchen knife to defend herself. He doesn’t like that. Not one bit. So, me watching, he takes the knife to her, laughing while he does it! He turns to me, and he says, “Why so serious, son?” Comes at me with the knife, “Why so serious?” He sticks the blade in my mouth, “Let’s put a smile on that face!” And, why so serious?

Bruce Wayne: Let her go!
The Joker: [dangles Rachel out of a window] Very poor choice of words…
[then let’s Rachel drop]

Bruce Wayne: [moviequotesandmore.com] Then why do you want to kill me?
The Joker: [laughs] I don’t, I don’t want to kill you! What would I do without you? Go back to ripping off mob dealers? No, no, no! No. You, you complete me.

Bruce Wayne: You’re garbage who kills for money.
The Joker: Don’t talk like one of them. You’re not! Even if you’d like to be. To them, you’re just a freak, like me! They need you right now, but when they don’t, they’ll cast you out, like a leper! You see, their morals, their code, it’s a bad joke. Dropped at the first sign of trouble. They’re only as good as the world allows them to be. I’ll show you. When the chips are down, these, uh, these civilized people, they’ll eat each other. See, I’m not a monster. I’m just ahead of the curve.

The Joker: [to Det. Stephens] Do you want to know why I use a knife? Guns are too quick. You can’t savor all the little emotions. You see, in their last moments, people show you who they really are.

The Joker: [to Dent] You know what I’ve noticed? Nobody panics when things go “according to plan”. Even if the plan is horrifying! If, tomorrow, I tell the press that like a gang banger will get shot, or a truckload of soldiers will be blown up, nobody panics, because it’s all “part of the plan.” But when I say that one little old mayor will die, well then everyone loses their minds!

The Joker: [hands Dent a gun and points it at himself] Introduce a little anarchy. Upset the established order, and everything becomes chaos. I’m an agent of chaos. Oh, and you know the thing about chaos? It’s fair!

Bruce Wayne: [moviequotesandmore.com]What were you hoping to prove? That, deep down, everyone’s as ugly as you? You’re alone!
The Joker: Can’t rely on anyone these days, you got to do to everything yourself. Don’t we!

The Joker: [to Bruce] I took Gotham’s white knight and I brought him down to our level. It wasn’t hard. You see, madness, as you know, is like gravity. All it takes is a little push.

James Gordon Jr.: [referring to Batman] He didn’t do anything wrong.
Lt. James Gordon: Because he’s the hero Gotham deserves, but not the one it needs right now. So we’ll hunt him because he can take it. Because he’s not our hero. He’s a silent guardian, a watchful protector, a dark knight. 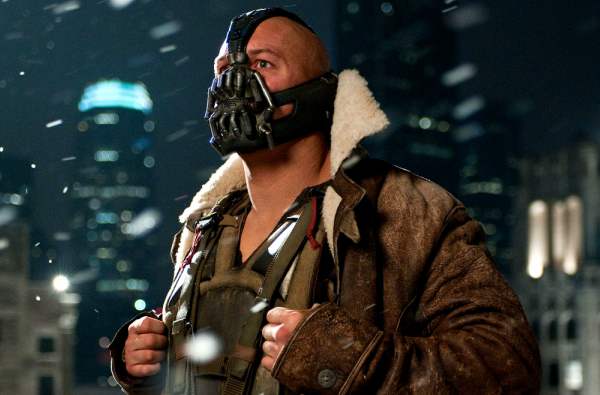 Final installment in Nolan’s trilogy, where we see Bruce Wayne living as a recluse in Wayne Manor, seen only by the trusted Alfred. Gotham appears at peace, with organized crime dropping, however, the arrival of a cunning cat burglar, Selina (Anne Hathaway), and a merciless terrorist named Bane (Tom Hardy), forces Batman out of exile and into a battle he may not be able to win.

‘There are always people you care about. You just don't realize how much until they're gone.' - Bruce Wayne (The Dark Knight Rises) Click To Tweet

Blake: [to Bruce] To be angry. In your bones. I mean, they understand. Foster parents, everybody, understands, for a while. But then they want the angry little kid to do something he knows he can’t do. To move on. So after a while they stop understanding and they send the angry kid to a boys home. I figured it out too late. You got to learn to hide the anger, and practice smiling in the mirror. It’s like putting on a mask. So you showed up this one day in a cool car, pretty girl on your arm. We were so excited. Bruce Wayne, billionaire orphan! We used to make up stories about you, man. Legends. And you know, to the other kids that’s all it was, just stories. But, right when I saw you I knew who you really were.

Bruce Wayne: There’s nothing out there for me.
Alfred Pennyworth: And that’s the problem. You hung up your cape and your cowl, but you didn’t move on. You never went to find a life. To find someone.
Bruce Wayne: Alfred. I did find someone.
Alfred Pennyworth: I know, and you lost them. But that’s all part of living, sir. But you’re not living, you’re just waiting, hoping for things to go bad again. Remember when you left Gotham? Before all this, before Batman. You were gone seven years. Seven years I waited. Hoping that you wouldn’t come back. Every year I took a holiday, I went to Florence. There’s this café, on the banks of the Arno. Every fine evening I’d sit there and order a Fernet Branca. I had this fantasy that I would look across the tables and I’d see you there, with a wife, maybe a couple of kids. You wouldn’t say anything to me, nor me to you. But we’d both know that you’d made it, that you were happy. I never wanted you to come back to Gotham. I always knew there was nothing here for you except pain and tragedy, and I wanted something more for you than that. I still do.

Bruce Wayne: [moviequotesandmore.com] You’re afraid that if I go back out there, I’ll fail.
Alfred Pennyworth: No. I’m afraid that you want to.

Alfred Pennyworth: [to Bruce] I am using the truth, Master Wayne. Maybe it’s time we all stopped trying to outsmart the truth and just let it have its day. I’m sorry!

Bane: Speak of the devil and he shall appear.

Bruce Wayne: Hope you didn’t like me for my money.
Miranda: Suffering builds character.

Bruce Wayne: Why didn’t you just kill me?
Bane: You don’t fear death, you welcome it. Your punishment must be more severe.
Bruce Wayne: You’re a torturer.
Bane: Yes. But not of your body. Of your soul.

Blind Prisoner: [moviequotesandmore.com] Fear is why you fail.
Bruce Wayne: No, I’m not afraid. I’m angry.

Bruce Wayne: If you’re working alone, wear a mask.
Blake: I’m not afraid to be seen standing up to these guys.
Bruce Wayne: The mask is not for you. It’s to protect the people you care about.

Bruce Wayne: A hero can be anyone. Even a man doing something as simple and reassuring as putting a coat around a young boy’s shoulders, to let him know the world hadn’t ended.