Home / Best Quotes / Bumblebee Best Movie Quotes – ‘You got people out there who need you.’ 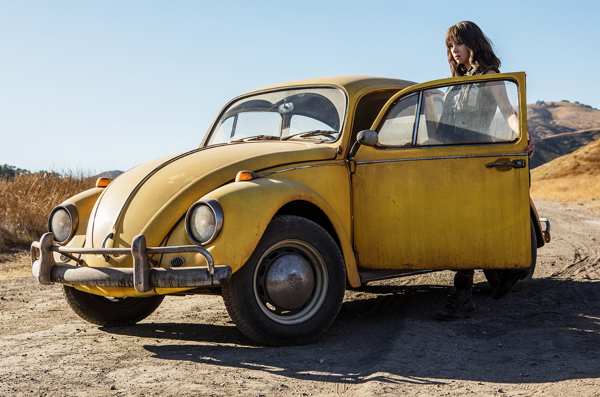 Action adventure sci-fi prequel to the Transformers movie series, directed by Travis Knight. The story takes place in 1987 where Bumblebee finds refuge in a junkyard in a small Californian beach town. A teenage girl named Charlie Watson (Hailee Steinfeld), who is trying to find her place in the world, discovers Bumblebee, battle-scarred and broken. When Charlie revives him, she quickly learns this is no ordinary, yellow Volkswagen Beetle.

[first lines; referring to the Decepticons]
Ratchet: They’ve broken through the front lines!
Arcee: I‘ve lost contact with the capital!
Wheeljack: There’s too many of them!
Brawn: Stand fast!

Optimus Prime: [to Bumblebee] I found a planet that’s well hidden. Earth. You will travel there and establish a base for us. Once we’ve gathered the others, we’ll join you. You must protect the planet. If the Decepticons find it, then our people are truly finished.

Blitzwing: Tell me where your friends are hiding.
Bumblebee: I’ll never talk.
Blitzwing: Is that right? Then let’s make it official.
[he tears out out Bumblebee’s voice box and drops him off the edge of the cliff]

[as Bumblebee starts to pat her hair to get rid of the sand in her hair]
Charlie Watson: Oh, I’m good. Yeah, I’m good, thanks.

Charlie Watson: Look, people can be terrible about things they don’t understand. If they find you, they’ll probably lock you up in a lab somewhere and cut you into tiny little pieces. It’ll be bad, trust me. The only person you can show yourself around is me, okay?
[Bumblebee nods]

Shatter: We have a common enemy, Agent Burns. There’s a war raging on our planet. If B-127 isn’t found, that war may find its way here.
Dr. Powell: Perhaps we can find a way to help one another.

Charlie Watson: [to Bumblebee] Must suck being cooped up in a VW all day, huh? Is there anyone that can help you? Do you have a family? You know, like a mom, dad, siblings? You all love each other? Or drive each other crazy and you can’t wait to get away and start a whole new life.

[after Charlie unlocks a message from Optimus]
Optimus Prime: B-127, I pray this message finds you. Our war rages on. Planet Earth… Survival…

[referring to Bumblebee]
Memo: So you have no idea where he came from?
Charlie Watson: No idea.
Memo: You thought about calling the cops?
Charlie Watson: What are they going to do, Memo? They’re just going to send him away to a lab and do weird science experiments on him.
[just then the radio starts playing “Weird Science”]
Charlie Watson: You’re getting pretty good with that radio dial, Bee.
Memo: DJ Bumble in the house! Woo-woo!

[after Bumblebee accidentally destroys Charlie’s home]
Charlie Watson: I am so screwed.

Memo: Run!
Agent Burns: No, don’t run. Do not run!
[Bumblebee picks up Charlie and runs off with her]
Agent Burns: She ran.

Memo: You know, there’s this quote that I like. “The darkest nights produce the brightest stars.”
Charlie Watson: That’s nice.
Memo: My mom got it from Weight Watchers.

[as Shatter and Dropkick torture Bumblebee they bring up Optimus’s message]
Optimus Prime: We will fight on. Regroup, rebuild, and retake our home. But we must find refuge first. You will travel to Earth. Once we’ve gathered the others, we’ll join you. You must protect the planet. If the Decepticons find it, then our people are truly finished. Stay safe, soldier. I am coming.

Sally: Ron! We have a kid in the car!
Ron: I was trying to save the other kid! What was I… It was a lose-lose.
Sally: Otis? Otis, are you alright?
Otis: That was radical.
[he then vomits]

Charlie Watson: Bee, I can’t go with you. You’ve got people out there that need you. And so do I.
[she touches his face as she cries]
Charlie Watson: I got to let you go.
[Bumblebee replies using voices on the radio]
Bumblebee: Thank you so much for giving me my voice.
Charlie Watson: Thank you for making me feel like me again. I’ll never forget you.
[she embraces him]
Charlie Watson: Goodbye, Bumblebee.

[overlooking the Golden Gate Bridge, Bumblebee scans a Chevrolet Camaro and transforms into a yellow version]
Charlie Watson: No way. Are you kidding me? Are you telling me you could’ve been a Camaro this whole time? Oh, my God!
[the engine starts and the radio starts playing Simple Minds “Don’t You Forget About Me” as Bumblebee drives away]

Optimus Prime: Old friend, you kept this planet safe. Because of you, we have a future, B-127.
[Bumblebee replies using the vioces on the radio and finally Charlie’s voice]
Bumblebee: My name is Bumblebee.


What do you think of Bumblebee quotes? Let us know what you think in the comments below as we’d love to know.