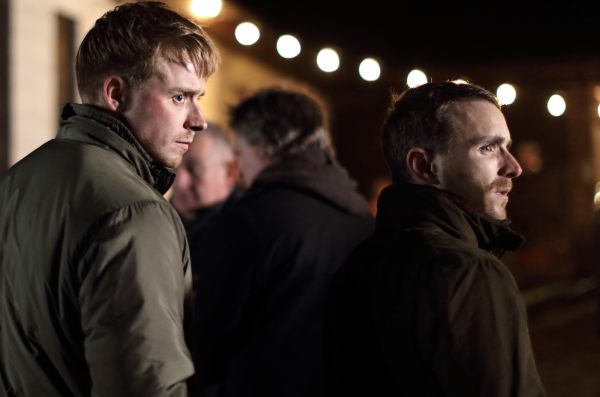 Calibre pleasantly surprised me as a true British thriller. The beginning of the film, like most, was devoted to setting up the scene, but the way that it was shot almost made it feel too normal. The characters were living average lives, and I didn’t think the film would hold my attention. Eerie landscape shots of the surrounding mountains randomly placed in between the mediocrity served as the only hint that action was coming. Then very suddenly it happened – the first major plot twist (and it took my breath away).

The film is about two friends on a hunting trip that haven’t seen each other in quite some time. They are old friends from boarding school but are now in their mid-twenties to early thirties. It’s the perfect time for a three-day trip because the main character Vaughn has a pregnant wife, whereas the other, Marcus, is still single. When the two arrive at their destination, it’s immediately apparent that everyone in the small town knows each other. This comes into play later in the film multiple times, and it truly paints the picture of Marcus and Vaughn as outsiders.

During the first day of hunting, an unspeakable accident occurs which could place both men in prison, and Marcus decides to double down rather than face the consequences. Every decision that Marcus makes from that point on is based on keeping the illusion of the pair’s innocence. Vaughn is visibly conflicted with covering their tracks and suggests multiple times to Marcus that they tell the police and come clean, but Marcus refuses. The lies that Marcus and Vaughn tell begin to spiral out of control until it is too much to hide, and ultimately a debt must be paid (however, not in the way that I expected). The second plot twist surprised me even more than the first, and really made the movie worth watching.

I enjoyed the film overall, but the shooting was a bit different than what I’m used to. It felt less like a film and more like a home movie at times, especially in the beginning of the film. The color grading was a bit different as well, and I think overall it made the film feel “cold”. Afterall, they were surrounded by snow for parts of the movie, so this was an interesting touch.

Something that I particularly liked about the film was the lack of filler. Although the beginning of the movie was a little slow, once the action started it didn’t stop. The plot was quite complex, and as I mentioned previously, surprising. There were multiple times in which a small event that seemed insignificant turned out to be important to the overall plot. This film is not your run-of-the-mill revenge-based action; it is rather a methodical and tragic story, with pretty good acting to boot.

My favorite part of the film would have to be the ending and the action leading up to it. Without giving anything away, I can say that some justice was served, but in a very cruel way that really made me think. It’s not a “happy” ending, but it isn’t necessarily a sad one either. It is however, a fitting and unique ending.