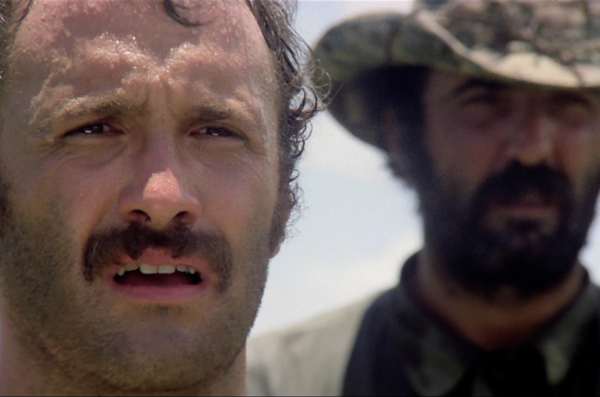 It’s tough to really talk about Cannibal Holocaust. Not because it’s a high art cinema masterpiece, more because it’s a gut wrenching crawl through the pits of depravity. Even today, 30 years after its release, it’s still a film that brings out intense disgust and revolt. A film so controversial, it still remains banned and heavily censored in numerous countries. A film so gruesomely realistic, the director was charged with obscenity and was accused of making a snuff film. Yet without Cannibal Holocaust, the world wouldn’t have found footage movies, a low budget genre of horror which presents itself as a real event, captured through a home camera which was popularised by films like The Blair Witch Project and Paranormal Activity. This film birthed a genre, and for that it’s cemented itself into film history.

Cannibal Holocaust is ripe with numerous clichés for the genre. The typical, group of film makers go missing and their footage is discovered later. Interestingly the film itself spends a large amount of time focusing on the discovery of the footage. Professor Harold Monroe (portrayed by famous porn star Robert Kerman) ventures into the depths of the amazon in search of a missing documentary team (consisting of Alan, the director (Gabriel Yates), his girlfriend Faye (Francesca Ciardi), and their two cameramen Mark (Luca Barbareschi) and Jack (Perry Pirkanen) who were shooting a film on the Yanomamö and Shamatari tribes. Upon discovering their footage, he takes it back to New York and clashes with TV executives who desire to use the footage in a guaranteed ratings success documentary. Upon viewing the footage, the true nature of the crew shows itself in one of most testing, stomaching churning films ever made.

Cannibal Holocaust mainly consists of two things. One: incredibly realistic and graphic violence and Two: surprisingly effective commentary on journalism ethics and western modernisation. Don’t get me wrong, Cannibal Holocaust is muddled in its message. In its attempts to portray the ill effects of sensationalism, the film itself devolves into it. Beneath the commentary on journalistic ethics and treatment of indigenous peoples, is a horror film and a brutally violent one at that. Yet surprisingly, it manages to get its warped message across beneath the buckets of gore and horror. The crew making the documentary are cons, staging murders and causing terror in the search for the perfect shot. In a notable scene, the group stumbles into a Yacumo village where they hoard the villages up in a hut and set it a light, filming the resulting panic and chaos.

Another notorious scene involves the male members of the crew violently rape a native girl, knowing full well she will be executed by the tribe. They discover her impaled corpse on the shore later and gleefully film the sight. The executives are aware of Alan’s habit of committing murder with his crew yet they turn a blind eye, because as one of the executives puts it, “Today people want sensationalism. The more you rape there senses the happier they are.” In a way she’s right. Cannibal Holocaust paints a horrific picture that isn’t afraid to use some of the darkest stuff ever set to tape to get its message across. Yet, there are times where it gets a bit out of hand.

There’s another thing about Cannibal Holocaust that tends to get people upset. The animal violence. Cannibal Holocaust uses genuine animal gore. Why it does this I have no idea but the nearly 5 minute scene of a turtle being bisected and disembowelled is where I started to get angry. Indeed, six animals are slaughtered on camera, the last five in a space of 30 minutes. Snakes and spiders are sliced in half, a pig is beaten and shot and in probably the worst scene of the film, a coatimundi is stabbed through the neck and dies a slow, painful death while screeching in agony. It’s rancid, exploitive and most importantly: Cruel. Yet if you can look past such a thing, the actual meat and bones (pardon the pun) of Cannibal Holocaust is surprisingly effective. Yes it’s overly gruesome, yes it’s hypocritical, but I’ll be damned if it didn’t make me think. The film’s harrowing conclusion is where things really descend into hell, as the crew are all violently massacred and eaten by the tribe. Yet still, even while their crew mate is gang raped and beheaded, the remaining crew insist on filming, even until they’re torn to shreds. The footage stops and Monroe ponders to himself, “I wonder who the real cannibals are.”

Cannibal Holocaust is disgusting. It’s a vile, wretched piece of cinema that never ceases in offending and revelling in its own degeneracy. But still, it’s a surprisingly effective and well thought out critique. On the western world, seeking to reach out its grasp into what remains of ancient tribes and to crush them. On the corrupted journalism scene, which warps the truth and commits heinous acts to get the perfect story. On the dangers of not respecting cultures alien to us. It’s a long road to hell. And Cannibal Holocaust paints it perfectly, dripping with blood, realism and most of all truth.