Disney+ live-action and animated adventure comedy directed by Akiva Schaffer. Chip ‘n Dale: Rescue Rangers (2022) follows Chip and Dale (John Mulaney and Andy Samberg), who are living a life of mediocrity in modern-day Los Angeles in a world where humans and cartoon characters live together. When a former cast mate mysteriously disappears, Chip and Dale must repair their broken friendship and take on their Rescue Rangers detective personas once again to save their friend’s life.

Chip: To many more seasons of the Rescue Rangers!

Dale: [thirty years later] I just want to remind you guys, I’ll be at FanCon this afternoon.

Interviewer: Don’t you think you’d have more fans here if Chip these events with you?
Dale: I haven’t thought about it in a little while. I should give him a call. See how life’s treating him.

Ellie Whitfield: I searched the perimeter. No clues.
Detective: Why would there be? Six missing toons in a month, and not one clue.

Chip: Life is the worst. Which is why you need good insurance.

Chip: A message on my landline. I don’t like that.
Dale: [as Chip plays the message] I know you’re still mad about Rescue Rangers getting canceled. But I just got a call from the police, and I need your help.

Chip: You look different.
Dale: Hey, it’s no secret I had the CGI surgery done.

Dale: What’s been up with you?
Chip: You know, this, that. Other vague things to fill the space of this conversation.
Dale: Cool.

Chip: We can see what we can find out, and then pass it along to the officer. But that’s all we’re going to do.
Dale: So you’re saying the Rescue Rangers are back! Yes!

Monterey Jack: My love of cheese got the best of me. I just love it so much.

Chip: Nobody wants a reboot!

Dale: We need a disguise or something! Grab the first thing you can!
Chip: [as he puts on Indiana Jones’s famous leather jacket and hat] Uh, what? 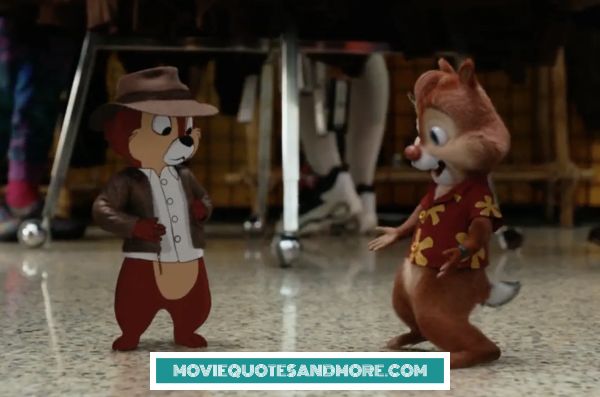 Dale: This place looks weird.
Chip: Remember that animation style, where everything looked real, but nothing looked right?

Peter Pan: You two come poking around where you don’t belong, and I can’t have that.
Dale: [to Chip] Run!

Peter Pan: I was always more of an Alvin and the Chipmunks person.
Chip: You monster!

Bob: What are you looking at?
Pumbaa: Honestly, your weird dead eyes.

Chip, Dale: It was like professional. Ha! Same time. Ha! Jinx! You owe me a non-brand specific cola. What? That was crazy! Somebody call Guinness Book! This is…
Dale: Incredible!
Chip: Blowing my mind!
Dale: Oh, we lost it!