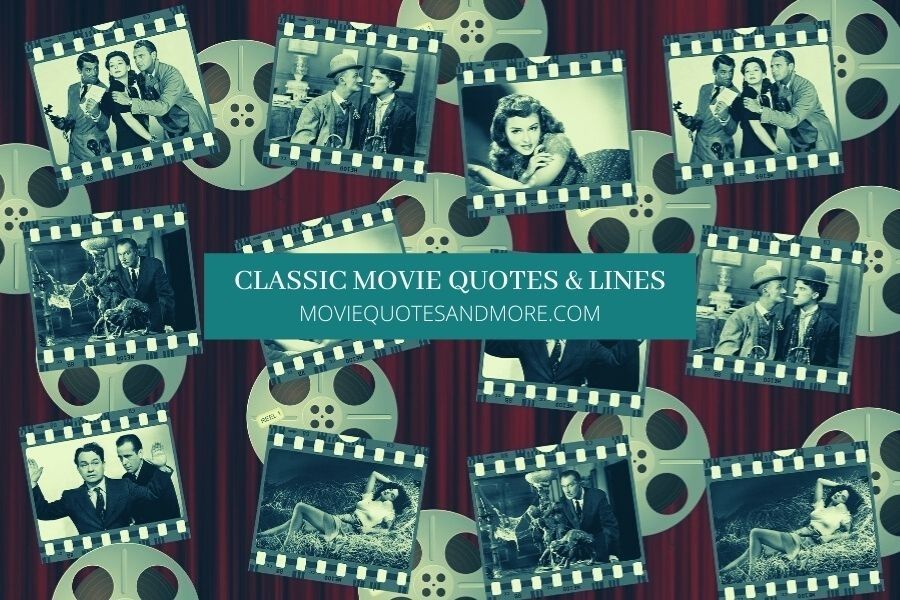 Classic movie quotes can have lots of definitions but on this site these are quotes taken from movies released pre-1970’s. Why? Well, simply because these excellent movies deserve their own category where they can be properly paid homage.

Have no fear as this list will be updated regularly with more classic quotes, so if you like what you see, keep coming back!

HAL: I am putting myself to the fullest possible use, which is all I think that any conscious entity can ever hope to do.

Juror #8: It’s always difficult to keep personal prejudice out of a thing like this. And wherever you run into it, prejudice always obscures the truth.

Charlie Allnut: A man takes a drop too much once in a while, it’s only human nature.
Rose Sayer: Nature, Mr. Allnut, is what we are put in this world to rise above.

Charlie Allnut: It’s a great thing to have a lady aboard with clean habits. It sets the man a good example. A man alone, he gets to living like a hog.

Rose Sayer: Dear Lord, We’ve come to the end of our journey, and in a little while we’ll stand before you. I pray for you to be merciful. Judge us not for our weaknesses, but for our love and open the doors of heaven for Charlie and me.

Charlie Allnut: What a time we’ve had, Rosie. What a time. We’ll never lack for stories to tell our grandchildren, will we?

Alfie: What I loved once and what I love now are two different things.

Margo Channing: Fasten your seatbelts, it’s going to be a bumpy night!

C.C. Baxter: The mirror, it’s broken.
Fran Kubelik: Yes, I know. I like it that way. Makes me look the way I feel.

Quintus Arrius: [to Judah Ben-Hur] Your eyes are full of hate, forty-one. That’s good. Hate keeps a man alive. It gives him strength.

Vivian: So you’re a private detective. I didn’t know they existed, except in books, or else they were greasy little men snooping around hotel corridors. My, you’re a mess, aren’t you?
Philip Marlowe: I’m not very tall either. Next time I’ll come on stilts wear a white tie and carry a tennis racket.
Vivian: I doubt if even that will help.

Colonel Nicholson: One day the war will be over. And I hope that the people that use this bridge in years to come will remember how it was built and who built it. Not a gang of slaves, but soldiers, British soldiers, Clipton, even in captivity.

Butch Cassidy and the Sundance Kid (1969)

Butch Cassidy: Kid, there’s something I ought to tell you. I never shot anybody before.
Sundance Kid: One hell of a time to tell me!

Rick: Louie, I think this is the beginning of a beautiful friendship.

Ilsa: I can’t fight it anymore. I ran away from you once. I can’t do it again. Oh, I don’t know what’s right any longer. You have to think for both of us. For all of us.
Rick: Alright, I will. Here’s looking at you, kid.
Ilsa: [smiles]  I wish I didn’t love you so much.

Ilsa: Play it once, Sam. For old times’ sake.

Charles Foster Kane: I don’t think there’s one word that can describe a mans life.

Captain, Road Prison 36: What we’ve got here is…failure to communicate.

President Merkin Muffley: Gentlemen, you can’t fight in here! This is the War Room!

President Merkin Muffley: I will not go down in history as the greatest mass-murderer since Adolf Hitler.
General “Buck” Turgidson: Perhaps it might be better, Mr. President, if you were more concerned with the American People than with your image in the history books.

Monco: Tell me, isn’t sheriff supposed to be courageous, loyal and, above all, honest?
Sherrif of White Rocks: Yeah, that he is.
[Monco takes badge off of the sheriff’s vest and gives it to some town folks]
Monco: Think you people need a new sheriff.

Pussy Galore: My name is Pussy Galore.
James Bond: I must be dreaming.

Blondie: You see, in this world there’s two kinds of people, my friend, those with loaded guns and those who dig. You dig.

See more The Good, the Bad and the Ugly Quotes

Blondie: Every gun makes its own tune.

Tuco: If you work for a living, why do you kill yourself working?

Benjamin: For God’s sake, Mrs. Robinson! Here we are. You got me into your house. You give me a drink. You put on music. Now you start opening up your personal life to me and tell me your husband won’t be home for hours.
Mrs. Robinson: So?
Benjamin: Mrs. Robinson, you’re trying to seduce me.
Mrs. Robinson: [laughs] Huh?
Benjamin: Aren’t you?

Tom Joad: Takes no nerve to do something, ain’t nothing else you can do.

A Jewish Barber: I’m sorry, but I don’t want to be an emperor. That’s not my business. I don’t want to rule or conquer anyone. I should like to help everyone if possible, Jew, Gentile, black man, white. We all want to help one another. Human beings are like that. We want to live by each others happiness, not by each others misery. We don’t want to hate and despise one another. In this world there is room for everyone, and the good earth is rich and can provide for everyone. The way of life can be free and beautiful, but we have lost the way. Greed has poisoned men’s souls, has barricaded the world with hate, has goose-stepped us into misery and bloodshed. We have developed speed, but we have shut ourselves in. Machinery that gives abundance has left us in want. Our knowledge has made us cynical, our cleverness, hard and unkind. We think too much and feel too little. More than machinery, we need humanity. More than cleverness, we need kindness and gentleness. Without these qualities, life will be violent and all will be lost.

Hilts: Wait a minute. You aren’t seriously suggesting that if I get through the wire, and case everything out there, and don’t get picked up, to turn myself in and get thrown back in the cooler for a couple of months so you can get the information you need?
Bartlett: Yes.

Fast Eddie: I’m the best you ever seen, Fats. I’m the best there is. And even if you beat me, I’m still the best.
Bert Gordon: Stay with this kid, he’s a loser!

Charlie Croker: You’re only supposed to blow the bloody doors off!

Charlie Croker: Hang on, lads. I’ve got a great idea.

Charlie Croker: It’s a very difficult job and the only way to get through it is we all work together as a team. And that means you do everything I say.

George Bailey: Dear Father in heaven, I’m not a praying man, but if you’re up there and you can hear me, show me the way. Show me the way.

Clarence: Strange, isn’t it? Each man’s life touches so many other lives. And when he isn’t around, he leaves an awful hole, doesn’t he?

Clarence: Remember, George, no man is a failure who has friends.

Sherif Ali: What is your name?
T.E. Lawrence: My name is for my friends. None of my friends is a murderer!

Joel Cairo: You always have a very smooth explanation…
Sam Spade: What do you want me to do, learn to stutter?

Alexander Bullock: All you need to start an asylum is an empty room and the right kind of people.

Godfrey: I want to justify your faith in me by being a very good butler and in time, perhaps, filling the void created by the death of your late lamented Pomeranian.
Irene Bullock: Oh, I’ve forgotten all about him, he had fleas, anyway. Besides, you’re different, you use big words and you’re much cuter.

Fred Gailey: Faith is believing in things when common sense tells you not to. Don’t you see? It’s not just Kris that’s on trial, it’s everything he stands for. It’s kindness, and joy, and love, and all the other intangibles.

Alicia: Well, did you hear that? I’m practically on the wagon, that’s quite a change.
Devlin: It’s a phase.
Alicia: You don’t think a woman can change?
Devlin: Sure, change is fun, for awhile.

Jill: [referring to Harmonica] Cheyenne. What’s he waiting for out there? What’s he doing?
Cheyenne: He’s whittling on a piece of wood. I got a feeling that when he stops whittling, something’s going to happen.

Terry: Hey, you want to hear my philosophy of life? Do it to him before he does it to you.

Norman Bates: A boy’s best friend is his mother.

Lisa: What’s he doing? Cleaning house?
Jeff: He’s washing and scrubbing down the bathroom walls.
Stella: Must’ve splattered a lot.
[Jeff and Lisa look at Stella with disgust]
Stella: Come on, that’s what were all thinking. He killed her in there, now he has to clean up those stains before he leaves.
Lisa: Stella, choice of words!
Stella: Nobody ever invented a polite word for a killing yet.

[after he has asked her to marry him]
Maxim de Winter: My suggestion doesn’t seem to have gone at all well. I’m sorry.
The Second Mrs. de Winter: Oh, but you don’t understand! It’s just that I, well, I’m not the person men marry.

Princess Ann: This is very unusual. I’ve never been alone with a man before, even with my dress on. With my dress off, it’s most unusual.

Alfred Kralik: You know, people seldom go to the trouble of scratching the surface of things to find the inner truth.

Bruno: My theory is that everyone is a potential murderer.

Bruno: I have the perfect weapon right here. These two hands.

Harry Lime: Nobody thinks in terms of human beings. Governments don’t. Why should we? They talk about the people and the proletariat, I talk about the suckers and the mugs, it’s the same thing. They have their five-year plans, so have I.
Martins: You used to believe in God.
Harry Lime: Oh, I still do believe in God, old man. I believe in God and Mercy and all that. But the dead are happier dead. They don’t miss much here, poor devils.

Atticus Finch: If you just learn a single trick, Scout, you’ll get along a lot better with all kinds of folks. You never really understand a person until you consider things from his point of view, until you climb inside of his skin and walk around in it.

Quinlan: I don’t speak Mexican. Let’s keep it in English, Vargas.
Vargas: That’s alright with me. I’m sure he’s just as unpleasant in any language.
Sanchez: Unpleasant? Strange. I’ve been told I have a very winning personality. The very best shoe clerk the store ever had.

Phil Davis: How can a guy that ugly have the nerve to have sisters?
Bob Wallace: Very brave parents, I guess.

Bob Wallace: We ate, and then he ate. We slept, then he slept.
Phil Davis: Yeah, then he woke up, and nobody slept for forty-eight hours.

Phil Davis: Mr. Herring, this is Miss Lenz.
Mr. Herring: How do you do?
Doris Lenz: Mutual, I’m sure.

Martha: [to George] I swear, if you existed, I’d divorce you.