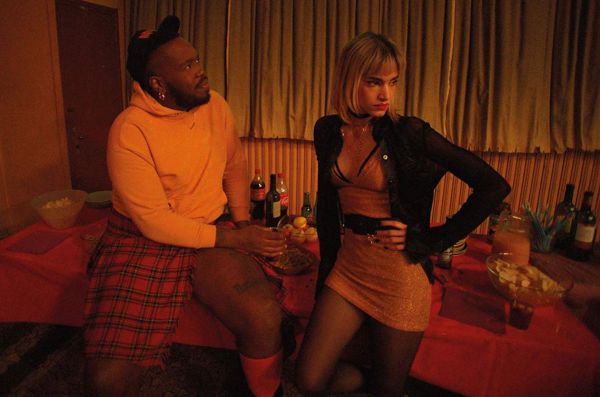 “The film you about to see was born under the sound of the stars.”

In an abandoned school, after three days of intense rehearsals a dance troupe prepares to unwind by partying all night, their manager Emmanuelle makes sangria for the party and the night progresses with a lot of dancing, gossiping and drinking.  But things starts to drastically change, the troupe becomes increasingly agitated and confused, until its deduced that the sangria has been laced with LSD and a cloud of nightmarish paranoia  descents and envelopes the dance troupe. The title of the film does not appear at the start but makes its luminous appearance before the ensuing chaos, thus confusion dominates the abandoned school while the troupe verbally and physically abuse whoever abstained from drinking sangria.

Climax begins with a bird’s eye shot of a lone female character covered with blood, writhing in the snow enveloping landscape, unsettlingly laughing. Afterwards it continues in a very innocuous way, with the troupe firstly talking about their dreams, which countries they want to visit, and what they would do to achieve their goals. While watching the troupe dancing and socializing at the party, we forget that we are watching a Gaspar Noe’s film, who in 2002 made Irreversible one of the most controversial  and violent films of that year, that prompted a lot of people to walkout.  At the party we realise that exists mutual antipathy between some members of the troupe and the way they hide their aversions is what manages to convey realism, a very relatable situation. Disharmony is a natural occurrence when more than ten people have to co-exist but this disharmony will mutate into hostility and discord when the troupe’s darker side is unleashed.

When the lurid title Climax makes its appearance at the midpoint of the narrative, Noe’s film morph from an art house drama into an overwhelming horror film that lacks either ghosts or supernatural entities, but does not lack monsters. These monsters are the likeable dance troupe who have gone through a metamorphosis becoming uncaring, violent and egocentric. The abandoned school changes to a frightening place teeming with cries of despair and suffering, each  member of the troupe descents into their own personal hell, filled with confusion, loss of identity and desperation for comfort and love.

Stanley Kubrick’s 2001: A Space Odyssey (1968) is one of Gaspar Noe’s favourite film, but instead of showing the apes evolve into humans, in Climax he shows us how humans devolve into apes, their original brutal nature. This devolution is more evident when some characters dance like they are possessed, a very disturbing image to behold, any resemblance to their former selves vanishes, while they writhe on the floor and violently fight each other. Their darker thoughts at the begin of the party starts to materialise once the sangria releases the fetters that made them humans and there is no fear or shame holding them back any longer. The hallucinogenic sangria has completely changed them, they have become something akin to feral animals in the wildness, they individually unleash a destructive darkness that has dire consequences for everyone at the party.

The motif of dance is very crucial in Climax, in the begin we see it performed by the troupe while the camera observes statically, in the second the camera performs, it becomes kinetic and follows character though various corridors and rooms thus conveying their erratic behaviour. As the film progresses the visual style become more erratic and psychedelic, mimicking the internal world of its characters. The milieu of the abandoned school is conveyed through uses of Dutch angles, irregular shots, and long takes that convey the claustrophobic and confuse nature of experiencing a bad acid trip. The long takes is the main technique that  manages to express  the overwhelming  psychological horror and it makes us experience the film in a more personal way, it  feels like we also drunk a drug-laced sangria.

Gaspar Noe with Climax manages to lead the viewers into a very frightening, nauseating and psychedelic world. The first introduction of this world is through the dance troupe, played by unknown actors except Sofia Boutella, who plays one of the lead dancers. The first half of the film has a lot of dancing and music, and there is celebratory atmosphere encompassing the abandoned school and through few dialogues we learn about the diverse group of dancers. Noe gives only some fragments of information for each character, rather than relying on expository dialogue frequently featured in lesser films. The prominence of realism in the first part is very crucial for the second to work, because the first part is about personal issues, unrequited love and failing relationships, while the second part is about seeking alleviation from these issues, that the consumption of LSD has intensified and made them inescapable.

Verdict: Climax is an art house horror film that leads you on a horrifying, hallucinogenic and nauseating path. This path is teeming with never-ending screams of despair, suffering and loneliness. Darkness engulfs everything at the end of this path, and like most horrifying films Climax has at its core the most horrifying thing imaginable: humans.