Animated superhero comedy directed by Jared Stern and by Sam Levine. DC League of Super-Pets (2022) follows Krypto (Dwayne Johnson), who is Superman’s dog and best friend, sharing the same superpowers and fighting crime in Metropolis side by side. But when Superman and the rest of the Justice League are kidnapped, Krypto must convince a rag-tag shelter pack, Ace the hound (Kevin Hart), who becomes super strong, PB the pig (Vanessa Bayer), who can grow to giant size, Merton the turtle (Natasha Lyonne), who becomes super fast, and Chip the squirrel (Diego Luna), who gains electric powers, to master their own newfound powers and help him rescue the superheroes.

Batman: As a child, my family was taken from me.
Ace: As a puppy, I was taken from my family.
Batman: So I’ve steeled myself.
Ace: My emotions, always in check.
Batman, Ace: No one ever getting past my impenetrable defenses.
Ace: [licks Batman’s face] Ah, what the heck?
Krypto: That can’t be sanitary.

Batman: Batman works alone. Except for Robin, and Alfred, Commissioner Gordon, my IT crew, whoever Morgan Freeman played.

Krypto: [as Superman is asleey, snoring] Wake up, buddy. It is walk o’clock. Maybe I should let him sleep.

Superman: [as Krypto finally manages to wake him] And I’m up. Okay, Krypto. We’ll go for a walk.

Krypto: I have an owner, and he’s Superman.

Krypto: [referring to Superman] Alright. TV night. With my bro.
Krypto: [as the doorbell rings] You’re going on a date with Lois? So disrespectful.

Superman: [uses his laser eyes to iron his shirt] Let me just iron that out. They should call me Iron Man.
Superman: [laughs] No.

Krypto: Every day, me and Supes hang out.

Ace: [referring to Superman] You literally worship the ground that dude walks on.
Krypto: Technically, he flies.

Superman: What do I have here?
Krypto: [as he sees toy Batman] Squeezy Bruce!
Ace: Squeezy what?
Superman: Fetch!

Batman: That better be a licensed toy, or I will freak out.

Superman: My dog’s the best. But he’s not the greatest with other animals. 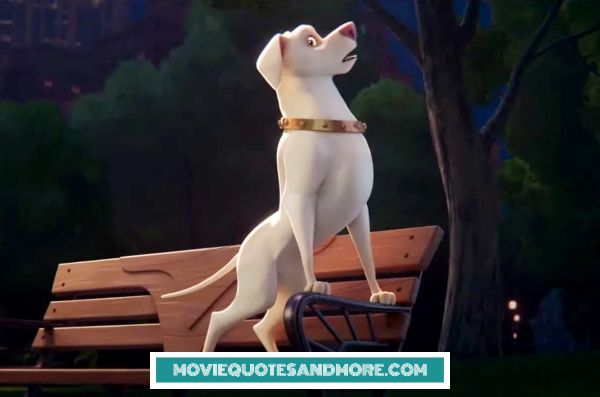 Krypto: What is new with you, fellow normal dog?
Dog: I bit the FedEx guy the other day.
Krypto: Who was he working for? General Zod? The Legion of Doom?
Dog: FedEx.
Krypto: Of course! The federation of exes. Not to be trusted.
Dog: What is taking my owner so long?

Lulu: Superman. I am Lulu, and you will kneel before me. You piece of…
Superman: [we see that Superman just hears her squeaking] Aw, aren’t you a little ray of sunshine?

Ace: All of us have super powers.

PB: [as she becomes large and breaks through a man’s bathroom] Still working out the kinks. I didn’t see anything.

Krypto: My best friend is in danger, and you have to help me!

Ace: You know what they say about dogs, don’t you?
Krypto: Never feed us chocolate.
Ace: We love unconditionally.

Ace: [to Krypto] We’re just a bunch of shelter pets. But we’re stronger than you think. We’ll help you get your dumb owner back.

Merton: Where the heck am I?

Chip: Great. I’m the only one who didn’t get any super…
[suddenly electric powers shoot out of his hands]

Krypto: When one has an abundance of power, they have a certain duty to use that power to…
Ace: [Krypto looks aside to see Ace peeing] Sorry. You were saying something?
Krypto: How much did you have to drink?
Ace: I had two toilet bowls, and a bidet. A bidet too, which is crazy. I didn’t even know that was a thing. But it’s like a dog water fountain.

Krypto: Excellent shielding. That seemed incredibly painful.
Ace: Anybody want to switch powers? Why couldn’t I have gotten a magic hammer or something?

Krypto: This just seems gross.
Ace: What do you mean gross? Smelling stuff is one of the greatest joys of being a dog. Next to licking any part of your body. And I lick myself all the time.
Krypto: Well, that explains the breath.