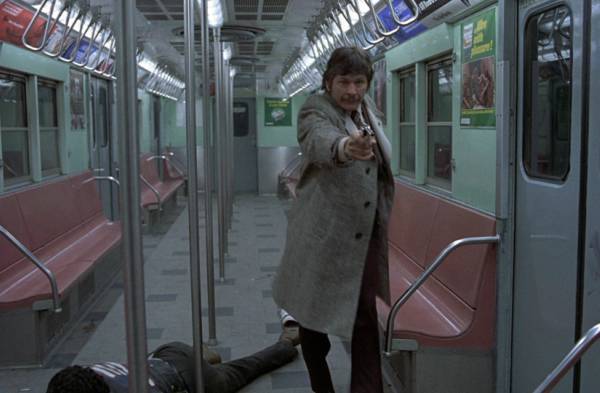 With the long-delayed, trouble-plagued remake starring Bruce Willis about to hit U.S. theatres, I thought it would be great to revisit the 1974 original and its multiple sequels. Despite changing the viewpoint laid down in Brian Garfield’s 1972 novel of the same name, this undeniably manipulative adaptation still makes for compelling viewing, as well as giving young New York residents a glimpse of what their famous city used to look like almost 45 years ago.

Charles Bronson stars as Paul Kersey, a mild-mannered N.Y. architect who has just returned from a holiday in Hawaii with his wife Joanna (Hope Lange). The two are still happy after many years of marriage, and regularly see their grown daughter Carol (Kathleen Tolan), who is married to Jack (Steven Keats).

Kersey’s life is turned upside down when three muggers (one memorably played by Jeff Goldblum, in his film debut) follow Joanna and Carol home from their local supermarket and brutally attack them. Both Paul and Jack race to the hospital where the two women have been taken, and while Jack discovers that Carol has survived, Paul is informed that Joanna has passed away from her injuries.

As Carol retreats into a psychological catatonia due to the horrific trauma she suffered, with Jack unable to deal with his wife’s state-of-mind, Paul is sent to Tucson Arizona by his boss, to work on a future project with local developer Aimes Jainchill (Stuart Margolin). It is here where the liberal-minded everyman is introduced to a particular kind of gun culture, with Aimes talking about the relationship Americans have with their weapons. The potential partner even offers his guest a gift before returning to New York.

Once back, Paul’s ideals have changed, and as the crime rate seems to get worse, with an under-manned police force unable to properly deal with it, this conscientious observer will now confront this violent problem with an equally violent solution. This newly complicated situation soon puts incredible pressure on Detective Frank Ochoa (Vincent Gardenia), who is assigned to track down this mystery vigilante.

Death Wish caused much controversy upon its release in 1974, with many criticising the film for over-simplifying a complex, largely systemic problem, as well as condoning civilians taking the law into their own hands. Watching it on VHS back in the early 1980’s as a young teenager, I initially reacted positively to its calculated, surface level charms, enthusiastically watching Bronson take on the scum of New York City single-handedly. There were plenty of revenge movies coming out at this time (including the 1982 sequel), and all seemed to follow the blueprint made popular (and profitable) by the 1974 hit.

Seeing it now, with a better perspective, it is easy to cut the film to pieces, especially the way it eventually pushes aside any socio-economic, self-reflective exploration to merely play on the viewer’s emotions, centring on a dangerously simplistic approach to urban crime. What is surprising is how the film does put forth some moral arguments and opinions in the first half, and Kersey’s generally believable transformation from law-abiding citizen to pro-gun vigilante. It is also fascinating how many of the thugs who have ruined Kersey’s life are white, yet he initially seems more suspicious of African Americans, and a comment made at an elite uptown party stating that crime is predominately committed by African Americans briefly showcases the ignorant bubble these affluent people live in.

Lastly, it is a vivid time capsule, capturing a time before New York City was cleaned up and re-presented to the thousands of tourists who flock there every year. Flavourfully lensed by Arthur J. Ornitz (Charly, The Boys in the Band, The Anderson Tapes, Serpico), this shows a grittier, meaner side of the city that never sleeps. All this mayhem is edited to a nicety by Bernard Gribble (Silver Bears, Motel Hell, White Dog), making sure there is not a wasted moment throughout the entire picture, and renowned jazz composer Herbie Hancock (A Soldier’s Story, ‘Round Midnight, Colors) accompanies these images with a perfectly realised soundtrack.

Bronson is fine as Kersey, and actually conveys his character’s self-doubt and moral dilemma quite well, even though, because of the star’s tough guy persona, we know he will be able to skilfully dish out street justice. Gardenia (Moonstruck, Little Shop of Horrors) also scores as Detective Ochoa, delivering another entertainingly energetic performance. Aside from a young Goldblum, also lookout for Olympia Dukakis (Steel Magnolias), Christopher Guest (of This Is Spinal Tap fame), Saul Rubinek (Unforgiven, and who would later co-star in Death Wish 4: The Crackdown), and John Herzfeld (who would go on to write and direct 2 Days In The Valley and 15 Minutes), all of whom turn up in bit parts.

Screenwriter Wendell Mayes (The Spirit of St. Louis, The Enemy Below, Anatomy of a Murder, Advise & Consent, Von Ryan’s Express, The Poseidon Adventure) tries to balance author Garfield’s themes with the hot topic of rising street crime in major U.S. cities, but as the story progresses, many issues are jettisoned (apparently through rewrites by director Winner and scribe Gerald Wilson), so the focus can solely stay on vigilantism and its ability to lower the crime rate and make the city safe. While the film continues to work on a visceral level, it loses the kind of substance that could have made it genuinely provocative viewing.

Michael Winner, a British film-maker not known for his subtlety, actually crafts one of his most effective features, and seems to work well with Bronson (the two teamed up previously on Chato’s Land, The Mechanic, and The Stone Killer), and noticeably revels in the material’s ability to push the audience’s buttons. Winner would helm the next two Death Wish sequels in 1982 and 1985, to far lesser effect.

Death Wish did not please its author, and would have been a very different film if the original director and star, Sidney Lumet (12 Angry Men, Serpico, Dog Day Afternoon) and Jack Lemmon (The Apartment, The China Syndrome), had have stayed on. However, what we do have is an assured crime thriller that throws up a lot of moral questions, and while many of these questions are eventually put on the back burner in favour of proposing one basic answer to huge issues that still affect society today, the film continues to provide powerful entertainment.