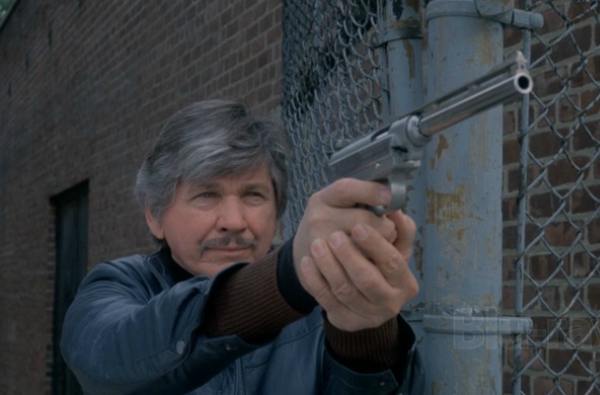 Death Wish 3 is pure, uncut madness caught on film. It has no exposition whatsoever: Paul Kersey’s (previously unmentioned) friend dies, and 90 minutes later everybody who has ever looked at him funny is dead. That’s literally the movie, and it’s quite a joyous affair. It’s clearly the most entertaining of the Death Wish – movies, if only because the body count is just insane. 76 people die in this movie, but it feels like thousands.

This has an unpleasant side effect though: for the character of Paul Kersey, this is the final nail in the coffin. The sweet father who became physically ill after killing his first thug is gone forever. Instead we get a way more generic and somewhat unrealistic protagonist. They try to use Charles Bronson as if he were Arnold Schwarzenegger in Commando, but he’s hardly a physical threat that everybody should be afraid of. Kersey mowing down scum one at a time in dark alleys made sense. Kersey leisurely strolling into an open space with a machine gun and murdering entire street gangs without getting hit? That’s not nearly as easy to swallow.

The main problem this movie has is that Kersey just likes killing people way too much here. In fact, there are several instances where he himself sets up a crime, only as an excuse to kill more people. The most blatant example is the scene where he buys a cheap car and just parks it in the neighbourhood waiting for someone to steal it. Another guy dies because… he stole Kersey’s camera! How is that an eye for an eye? Do the writers know Kersey is not supposed to be a villain?

This sequel falls mostly in the so-bad-it’s-good category, because it’s filled with weirdly comical moments. These are mostly provided by the side characters. Martin Balsam shows up as a plot device: he just happens to have two functional loaded machine guns laying around in his closet. Why? Because he’s a World War veteran. That’s all the explanation I need, movie! Then again, it’s set in a universe where you can buy a rocket launcher via mail order, so I guess it’s not that preposterous. I also love Rodriguez, a guy that joins the big battle armed with nothing but a zip gun. How this guy lasts more than three seconds, I’ll never know. I’m equally intrigued by how they kill of Kersey’s new girlfriend after he’s already taking revenge for his friend. It has absolutely no bearing on the plot, but it’s Death Wish. If Kersey cares about you, you’re toast!

If you’re going to dumb down your action franchise, you might as well go big. This is a lesson Death Wish 3 understands perfectly. There’s no character development, but on the other hand there’s also no filler. Despite all its problems (maybe because of?), Death Wish 3 is an infinitely rewatchable movie. While the two sequels that followed it were completely redundant, this movie at least provides us with some great action set pieces.