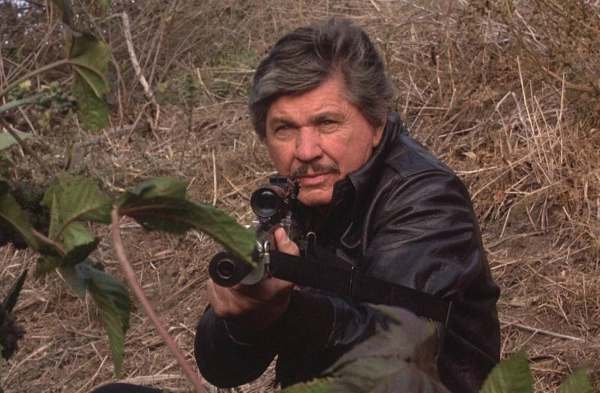 After killing what seemed like half the population of New York in Death Wish 3, vigilante extraordinaire Paul Kersey travels back to L.A. for Death Wish 4: The Crackdown, to take on the entire drug industry and save the city from evil.

Kersey (Bronson) has set up a successful architecture business, and is currently seeing dedicated reporter Karen Sheldon (Kay Lenz), a relationship which is now becoming serious. Karen’s teenage daughter Erica (Dana Barron) is a talented artist, and Paul is always there to provide constructive advice.

Erica begins acting strange, which Paul attributes to her new boyfriend, who he suspects is supplying her with illegal drugs, and when his dealer hands Erica a potent new drug called crack, the teen tragically overdoses. Enraged by Erica’s senseless death, Paul goes after the dealer, and this attracts the attention of millionaire Nathan White (John P. Ryan), as well as detectives Reiner (George Dickerson) and Nozaki (Soon-Tek Oh). White also wants to take down both drug cartels, one headed by Ed Zacharias (Perry Lopez), the other by the Romero brothers (Mike Moroff and Dan Ferro), and offers to fund Kersey’s exploits if he agrees to do what he does best; kill criminals.

With the police hot on his trail, Kersey eliminates these drug dealers one by one, by two, by four, and so on.

Death Wish 4: The Crackdown is completely undistinguished, lacking the excessive nastiness of Part Two, and the utter ludicrousness of Part Three. In fact, it could easily disappear amongst the hundreds of imitations the series itself has inspired, if it weren’t for the iconic star headlining it. The action scenes are barely functional, executed in a tiresome, lifeless manner.

Taking over the director’s reigns this time is seasoned director J. Lee Thompson, who helmed entertaining fare such as Ice Cold in Alex (1958), Tiger Bay (1959), The Guns of Navarone (1961), and Cape Fear (1962). He, like previous director Michael Winner, worked on a number of projects with Bronson (9 in total), including St. Ives (1976), 10 to Midnight (1983), Murphy’s Law (1986), and Kinjite: The Forbidden Subjects (1989), which was Thompson’s final film. There is no spark here however, and both director and star seem to be aware that the well has pretty much run dry.

Bronson is professional as always, but a certain air of disinterest seems to creep into his performance, and one can’t blame him. Lenz (Breezy, House), a likeable actress who deserved to be better known by audiences, is introduced early on, but then unfortunately disappears for much of the picture, so she doesn’t get the chance to make much of an impression. Ryan (Shamus, It’s Alive 1 and 2, Runaway Train) fares better as White, but his casting allows the viewer to easily see where the plot is going.

For those wanting to spot actors early in their careers, then look for Danny Trejo (Desperado, Con Air, Machete) as a drug henchman, and Mitch Pileggi (The X Files, Shocker) as a lab foreman.

Apart from Kersey himself, there is nothing, either on a thematic or familial level, connecting this to the original 1974 hit. Even the character Bronson plays is no longer recognisable, twisted, distorted, and destroyed via three sequels whose tone and focus changed considerably, regrettably burying the serious source material which lead to the series’ inception in the first place.