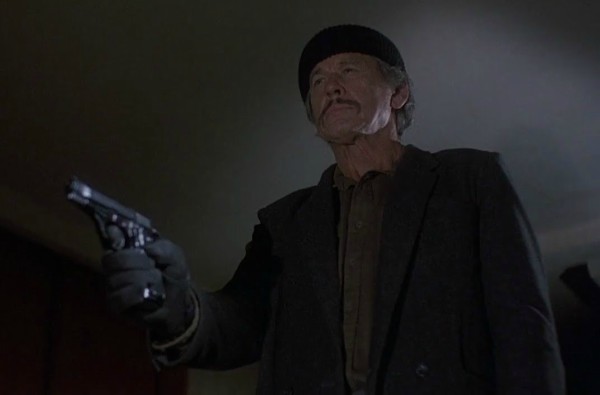 After bringing his brand of justice to the streets of New York in 1974, Charles Bronson returned eight years later for the inevitable but strangely belated sequel, and while the action icon may be playing the same character, this ultra-violent follow-up is a very different beast to the original, which struck a chord with audiences across the U.S.

Kersey (Bronson), now using an alias, has moved to Los Angeles, and has found romance with well-respected radio journalist Geri Nichols (Jill Ireland, Bronson’s real-life wife). Kersey’s daughter Carol (now played by Robin Sherwood, replacing Kathleen Tolan) is still under medical supervision, and has only recently started speaking again, if only a few words. The two organise a day trip for Carol, who is deemed well enough now to step outside the mental institution she has been kept in for a number of years.

During this excursion, Kersey runs afoul of a group of five street punks, Nirvana (Thomas F. Duffy), Stomper (Kevyn Major Howard), Cutter (Laurence Fishburne), Jiver (Stuart K. Robinson) and Punkcut (E. Lamont Johnson), who steal his money, and more importantly, his wallet. After roughing up one of the gang members, the group decide to exact revenge on their victim, so use Kersey’s driver’s licence to locate his home address. Breaking in, they discover that the only one home is the maid Rosario (Silvana Gallardo), and proceed to brutally rape her.

Kersey and Carol arrive home as this happening, and while the former is knocked unconscious, Carol is kidnapped, and eventually has to endure the same horrors (only worse) she did several years before. When Kersey comes to, he soon discovers that Rosario and Carol have been murdered, and determined to be the one to dispense much-deserved punishment on these thugs, entrenches himself in the area where they will most likely frequent. As the corpses start to pile up, these vigilante antics attract the attention of New York Detective Frank Ochoa (Vincent Gardenia), who travels to L.A. to see what Kersey is up to.

While the original Death Wish at least introduced some varying points and arguments before siding with the main character’s vigilante behaviour, the sequel absolutely relishes Kersey’s murderous intent. Produced this time by Menahem Golan and Yoram Globus, founders of The Cannon Group, the tone aimed for now is one of sheer exploitation and sleaze. Screenwriter David Engelbach (America 3000) drops any pretence of using the set-up to examine some of society’s myriad problems, instead moulding everything down to a mere succession of brutal set-pieces, with Kersey the one connecting thread. The violence is a lot more graphic, which was typical of the era, but what really sours proceedings is the level of attention afforded the numerous rape scenes, which are shown in excruciating, lip-smacking detail.

There is nothing wrong with R-rated, B-grade genre fare, but it is hard to dismiss something as mere junk food entertainment when scenes of sexual violence against women are presented in such offensively titillating fashion, used to do nothing more than easily push viewers’ emotional buttons. Many prints were excised of these explicit moments (totalling almost six minutes), but were re-instated for the film’s recent Blu-Ray release. While the uncensored version should be available for fans of the film, this distressing imagery almost cancels out the low-brow fun that one can have with the rest of the picture.

Bronson goes through the motions here, devoid of the relatable uncertainty his character had in the first film. Looking like a sailor on shore leave, Kersey is a standard killing machine, wiping the streets clean of human garbage, who are presented as convenient stereotypes. Ireland (who appeared in an incredible sixteen films with her husband, from 1968 to 1987) is okay as Geri, and probably escaped any on-screen harm solely due to the fact that she was Bronson’s wife. Gardenia has fun with the limited time allotted him.

Like the original, some familiar faces turn up in smaller roles. This time it is Laurence Fishburne (The Matrix, Last Flag Flying) as one of the rapists, John Carpenter regular Charles Cyphers (Assault on Precinct 13, Halloween, The Fog, Escape From New York) as an orderly, and Kevyn Major Howard, who would play a thug again a year later in the Dirty Harry entry Sudden Impact. There is even a humorous joke where Bronson drives past a cinema screening two comedies starring rival action star Clint Eastwood.

On hand are not one but two talented cinematographers (multiple DoP’s normally indicate a troubled shoot), Thomas Del Ruth (The Breakfast Club, Stand By Me, The West Wing) and Richard H. Kline (Hang ‘Em High, The Mechanic, The Fury, Body Heat), so it’s odd that Death Wish II has such a slipshod feel about it. Even the editing isn’t as tight this time around, and the score by Led Zeppelin member Jimmy Page is also less effective, indicating that this may have been a rushed production.

If one lowers expectations, there is mindless, exploitative fun to be had with Death Wish II, as we watch Bronson take care of crime his own, bloody way. But any serious exploration of its provocative subject matter is long gone, which makes its protracted scenes of sexual violence all the more repellent.