Psychological thriller directed by Adrian Lyne. Deep Water (2022) centers on married couple Vic and Melinda Van Allen (Ben Affleck and Ana de Armas) who avoid divorce in a loveless marriage by allowing each to take lovers. However, their mind games with each other take a twisted turn when people around them start turning up dead.

Mary Washington: [as they watch Melinda dancing with Joel] Is that Joel with Melinda?
Vic: Yeah.
Mary Washington: They’ve really hit it off in a short amount of time, haven’t they?
Vic: I guess they have.

Mary Washington: Look, you adore her and everyone knows it.
Vic: I love her.
Mary Washington: She loves you too. You’re good, Vic. We just don’t want you out here looking foolish.
Vic: I’ll stay off the dance floor.

Joel Dash: I wanted to say, you’re a brick for how nice you are about me seeing your wife.
Vic: Seeing my wife.
Joel Dash: It’s good to have a friend. I mean, it’s all innocent, of course, you know. But some guys, some husbands, they get a little…
Vic: Yeah, jealous.

Vic: He started seeing a lot of my wife.
Joel Dash: You suggesting…?
Vic: They were friends.
Joel Dash: You want me to believe you did something to Martin McRae?
Vic: I killed him.
Joel Dash: Does Melinda know?
Vic: Oh, God. No. She’d be horrified.

Joel Dash: [referring to Martin McRae] Considering he was a friend of yours, I don’t think it’s very funny to joke about…
Vic: He wasn’t a friend of mine.
Joel Dash: A friend of your wife’s.
Vic: Well, that’s obviously something different, isn’t it?

Joel Dash: Are you like threatening me?
Vic: Do you feel threatened?
Joel Dash: I don’t believe you.
Vic: Then don’t.

Melinda: Is that what interests you in a woman? Her intelligence?
Vic: That’s one of the things, yes.
Melinda: Is that why you picked me? For my brains?
Vic: You’re very smart, Melinda.
Melinda: Yeah. Not in a way you respect. Joel might be dumb, but he makes me enjoy who I am. And that turns me on.

Jonas Fernandez: [referring to Joel] I don’t think I would kill somebody for sleeping with my wife.
Vic: Who says they slept together?
Jonas Fernandez: Vic, I don’t mean to be the bearer of bad news, but it’s pretty obvious. Isn’t that why you threatened him?
Vic: I didn’t threaten anybody.

Grant: [to Vic] Look, coming from somebody who loves and respects you, you got to reign Melinda in, man. Like this isn’t the first time. The fact she’s comfortable like flaunting all these relationships around in front of us, is f***ed up. Yes, she’s a f***ed up person.

Vic: Melinda kind of has the palate of a twelve year-old. Our first date, I took her to the best restaurant in the city, and she ordered mac and cheese.
Melinda: Yeah. It’s like he was ashamed to be with me.
Vic: No, I just realized you were ordering off the children’s menu to save room for alcohol.

Melinda: Sometimes I think he’s not normal. Because normal people can let go.
Vic: Do you wish that I were normal, Melinda?
Melinda: My God, all the time.
Vic: Because if I were normal, I don’t think Joel would be over here having dinner with us.
Melinda: You don’t have to be rude.
Vic: I’m not being rude. I made lobster bisque. 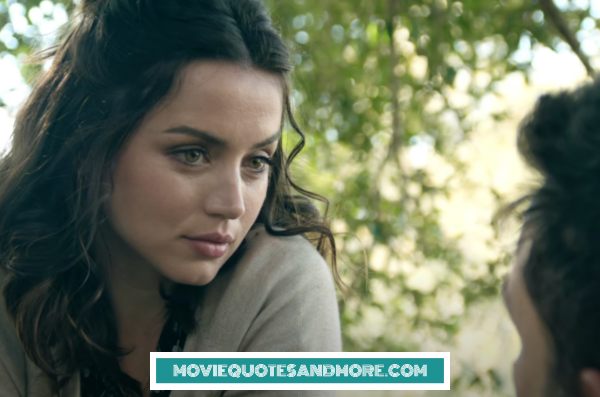 Trixie: Why is mom so different around other people?
Vic: You think mom’s different?
Trixie: Yeah. Don’t you?
Vic: I think that’s just who she is.
Trixie: But how can it be who she is if she’s different?
Vic: Because people are strange, and grown-ups are complex.

Melinda: [referring to Vic] He built the chip for drones that help them find the people they blow up. Right?
Don Wilson: Wow. Drone warfare. That’s kind of a moral gray area, isn’t it?
Vic: Well, not if you’re just making the chip.
Kelly Wilson: Don, let’s not get into politics.
Don Wilson: Yeah, but the chip is used to kill people. Sometimes used to kill innocent people.
Vic: Or it can be used to find starving children, and drop food off to them.
Don Wilson: Yeah. But they don’t.
Vic: No. They don’t.
Grant: Look, but the moral of the story is, Vic is a genius, and he’s rich as f***.

Vic: F***, Melinda. You’re going to get us killed.
Melinda: Well, if you think Kelly Wilson is a better f*** than me, then I don’t mind killing us both.
Vic: I didn’t say that.
Melinda: But you thought it.

Vic: Sweetie, I have to tell you something.
Melinda: Ooh-ooh. What did I do?
Vic: They found Martin McRae. He’s dead. I’m sorry.
Melinda: Are you?

Grant: I’m glad the police caught that guy. Yeah. You know, put to rest all the talk, you know.
Vic: What talk? I didn’t hear any talk.
Grant: Oh, there’s definitely been talk.

Vic: You want to tell me why you didn’t come home last night?
Melinda: Not really.

Vic: You want to tell me what the f*** you’re doing?
Melinda: Finally some emotion.

Melinda: What do you want to know? Where I was? What I did? Because I’ll tell you everything.
Vic: I’m not interested in the details, Melinda.
Melinda: Well, now you’re really full of s**t.

Vic: We have a child. We have a family.
Melinda: That was your choice.
Vic: I want you to stop seeing him.
Melinda: Or what? What? You going to divorce me?
Vic: No. Because you’re going to listen to me.
Melinda: Look how assertive you’ve become.

Vic: [referring to Charlie] I do love you! Are you in love with him?
Melinda: If you were married to anyone else, you’d be so f***ing bored, you’d kill yourself.

Chief Nichols: [referring to Charlie] We’re just trying to figure out what happened.
Melinda: Vic killed him.
Jonas Fernandez: What?
Melinda: You killed him. Didn’t you?

Jonas Fernandez: [to Vic, referring to Charlie’s death] Don’t let this get you down, alright?
Melinda: Get him down? He should be down. He should be at the bottom of that f***ing pool.

Vic: So, what now? You want a divorce?
Melinda: I can’t stand that you think you’re this much smarter than me.
Vic: I don’t think that.

Vic: If you think I killed Charlie, aren’t you frightened of me?
Melinda: No.
Vic: Why not?
Melinda: Because I’m the thing you killed for.

Vic: Do you know anything about snails, Don?
Don Wilson: I can’t say I do.
Vic: A snail will climb a twelve foot wall to find its mate. It’s the smell.

Vic: [after Ricigliani’s told them he’s a psychotherapist] I’m curious, do you think my wife has schizophrenic tendencies?
Melinda: What?
Vic: Well, he’s a professional. I thought I’d ask. It’s possible he may have some insight as to…
Melinda: You’re such an a**hole.
David Ricigliani: No, I don’t think so at all.
Melinda: Do you think my husband might be psychopathic for asking you that? Or maybe just an a**hole?
David Ricigliani: How about couples therapy?

Vic: [referring to Don hiring Ricigliani to investigate him] Where did you find this guy?
Don Wilson: You can’t just walk into my house and accuse me, in front of my family.
Vic: Apparently, anybody can accuse anyone of anything. Unlike you, however, Don, I have proof.

Trixie: [referring to killing Charlie] Why won’t you tell me how you did it? Everyone keeps asking me how you did it.
Vic: Sweetheart, if I did kill someone, do you know what they would do to me? They would put me in prison for the rest of my life. Do you understand?
Trixie: I still think you drowned him. You’re just telling me you didn’t.
Vic: Well, let’s keep that between us.

Melinda: He doesn’t want to control me like a normal man.
Vic: No, I’m not normal.
Tony Cameron: As somebody who dated her, Vic, I really sympathize with you. She’s a very difficult person to control.
Melinda: Oh, yeah. Right?
Tony Cameron: But that’s also what makes her special.
Melinda: You know that.

Vic: [after he kills Tony] How’s Tony?
Melinda: I don’t know.
Vic: I like him. He’s actually got brains.

Melinda: Why are you the only man who wants to stay with me?
Vic: I don’t know.
Melinda: But you do.
Vic: I do.

Melinda: You’re not bored?
Vic: No. Are you?
Melinda: [shakes her head] But I’m sad.

Don Wilson: [to Vic, after he sees Tony’s body in the river] F*** you, you f***ing psycho! You’re going to jail!
[then as Vic chases him on his bike, he crashes his car and dies]

Vic: What?
Melinda: Nothing. I saw Tony.
[we then see she burned Tony’s ID and wallet]