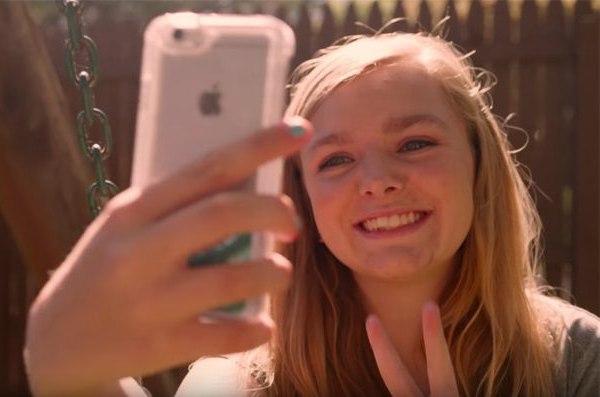 Middle school is terrifying. A cesspool of inflamed zits, self-doubt, and unimaginable loneliness, it’s hard to imagine a more uncomfortable time in life for a young girl with crippling social anxiety. Such is the case for Kayla, played beautifully by Elsie Fisher in Bo Burnham’s directorial debut indie comedy, Eighth Grade. Kayla tries her best to navigate through that awkward period of life on the cusp of childhood and young adulthood. It seems like just yesterday she was playing with Barbie Dolls, and now she’s reaching for bananas from the fruit bowl to practice oral sex with.

Stuck in that drastic in-between place of innocence and curiosity, Kayla is desperate to find some type of grounding to balance her confusion. A place where she can fit in. Where things can finally start making sense. Although our protagonist is in a state of being lost, she tries to make sense of it all through her YouTube Channel, titled “Kayla’s Korner”. In her videos she awkwardly attempts to give advice to her viewers, (which heartbreakingly have one or two views at most.) But it seems as though she’s giving advice to herself more-so than anyone else.

Her videos range from topics such as “How To Be Yourself” and “How To Be More Confident”, despite the fact that Kayla seems to be the most insecure person at school. Through this digital platform, it gives Kayla a voice in a world that seems to believe she doesn’t have one. After all, she has been voted “most quiet” at the school.

Everything about Burnham’s Eighth Grade is beautifully flawed- which makes for a flawless movie. From Kayla’s acne scars to her slouched posture to her hilarious attempts of casual dialogue with the cool kids at school, Elsie Fisher’s character radiates with authenticity and imperfections that make her nearly impossible not to fall in love with.

Every small detail presented in this indie flick managed to resonate with the girl I was in the eighth grade. If Burnham’s movie could’ve been around when I was in middle school, I know it would’ve helped me feel way more comfortable in my own skin. Knowing that not every girl has to be a perfect velvety skinned beauty queen with a sea of supportive best friends and a godlike confidence in order to be worth something, is crucial for a young girl. If I had this movie around as an eighth grader, I would’ve had more assurance that I am not alone in my nervousness when it comes to doing casual activities with others such as chatting at a mall food court or going to a pool party filled with classmates.

Another factor of striking importance and progression in Eighth Grade is the fact that Kayla is a girl. When I was thirteen I had been exposed to beautiful coming of age stories of flawed characters with extreme nervousness such as Charlie in The Perks of Being a Wallflower, and Holden Caulfield in The Catcher in the Rye. Although these books truly made me see the beauty in a flawed protagonist to help me understand that imperfections and insecurities make you a human being, I would’ve wanted at least one of these coming of age complex protagonists to be female.

In the aforementioned coming of age stories, the women in these books serve more so as ideas and muses to the men, rather than fully formed and flawed individuals. Kayla serves no one. She stands alone, quite literally throughout the film. We as audiences are forced to see the world through this young girl’s point of view, which is so vital in a plethora of Hollywood films that cater nearly every time to the male gaze.

The camera work finds a way in Eighth Grade to get so personal with Kayla, that it’s impossible not to put yourself in this thirteen-year-old girl’s shoes, and see the universe through her perspective. This is an incredibly powerful thing for audience members of all genders and ages to experience. If a thirty-year-old man can see this movie and be moved by the world seen through a young girl’s eyes, then Burnham’s film is doing its job by allowing women to have a voice and a story and an abundance of flaws, in a society that doesn’t seem to want them to have any.

On a personal note, I found myself crying and laughing throughout this entire film. I nearly had to leave the theater at one point because my overly dramatic sobs were beginning to cause audience members to turn heads, but I couldn’t allow myself to take my eyes off the screen. I felt if I’d left the theater for thirty seconds at most, I’d still miss out on brilliant artwork because not a single second of this film failed to move me and tug on my heartstrings while breaking it at the same time.