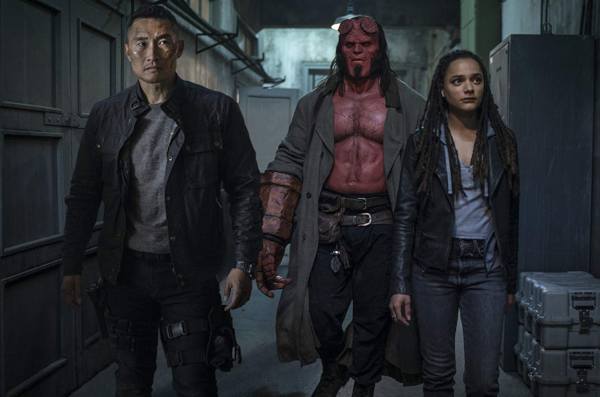 I’ll try to avoid spoilers, but trust me, you won’t care, because when you watch it, you still won’t believe what’s happening on screen.

I am writing this review the day after the viewing, in order for my brain to process the film, and by God, this movie was hard to fathom, but luckily I wrote notes whilst watching.

According to Google, the definition of a Plot is, “The main events of a play, novel, film, or similar work, devised and presented by the writer as an interrelated sequence.” The word ‘interrelated’ doesn’t relate to Neil Marshall’s reboot of Hellboy. I think this is what happened. Screenwriter and Hellboy comic book writer, Andrew Cosby, barely wrote a beginning and an ending, and then put ideas on post-it notes, and stuck them on the wall. But with 666 miss calls on his phone, he soon realised it was March 2019. He then shouted, “Ahhhh fuckk, the film comes out next month!” He rings up Neil, “Umm, Hi, Neil, you alright mate, listen, ummm, I have a script, but it’s on my wall, and I don’t have a printer, coz you know, dark horse comics can’t afford one. Sooo, ummmm…yeah, Hellboy, wooooo!!” And Neil replies, “Fuck you, Andrew, now I’m gonna have to make it up as I go along and make the film look like it was made by a committee, thanks for ruining my reputation.” Andrew replies, “That’s alright, Neil, and remember to make it very gory and make the swearing sound so exaggerative, bye!! Have fun geezer”. Neil ends with, “You soggy c*nt”.

Oh, my bad, I was so distracted by writing my own plot, that I forgot to write about the film’s plot. Bad things from the past return to destroy the world. People die, blood and guts are spilt, English people saying things with the worse English accents, movie dialogue clichés are thrown around, such as “this is your destiny”, and “Hey! I’m on your side! Ooops, sorry!” It has EastEnders actors (literally) who make the film look like a soap at times. Oh and also somehow, spoiler alert King Arthur is involved. That is the ‘plot’.

It’s a mess. It’s a real fucking mess. If Del Toro’s Hellboy was food, it would be a juicy succulent burger, with fresh fries and a selection of decent sauces. You want to finish that burger and you will. Hellboy (2019) is burnt toast with no plate or butter, crumbling on the table. However, there are some people who like to eat burnt toast, or at most, they tolerate it. That’s the best way to sum up this ‘reboot’. Now personally, I tolerated this film in the best way. I watched it with a friend, and we were both prepared to roast it, and that made the viewing experience so much fun. Because I can’t imagine trying to watch this on your own. The gory moments can be satisfying, and some of the makeup is good, one character in particular reflects the effort made in Del Torres’s films. David Harbour as the demon is trying his best, but he’s got nothing to work with, which shadows his true potential for the role.

The dialogue is very bad, it’s so cringey to the point it’s just laugh out loud hilarious. The editing is utter crap, people with epilepsy will be affected in the finale due to its Taken style choppiness. The randomness of film really doesn’t work either. There is a moment where they shove an off brand packet of Jaffa Cakes at the camera (not a lie and not a spoiler). What the fuck Neil? Or what the fuck Lionsgate? But okay. As for the soundtrack, it was blatant for what they were trying to go for, using well known Heavy Metal songs in the background. Yes a good idea trying to make a Hellboy movie look like an Iron Maiden album cover, but the execution is so poor, this some of the worst sound mixing I’ve ever heard, its shit. I have a feeling the filmmakers didn’t watch the Del Toro films because they didn’t want to, they said, “No! We’re gonna do this our way! Andrew, you get started on the script and call Neil when you’re done, you’ve got 2 years starting now.” Andrew went to the pub, listening Metallica for a 23 months, and then went home to write the script.

What were they thinking! I have never read a single Hellboy comic in my life, and yet, I know this is not Hellboy.

I enjoyed Hellboy (2019), but for the wrong reasons. This is a bad film, with some weird decisions. But it can be enjoyably bad when you’re with friends. It is much more fun and easy to watch than Suicide Squad, but that’s not saying much. Again there are satisfying moments, it’s just a shame it’s shrouded by other pointless corporate decisions. I could write loads more about this film, like the wooden acting that would make Pinocchio would throw himself into the fire for. But my fingers are getting tired and thinking about the film this much will give me brain hemorrhage. But, if you are going to watch this film, can you please answer this question for me… What accent is the Mutated Puma using, Liverpudlian or Scottish?

Don’t pay money to watch it.