Home / Best Quotes / If Beale Street Could Talk Best Quotes – ‘I’ll tell you a story if I may.’ 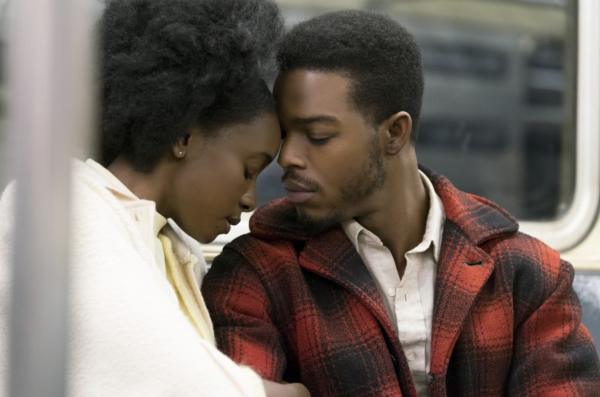 Drama written and directed by Barry Jenkins and the story follows a newly engaged Harlem woman, Tish (Kiki Layne), who races against the clock to prove her lover’s, Alonzo ‘Fonny’ Hunt (Stephan James), innocence while carrying their first-born child.

'Remember love is what brought you here. And if you trusted love this far, don't panic now. Trust it all the way.' - Sharon Rivers (If Beale Street Could Talk) Click To Tweet

James Baldwin: [voice over] When I was growing up, I was trying to make a connection between the life I saw and the life I lived. There are days when you wonder what your role is in this country, and what your future is in it. This is one of them. The thing that tormented me the most was the very thing that connected me to all the people who are alive. I’ll tell you a story if I may.

[first lines]
Tish Rivers: You ready for this?
Alonzo ‘Fonny’ Hunt: I’ve never been more ready for anything in my whole life.
[he kisses her]

Tish Rivers: [voice over] I hope that nobody has ever had to look at anybody they love through glass.

[to Joseph and Ernestine]
Sharon Rivers: This is a sacrament. And, no, I ain’t lost my mind. We are drinking to new life. Tish is going to have Fonny’s baby.

Joseph Rivers: Tish, you sure you want this baby?
Tish Rivers: Yes. And Fonny wants it, too. It’s our baby, and it’s not his fault that he’s in jail. It’s not like he ran away. And we’ve always been best friends, ever since we were little, daddy, you know that. And we’d be married now if it wasn’t for that lady…
Sharon Rivers: Tish, he knows it. He knows it. Your daddy knows it. He’s just worried about you, that’s all.
Joseph Rivers: Hey, don’t you go thinking I think you’re some bad girl, or any other foolishness like that. I just asked you because you’re so young, that’s all. And…
[Tish lowers her head]
Ernestine Rivers: Unbow your head, sister.
[making a toast]
Sharon Rivers: To the newborn.

Adrienne Hunt: Mr. Rivers, what exactly is the purpose of this meeting? You didn’t call us all the way over here just to watch my father insult my mother?
Tish Rivers: Why not? It’s Saturday night. Can’t tell what folks won’t do if they get bored enough. Maybe we just invited you over to liven things up.
Adrienne Hunt: I can believe you’re that malicious, but I can’t believe you’re that stupid.

Mrs. Hunt: And who’s going to be responsible for this baby?
Tish Rivers: The father and the mother.
Frank Hunt: You can bet it won’t be the Holy damn Ghost.
Mrs. Hunt: I guess you call your lustful action love. I don’t. I always knew you’d be the destruction of my son. The Bible says, “Put to death, therefore, all that is earthly in you. Sexual immorality, impurity, passion, evil desire, covetousness.” That child was born of sin, and the Holy Ghost is going to cause it to shrivel in your womb. But my son, my son will be forgiven. My prayers…
[suddenly Frank strikes her hard in the face and she falls to the ground]
Adrienne Hunt: Mama.
Joseph Rivers: Frank!
Adrienne Hunt: Her heart!
Frank Hunt: I think you’ll find it’s still pumping, but I wouldn’t call it no heart!

Adrienne Hunt: So who is going to raise this baby?
Tish Rivers: I am, you dried-up, yellow c*nt! And you keep on talking, I’ll take mighty good care of you.
[Adrienne gets up to retaliate]
Ernestine Rivers: Adrienne, baby! Can I tell you something, sweetie? Ever since the first day I laid eyes on your very fine person, I got caught up in your Adam’s apple. Oh, I’ve been dreaming about it. And I can’t tell whether I want to tear it out with my fingers or my teeth. And if you touch my baby sister, I’m going to have to make up my mind real quick. So touch her.

Tish Rivers: I like lying here like this.
Alonzo ‘Fonny’ Hunt: I do, too.
Tish Rivers: That was my first time. Did you know?

Alonzo ‘Fonny’ Hunt: How long you been out, man?
Daniel Carty: Hmm. About three months. It was bad, man. Very bad. I mean, it’s bad now. Maybe I’d feel different if I had done something and got caught, but I ain’t do nothing. They were just playing with me because they knew they could. And, look, I’m lucky that I only got two years, because when you in there, they can do with you whatever they want. You hear me? Whatever they want. And they’re dogs, man. You know, I found out in the slammer what Malcolm and them cats was talking about. The white man has got to be the devil. Because he sure ain’t a man. Some of the things I’ve seen, I’d be dreaming about it until the day I die.

Sharon Rivers: I know I can’t help you very much right now. Lord knows what I wouldn’t give if I could. But I know about suffering, and I know that it ends. And when you’re lying in this bed, you not by yourself. You’ve got this child right here beneath your heart. And we’re all counting on you. Fonny counting on you, to bring this baby here safe and well. You’re the only one that can do it. You understand?
Tish Rivers: Yes, mama.
Sharon Rivers: Okay. I don’t want to sound foolish, but remember love is what brought you here. And if you trusted love this far, don’t panic now. Trust it all the way. I love you, baby girl.
Tish Rivers: I love you, too.

Levy: Look, man, with me, it’s, uh, it’s pretty simple. I dig people who love each other. Black, white, green, purple, it doesn’t really matter to me. Just spread the love, you know?
Alonzo ‘Fonny’ Hunt: Oh, so you’re a hippie now?
Levy: No.
Alonzo ‘Fonny’ Hunt: I ain’t take you for no hippie, man.
Levy: No, man, I’m, uh, I don’t know. I’m just my mother’s son. You know, sometimes that’s all that makes the difference between us and them.

Joseph Rivers: [to Frank] Your son is the father of my daughter’s child. Now, how you going to sit here and act like can’t nothing be done? We got a baby on the way here, man. You want me to beat the shit out of you? Now, I know some hustles, and you know some hustles, and these are our children, and we got to set them free. So, let’s drink on up, man, and let’s go on in. We got a whole lot of shit to deal with in a hurry.

[visiting Fonny in jail]
Tish Rivers: You alright?
Alonzo ‘Fonny’ Hunt: Me? I’m not the one who just got punched by a midget inside they’re belly.
[there’s a pause and then they both laugh]

[after Sharon travels to Puerto Rico and meets with Victoria]
Sharon Rivers: Daughter, I was a woman long before you was a woman, remember that. And I know you pay for the lies you tell. You sent a man to jail, one you ain’t never even seen before. Just twenty-two years-old, young, and he wants to marry my daughter.
Victoria Rogers: I did see him.
Sharon Rivers: You saw him in the police line-up. That was the only time you saw him.
Victoria Rogers: What makes you so sure?
Sharon Rivers: I’ve known him all his life.

[visiting Fonny in jail]
Tish Rivers: Look, there’s something I got to tell you. Mama came home from Puerto Rico. She found Victoria, but the girl went crazy. They don’t know where she is now, so the trial might be postponed.
[Fonny lowers his head and looks visibly upset]
Tish Rivers: Fonny? Fonny?
Alonzo ‘Fonny’ Hunt: I’m fine. Listen, I’m, I’ll be out soon. I’m coming home because I’m glad I came. Can you dig that?


What do you think of If Beale Street Could Talk quotes? Let us know what you think in the comments below as we’d love to know.