Incredibles 2 Best Quotes – ‘You have powers!’ 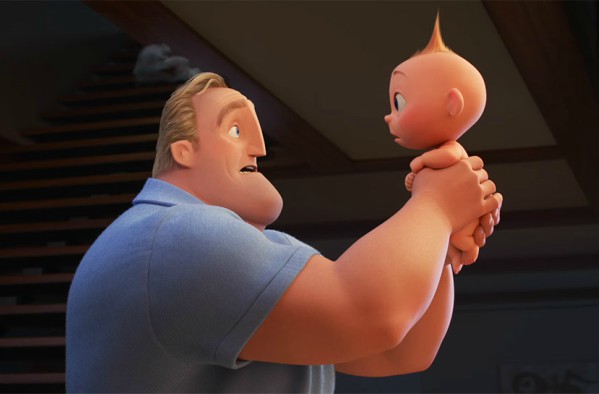 It’s a tough transition for everyone, made tougher by the fact that the family is still unaware of baby Jack-Jack’s emerging superpowers. When a new villain hatches a brilliant and dangerous plot, the family and Lucius Best/Frozone (Samuel L. Jackson) must find a way to work together again, which is easier said than done, even when they’re all incredible.

The Underminer: Behold, The Underminer!
[to Violet and Dash]
Helen Parr: You watch after Jack-Jack.
Violet Parr: But I thought we were going to go…
Bob Parr: You hear your mother! Trampolining!
[he trampolines off of Helen, who’s stretched herself out between two vehicles]
Bob Parr: We meet again.
[The Underminer knocks him out]

Bob Parr: You weren’t much help.
Rick Dicker: You want out of the hole? First you got to put down the shovel.

[to Bob and Helen]
Lucius Best: I was approached by this tycoon. He wants to talk about hero stuff.

Winston Deavor: It’s time to make some wrong things right. Help me bring supers back into the sunlight. We need to change people’s perceptions about superheroes, and Elastigirl is our best play.
Bob Parr: Better than me?
[Helen looks at him in anger and clears her throat loudly]

[as they enter their new house]
Dashiell ‘Dash’ Parr: Woh, I like mom’s new job!

Helen Parr: I know it’s crazy, right? To help my family, I got to leave it, to fix the law, I got it break it.
Bob Parr: You’ve got to, so our kids can have that choice.

Violet Parr: What exactly is mom’s new job?
Bob Parr: She’s an advocate for superheroes.
Violet Parr: But I thought superheroes were still illegal.
Bob Parr: Hey…
[realizes he doesn’t know how to answer the question since it’s true and quickly changes the subject]
Bob Parr: Hey, the bus is here!

[on the phone to Bob]
Helen Parr: So things haven’t spiraled out of control the moment I left?

[watching in shock after Violet has tried to destroy her superhero suit]
Dashiell ‘Dash’ Parr: Is she having adolescence?

[reading to Jack-Jack, looking exhausted]
Bob Parr: All over Doozeldorf, Doozes are dozing. Their eyelids are so heavy, they’re drooping…
[Bob falls asleep, Jack-Jack gives him a quick slap to the face to wake him]
Bob Parr: Closing!

[on the phone to Bob]
Helen Parr: I couldn’t have done this if you hadn’t taken over so well.

Screenslaver: The Screenslaver interrupts this program for an important announcement.

Screenslaver: Go ahead, send your supers to stop me. Grab your snacks, watch your screens and see what happens. You are no longer in control, I am.

[after Violet has called Lucius to help with Jack-Jack’s new powers]
Lucius Best: Looks normal to me. When did this start happening?
Bob Parr: Well, since Helen got the job.
Lucius Best: I assume she knows.
Bob Parr: Are you kidding? I can’t tell her about this. Not while she’s doing hero work.
[Helen appears on the TV]
Jack-Jack Parr: Mama.
Helen Parr: Girls, come on. Leave the saving of the world to the men?! I don’t think so!
Bob Parr: I’ve got to succeed, so she can succeed! So we can succeed!
Lucius Best: I get it, Bob. I get it. When was the last time you slept?
Bob Parr: Who keeps track of that? Besides, he’s a baby, I can handle it. I got this handled.
Lucius Best: So you’re good then? You got everything under control, right?
[Jack-Jack disappears into another dimension]
Lucius Best: What the… ?!
Bob Parr: Okay, Jack-Jack want a cookie? Yum-yum, cookie. Jack-Jack. Yum-yum, cookie. Cookie.
Lucius Best: You’re not…
Bob Parr: Cookie.
Lucius Best: Oh, my God!
[Jack-Jack reappears and Bob gives him the cookie]
Lucius Best: Woh, daddy! So, he can hear you…
Bob Parr: From the other dimension. Yeah.
Lucius Best: That is freaky. And that’s not good.
Bob Parr: Not like our other kids. No, it is not! Full power, totally random.
Lucius Best: So, now he’s, what, physically there?
Bob Parr: Yeah, well, you’d think so, right? Obviously, I can’t keep giving him cookies! But if I stop…
[Jack-Jack turns into devil baby]
Bob Parr: No! No biting dad. Don’t bite! Okay. I think I just need a little bit of me time. Then I’ll be good to go.
Lucius Best: Oh, you need more than me time, Bob. You need major life realignment on a number of levels. Starting with baby super-freak, here!

Bob Parr: I’m sorry. I’m used to knowing what the right thing to do is. But now, I’m not sure, anymore. I just want to be a good dad.
Violet Parr: You’re not good, you’re super.

Bob Parr: I can’t tell you how much I appreciate you watching Jack-Jack for me, E.
Edna Mode: Yes, I’m sure your gratitude is quite inexpressible. Don’t ask me to do it again, darling, my rates are far too high.
[Bob looks a bit taken aback]
Edna Mode: I am joking, Robert, I enjoyed the assignment. He is bright and I am stimulated, we deserve each other. You child is a polymorph. Like all babies, he has enormous potential. It’s not unknown for supers to have more than one power, when young, but, this little one has many.
[to Jack-Jack]
Edna Mode: Yes, you have many powers?

Edna Mode: I understand your lack of sleep is confusing you, Robert. Babies can be anything, and your child is no exception. Shows unlimited potential, Robert. That’s why I worked in a creative fever. Auntie E has stayed up all night, making sure you look fabulous in your uniform.
Bob Parr: What are, you’re putting him in…
Edna Mode: In the chamber, Robert. He is part of the demonstration and will be fine. Your challenge is to manage a baby who has multiple powers and no control over them, yes?
Bob Parr: Well, uh, that sums it up.
Edna Mode: I often work to music, and I noticed the baby responds to it as well. Specifically Mozart.
[referring to Jack-Jack’s new superhero suit]
Edna Mode: I blended kevlar with carbide for durability under duress and comfort also. Interwoven with these fabrics, are a mesh of tiny sensors that monitor the baby’s physical properties.
Bob Parr: Oh, Lord! What’s he, what is he doing?
Edna Mode: Well, it’s Mozart, Robert! Can you blame him? The important thing is that the suit and tracker anticipated the change and alerted you.
[as he sees Jack-Jack multiplies]
Bob Parr: Oh no! Cookies, I got to get cookies!
Edna Mode: You do not need cookies, as I learned quite painfully, last night. Any solution involving cookies will inevitably result in the demon baby.
[we see Jack-Jack turn into the demon baby]

[as they watch Jack-Jack testing his new superhero suit]
Bob Parr: Combustion imminent! What does that mean?
[suddenly Jack-Jack bursts into flames]
Bob Parr: Aah!
Edna Mode: It means fire, Robert. Though, the suit has countermeasures, I suggest you extinguish the baby’s flames, before he tests the sprinkler system. Flame retardant is blackberry-lavender, darling. Effective, edible and delicious.
Bob Parr: Oh, what do you know. That, is useful.
Edna Mode: Although I have doubtlessly exceeded your expectations for a single night’s work. the suit and device contain a few more features we need to discuss.

Bob Parr: Thanks again, E, for everything. How much do I owe you?
Edna Mode: Oh, pish-posh, darling. Your bill will be covered by my fee for being Mr. Incredible, Elastigirl and Frozone’s exclusive designer throughout the known universe and until the end of time. But babysitting this one, I do for free, darling.

[on the phone]
Bob Parr: Suit up, it might get weird.
Lucius Best: I’ll be there ASAP.
[Lucius hangs up and as he turns to suit up he hears his wife’s voice]
Lucius’s Wife: Where are you going ASAP? You better be back ASAP!

Bob Parr: Hey, you did this. Can you undo it?
Krushauer: You want me to un-crush? What, no one’s ever asked for that? No, to un-crush is silly! Why un-crush?
Bob Parr: To get into the engine room. Oh, forget, it, we don’t have enough time.
Krushauer: What if I said to un-punch someone? What you do?

What do you think of The Incredibles 2 quotes? Let us know what you think in the comments below as we’d love to know.