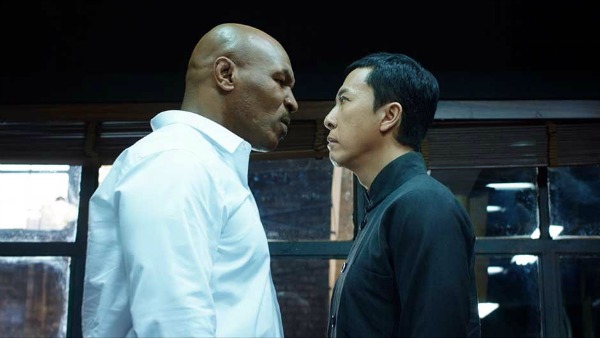 On New Year’s Eve, I contemplated watching Ip Man 3 in the cinema as I was slightly disappointed with the plot of Star Wars: The Force Awakens. However, I knew that I had to catch this latest and possible final instalment of the Ip Man trilogy. Being a fan of action and martial arts films, I am glad that I made the choice to watch Ip Man 3 in the cinemas to kick-start the action-packed New Year of 2016.

The film opens in Hong Kong where Ip Man has opened his school of martial arts which is in the form of Wing Chun. Early into the film, we see Ip Man who is portrayed by Donnie Yen speaking to the young Bruce Lee who is portrayed by Danny Chan. Though I like the martial art scene with Donnie Yen and Bruce Lee, I felt that the scenes with Lee in it were just fillers or cameos which could have been used to increase the hype and storyline of Ip Man’s history with Bruce Lee as his student. More homage could have been paid to Bruce Lee as he is one of the world’s best known martial artists.

I felt that the film did fare better in the overall storyline and character development area where the film not only explored Ip Man’s Wing Chun prowess but his character and personality towards the people around him too. Family and relationship were an integral part of the story telling which gave the film more heart and soul. Additional screen-time was given to Ip Man’s wife who is portrayed by Lynn Hung and his son as they was more dialogue between them which showed the emotional side of Ip Man in choosing his family over Wing Chun. It was a touching sight to see Ip Man tending and caring for his wife even when she fell gravely ill and his bond with his son in protecting his loved ones at all cost.

The fight scenes were epic and the one aspect that I like about the film is that there is never a dull moment and every moment added value and purpose to the storyline. It was beautifully choreographed and the soundtrack that went with the film kept the audience at the edge of their seats whenever a fight scene was taking place. The only qualm about the fight scenes throughout the film is that Ip Man does not get injured as much as he should be which can be seen in Ip Man 2 which actually made me feared for the character’s life. However, the three minutes fight scene with Mike Tyson who plays Frank and Ip Man shows that both of them are equally matched in their area of strengths. It is a pity that Frank does not pose a larger threat to Ip Man which would make for multiple fight scenes to occur.

Ip Man 3 wraps up most of Ip Man’s character as the legendary Wing Chun master who had trained the legendary Bruce Lee back in the day. Also, it shows that even though people remember him for his impressive Wing Chun martial arts, his character is one of great sacrifice and that he always treasures his loved ones and is willing to set aside his passion for them. The film does give Star Wars: The Force Awakens a run for its money and Donnie Yen is slated to star in the next Star Wars film too which would be something to look out for. I must say that it is a definite must watch film as any lover of the martial arts and follower of the Ip Man film franchise would appreciate this film in paying tribute to the greatest and pioneer in the field of martial arts, Ip Man.