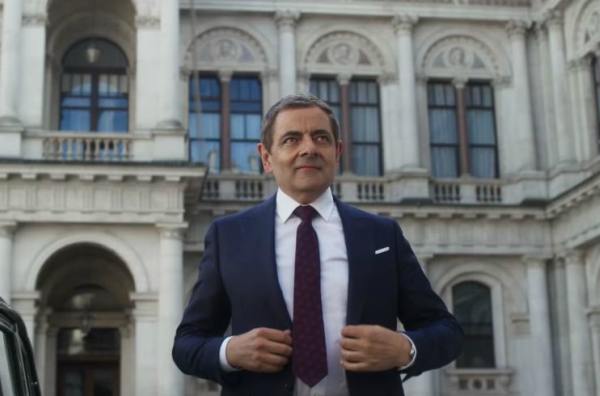 Spy action comedy sequel directed by David Kerr. In this third installment of the Johnny English series, disaster strikes when a criminal mastermind reveals the identities of all active undercover agents in Britain. The secret service can now rely on only one man, Johnny English (Rowan Atkinson).

Called out of retirement, English dives head first into action with the mission to find the mastermind hacker. As a man with few skills and analogue methods, English must overcome the challenges of modern technology to make this mission a success.

Prime Minister: Who’s doing this?
Pegasus: We’re not sure, ma’am.
Prime Minister: So one week before I host my first G12 Summit, Britain’s entire security apparatus has been taken down, and you know absolutely nothing?
Pegasus: That does pretty much sums up the situation, ma’am, yes.
Prime Minister: Well, you better get someone on it and find me some answers!
Pegasus: Yes, but that’s the problem. We don’t have any agents left. They’ve all been outed.
Prime Minister: So bring back an old one!

Bough: Sir! Wonderful to see you!
[he gives English a massive hug]
Johnny English: Yes, alright, Bough. We’re going on a mission, not a honeymoon.
Bough: Yes, of course, sir.
[as they pull apart, Bough’s jumper is caught on English’s belt buckle]
Bough: Ah. I think it’s the pin of your buckle, sir. It’s caught on my jumper.
Johnny English: Yes, I can see what’s wrong, Bough. If you go to your left and I’ll go to my right.
[they start moving in the same direction]
Johnny English: I’m sorry, no, if you go to your right and I’ll go to my left.
[they move in the same direction again]
Johnny English: No. If I go clockwise and you go anti-clockwise…
[they try moving away from each other]
Bough: Uh, no, I think that’s making it worse, sir.
Johnny English: Hmm. I’m surprised that didn’t work.

[referring to the yacht]
Bough: Looks about half a mile out, sir. Do we want to try and swim it, or…
Johnny English: No, Bough. This is a job for the shoebox inflatable.
Bough: No, don’t open it in the car, sir!
[English sets off the inflatable raft inside the car, both English and Bough are squashed up against the side windows]
Johnny English: Can you reach your door handle?
Bough: No, sir.
Johnny English: I’ll try my side.

Johnny English: Right, Bough, our aim is to get on board without anyone noticing. And how are we going to do it? Magnetic boots.
[holds up the boots]
Bough: Brilliant, sir.
Johnny English: A simple mechanism. Left switch activates left boot. Right switch activates right. Okay, let’s go.
[they start walking up the side of the yacht with the magnetic boots]
Johnny English: Remember, the absolutely vital element of this mission is surprise.
[as they’re walking on the outside of the yacht, inside in the kitchen metal object start flying and sticking to the to the wall]
Johnny English: Now, you have to get up pretty early in the morning to outwit British Intelligence.
[they manage to climb onboard the yacht]
Johnny English: Quick!
[as they scramble along on their hands and knees across the deck, suddenly a spotlight shines on them and the alarm goes off]

[as he’s about to jump off the side of the yacht, Ophelia points her gun at him]
Johnny English: If you’d wanted to kill me, you would have already done so.
[Ophelia lowers her gun]
Johnny English: Till we meet again.
[he gives a small salute, leans back thinking he’s going land in the sea, instead, he falls onto the lower deck]
Johnny English: Ooh! Ow! Ooh. Ooh. Ooh.
[Ophelia looks down at English]
Ophelia Bhuletova: Well, that was sooner than I expected.
Johnny English: Ooh. Ow, ow, ow, ow. Ow!
[we hear the water splash as he manages to throw himself off board]

[referring to Ophelia]
Bough: Who do you think she is, sir?
Johnny English: Well, if she’s not the owner of that yacht, then she knows who is. Either way, she’s the key to this case.

Bough: Is it true you were teaching, sir, before all this blew up?
Johnny English: If by “teaching” you mean scouting for potential intelligence operatives then, yes, I was.
Bough: Hm. I actually got married, sir. I don’t know if you heard.
Johnny English: No.
Bough: Yeah, Lydia. Lovely girl. You never think about getting hitched yourself, sir?
Johnny English: This is no life for a married man, Bough. The danger, the constant travel.
[the waitress brings their bill]
Waitress: Here you go, sir.
Bough: More Lydia’s life than mine, sir. She’s in the Navy, you see.
Johnny English: What, as a cook, or some kind of seagoing secretary, or…
Bough: Oh, no, sir. She’s the captain of a nuclear submarine.
Johnny English: Oh, right.

[encountering some cyclists on the road as they are chasing after Ophelia]
Johnny English: Arm the missile.
Bough: The what?
Johnny English: The missile, Bough, the one with the tear gas warhead.
Bough: But they’re just cyclists, sir. I mean, we’ll get past in a minute.
Johnny English: They’re French cyclists, Bough, and they’re obstructing Her Majesty’s Secret Service.

Ophelia Bhuletova: I’m not sure I’ve ever met a man quite like you, Basil.
Johnny English: Let me clear up the uncertainty for you. You haven’t.
[he takes a sip from his cocktail and the little umbrella in his glass gets stuck on his nose]

Johnny English: Virtual reality?
Bough: That’s right, sir. P’s built a computer model of the inside of Volta’s mansion.
P: When you put on this headset, it will look and feel as if you are inside the house. You’ll be able to open and close doors, walk up and down staircases, completely familiarize yourself with its layout.
Bough: This floor moves in any direction. Uh, so you can walk…
[Bough gets onto the floor, and P unlocks the system]
Bough: You can walk as far as you want in the virtual world without ever actually leaving this room. One thing though, sir. The experience can be very disorientating. It’s completely immersive and some people lose all track of their actual surroundings.
Johnny English: [chuckles] I think we can pretty much guarantee that’s not going to happen.

Prime Minister: Can I just ask, what is wrong with you? The country is in a state of complete chaos. The press is wetting itself, and the only person capable of saving us is the man you’re accusing of high treason.
Johnny English: I was in the room myself when he gave the order, Prime Minister! But there was a, you know, the…
Prime Minister: Do you know what I was in the room with, English? Your file, which I’ve read, in its entirety, and I have a few questions. Did you or did you not burn the Cote de Roc restaurant in Antibes to the ground?
Johnny English: Um…
Prime Minister: And did you or did you not fire a guided missile at a peloton of French cyclists?
Johnny English: Well…
Prime Minister: Before commandeering an open-top bus and tossing the tour guide off the top deck, and then assaulting an eight-two year-old grandmother in a sandwich shop before battering the employee of said sandwich shop with two organic sourdough baguettes?
Johnny English: Uh, I don’t remember the…

Prime Minister: Do you have any idea how hard it is to be me?Hm?
[English shakes his head]
Prime Minister: Do you have even the foggiest notion of how virtually impossible it is to get anything done in the face of events, and facts, and voters, and that tsunami of tosspots we call “the national press”? Finally I get the chance to do something good for my country, and what happens? The universe sends me you. Well, do you know what I say? I say, up the universe’s arse! And do you know what else I say? You’re fired, with immediate effect. Now get out! And make sure I never clap eyes on that imbecile ever again!

[to the press]
Prime Minister: I had hoped to present to you tonight a vision of what Britain might be. But, as it happens, the man who saved us all this evening, the man who, I might add, I personally assigned to this case, has presented us with a different kind of vision. A living embodiment, if you like, of those fundamental British qualities that have ensured that our beloved island nation endures. Courage under fire, endless ingenuity, and above all, a quiet unassailable dignity.
[just then English accidentally opens his belt buckle, which drops his pants, revealing his naked bottom half to the shock of everyone]


What do you think of Johnny English 3 quotes? Let us know what you think in the comments below as we’d love to know.