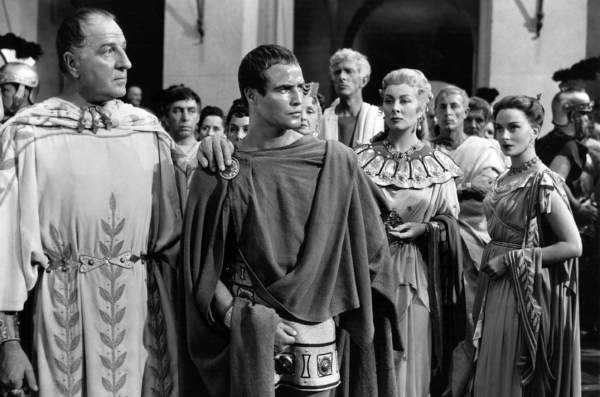 As in Shakespeare’s play, it is ancient Rome and Caesar (Louis Calhern) has just returned from battle. Many of his friends and admirers, though they love him, are becoming apprehensive of his ambitions. There is talk in the air of the people making Caesar King of Rome, to the chagrin of many around him who value a more pluralistic government. A conspiracy is made to kill Caesar in the senate by many of his friends and admirers, including Brutus (James Mason), Cassius (John Gielgud), Casca (Edmund O’Brian), and others. Meanwhile, they worry about the potential reaction of the people and the actions of Caesar’s extremely loyal supporter Marc Anthony (Marlon Brando) in response to their deeds.

I originally thought that the habit of blurting out Shakespeare’s lines at a ridiculous speed was a rookie mistake made by amateur community theatre actors and high school students. I was disillusioned to find that even the professionals do the same. While not as much a problem as in Kenneth Branagh’s Hamlet, there are many times in this film where the lines are unintelligible, and other moments where the power of the words is lost in the speed of the delivery. That was not the only issue with the performances.

Due to the lofty descriptions of Caesar by the other characters made portraying him in his full glory extremely difficult for any actor. Consequently, Calhern didn’t capture the gravitas that the character required. Cassius’ actor was stilted and unexpressive at times. Portia’s scene with Brutus lacked the tenderness and emotional connection it has in the play. Lucius’ actor was noticeably monotoned and emotionless. To be fair, the actor was only a kid and plays a minor side character, but his delivery was still distractingly poor. James Mason, Brutus’ actor, gave a better performance than most of his co-stars. He delivered the lines well, had good emotion, and played the internal conflict of the character well, but he was still less expressive and emotional than he could have been.

Brando is an entirely different league from any of the other cast. The moment he comes on screen, his expressiveness immediately stood out from the other actors’ comparatively stilted delivery. His performance of Mark Anthony was captivating in his manipulation of the masses in the “Friends Romans Countrymen speech” and his portents of war and bloodshed. His performance stood out to the point where it was jarring, and the other actors’ performances where of noticeably different quality from his.

The Oscar winning sets of this film looked pretty and grand if not a little fake-looking by today standards. The costumes where well done and the battle seems were big and exciting feeling for their time. Impressive amounts of extras were used for the scene in the pulpit, which is a spectacle not seen as much today. The music was standard suspenseful music. All of the production values were good, but not great.

Aside from one stand out performance, this adaptation is merely adequate. Most if the film is executed passably, but not to the play’s full potential.