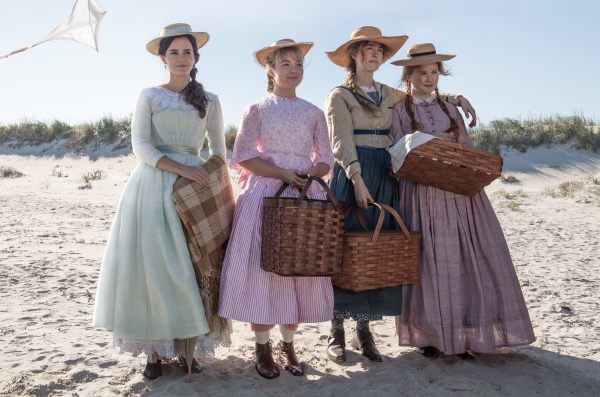 Period drama written and directed by Greta Gerwig. Set in 1860s New England, in the aftermath of the American Civil War, the story follows the lives of four sisters, Jo (Saoirse Ronan), Meg (Emma Watson), Amy (Florence Pugh), and Beth (Eliza Scanlen) as they come of age. Though all very different from each other, the March sisters stand by each other through difficult and changing times.

Copyright Notice: It’s easy to see when our quotes have been copied and pasted, as you’re also copying our mistakes and movie scene descriptions. If you decide to copy our movie quotes please be kind and either link back, or refer back to our site. Please check out our copyright policies here. Thanks!

Amy March: I want to be an artist in Rome and be the best painter in the world.
Beth March: That’s what you want too, isn’t it, Jo, to be a famous writer?
Jo March: Yes. But it sounds so crass when she says it.

Marmee March: My girls have a way of getting into mischief.
Theodore ‘Laurie’ Laurence: Well, so do I.

Theodore ‘Laurie’ Laurence: This is Meg, Amy, Beth, and Jo.

Jo March: I intend to make my own way in the world.
Aunt March: No one makes their way, least of all a woman. You’ll need to marry well.
Jo March: But you’re not married, Aunt March.
Aunt March: Well, that’s because I’m rich.

Aunt March: [to Amy] Jo is a lost cause. So you are your family’s hope now.

Amy March: I believe we have some power over who we love. It isn’t something that just happens to a person.
Theodore ‘Laurie’ Laurence: I think the poets might disagree.

[referring to her painting]
Amy March: I want it to be great, or nothing.

Jo March: I’m working on a novel. It is a story of my life my sisters.
Publisher: Make it short and spicy. And if the main character is a girl, make sure she’s married by the end.

[to Jo; referring to the main character in her book]
Publisher: So who does she marry?

What do you think of Little Women quotes? Let us know what you think in the comments below as we’d love to know.