Disney’s animated musical fantasy adventure directed by Ron Clements and John Muske. Moana (2016) centers on Moana Waialiki (Auli’i Cravalho), a sea voyaging enthusiast, and the only daughter of a chief in a long line of navigators who sets sail in search of a fabled island to save her people. During her journey, Moana meets the once-mighty demigod Maui (Dwayne Johnson), who guides her in her quest to become a master wayfinder. Together, they sail across the open ocean on an action-packed voyage, encountering enormous monsters and impossible odds, and along the way, Moana fulfills the ancient quest of her ancestors and discovers the one thing she’s always sought: her own identity.

'Sometimes our strengths lie beneath the surface. Far beneath in some cases.' - Moana (Moana) Click To Tweet

Gramma Tala: In the beginning there was only ocean until the Mother Island emerged. Te Fiti. Her heart held the greatest power ever known. It could create life itself. And Te Fiti shared it with the world. But in time, some began to seek Te Fiti’s heart. They believed if they could possess it, the great power of creation would be theirs. And one day, the most daring of them all voyaged across the vast ocean to take it. He was a demi-god of the wind and sea. He was a warrior. A trickster. A shapeshifter who could change form with the power of his magical fishhook. And his name was Maui.

Gramma Tala: But without her heart, Te Fiti began to crumble, giving birth to a terrible darkness.

Gramma Tala: Maui tried to escape but was confronted by another who sought the Heart. Te Ka! A demon of earth and fire. Maui was struck from the sky, never to be seen again. And his magical fishhook and the Heart of Te Fiti were lost to the sea. Where, even now, a thousand years later, Te Ka and the demons of the deep still hunt for the Heart. Hiding in a darkness that will continue to spread, chasing away our fish, draining the life from island after island until every one of us is devoured by the bloodthirsty jaws of inescapable death!

Gramma Tala: But one day, the Heart will be found by someone who will journey beyond our reef, find Maui, deliver him across the great ocean to restore Te Fiti’s Heart and save us all..

Chief Tui: You will do wondrous things, my little minnow. Oh, yes. But first, you must learn where you’re meant to be.

Chief Tui: [singing] There comes a day When you’re going to look around and realize happiness is where you are.

Moana: Sometimes our strengths lie beneath the surface. Far beneath in some cases.

Maui: Do you know who Maui is? Only the greatest demigod in all of the pacific islands. With his magical fishhook he slowed down the sun, pulled islands out of the sea, battled monsters, and I should know, because I’m Maui.
Maui: [referring to the continuous drum beat] Hey! Let me do this please.
Maui: [does the traditional dance, Moana who stares at him in confusion Nothing? Really? What’s a demigod got to do?

'Sometimes who we wish we were, what we wish we could do, it's just not meant to be.' - Sina (Moana) Click To Tweet

Moana: Maui, shapeshifter, demigod of the wind and the sea, let’s save the world.
Maui: I’m not going on a mission with some kid.
Moana: You’d be a hero. That’s what you’re all about, right?
Moana: [Maui imagines crowds chanting his name and hears the chant] Maui, Maui, Maui. You’re so amazing.

Maui: I’m not going on a mission with some little girl.
Moana: This is my canoe, and you will journey to…
Maui: [throws her into the sea, then see the sea drop Moana back onto the boat] I did not see that coming.
Moana: The ocean is a friend of mine.

Maui: We’ve got to go through a whole ocean of bad. Ever defeat a lava monster?
Moana: No. Have you?
[Maui looks away in anger confirming he hasn’t]

Maui: [the Kakamura blow darts into his butt cheek, he falls down flat on his face] Really? Blow dart in my butt cheek.

Moana: [looking down an opening in the rocks] We’re going to the realm of monsters.
Maui: Don’t worry, it’s  a lot further down than it looks.
Maui: [jumps in and screams with glee, Moana keeps looking down the opening] I am still falling!

Maui: Moana, I got your back! It’s Maui time!

Moana: The ocean chose me for a reason.

Gramma Tala: [to Moana] Whatever just happened, blame it on the pig.

Moana: Okay, first, I am not a princess. I’m the daughter of the chief.
Maui: Same difference.
Moana: No.
Maui: If you wear a dress, and have an animal sidekick, you’re a princess.

Maui: [to Moana] If you start singing, I’m going to throw up.

Tamatoa: [to Moana] Are you just trying to get me to talk about myself? Because if you are I will gladly do so. In song form!

Tamatoa: [post-credits lines] Can we be real? If my name was Sebastian and I had a cool Jamaican accent, you’d totally help me. You would. You know you would. 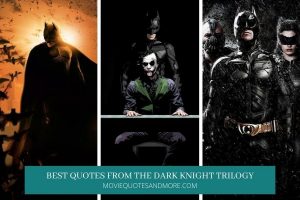