Home / Best Quotes / Molly’s Game Best Quotes – ‘I was in a room with movie stars, directors and business titans.’ 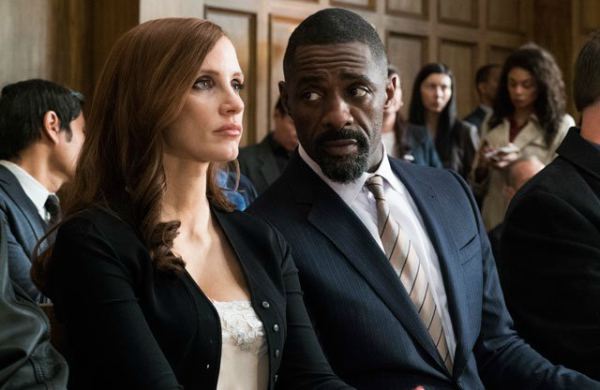 Drama written and directed by Aaron Sorkin in his directorial debut, based on the true story of Molly Bloom (Jessica Chastain), an Olympic-class skier who ran the world’s most exclusive high-stakes poker game for a decade before being arrested in the middle of the night by 17 FBI agents wielding automatic weapons.

Her players included Hollywood royalty, sports stars, business titans and finally, unbeknownst to her, the Russian mob. Her only ally was her criminal defense lawyer Charlie Jaffey (Idris Elba), who learned that there was much more to Molly than the tabloids led us to believe.

Judge: [to Molly] Do you understand that you are charged with operating an illegal gambling business?

Molly Bloom: I’m Molly Bloom. Do you know about me?
Charlie Jaffey: I read your indictment after I got your call last night, and I bought your book.

Charlie Jaffey: Have you seen the other names in your indictment? Come on, Molly, just how deep into the Russian mob were you?

Molly Bloom: Are you taking me on as a client?
Charlie Jaffey: I don’t think I can convince my partners to take a flyer on a poker assassin.
Molly Bloom: If you think a princess can do what I did, you’re incorrect. I’m getting it, you don’t think much of me, but what if every single one of your ill-informed unsophisticated opinions about me were wrong?
Charlie Jaffey: I’d be amazed.

Charlie Jaffey: You ran games in LA for roughly eight years?
Molly Bloom: Yeah.
Charlie Jaffey: And then you ran games in New York for roughly two.
Molly Bloom: I haven’t run a game in over two years, not to spoil the ending, because that’s when the government raided my game and took all of money assuming all of it was made illegally, which it wasn’t.

Molly Bloom: [voice over] This is a true story, but except for my own, I’ve changed all the names.

Molly Bloom: [voice over] I was in a room with movie stars, directors and business titans. They were going all in, all the time.

Molly Bloom: Do you know how many witches were burnt in Salem?
Charlie’s Daughter: How many?
Molly Bloom: None. They didn’t burn witches, it’s a myth. They hanged them.

Molly Bloom: [voice over] The humiliation had given way to blinding anger at my powerlessness. I wasn’t going to wait before I put a plan in place.

Molly Bloom: I’ll be hosting a game in this suite every Tuesday night. The first buy-in, two hundred and fifty thousand.

Eli: [to Molly] You spent eight years in Hollywood and two years in New York running the world’s most exclusive and decadent mancave.

Eli: You spent eight years running the world’s most exclusive glamorous and decadent man cave. Guarantee the publishers certain elements and I can you a million and a half.
Molly Bloom: What kind of elements?
Eli: You have to use real names.

Molly’s Friend: [to Molly] You’re exposure is crazy. You’re going to get blown up.

Molly’s Friend: [to Molly] You’re risk is nuts. You’re going to get blown up.

Agent Delarosa: [to Molly] You got two point eight million on the streak right now, that money should be in your hands.


Larry Bloom: [to Molly] Why does a young woman who at twenty-two has a gold plated resume, why does she run poker games?

Larry Bloom: You’ve managed to build a multi-million dollar business using not much more than your wits.
Molly Bloom: I’m about to be charged in a federal court.
Larry Bloom: Well nobody’s perfect.

Molly Bloom: The law that I’m accused of breaking defines gambling as betting on games of chance.
Charlie Jaffey: Yes.
Molly Bloom: Poker’s isn’t a game of chance. Poker’s a game of skill.

Charlie Jaffey: There’s a new offer on the table. Complete immunity if you hand over the hard drives.
Molly Bloom: You’ve seen what’s on those hard drives. Families, lives, careers will be ruined.

Charlie Jaffey: Why are you in this alone? Where are the people you’re protecting by not telling the whole story?
Molly Bloom: I’ll tell them everything they want to know about me. About me. That’s it.

Molly Bloom: You know what makes you feel okay about losing? Winning.


What do you think of Molly’s Game quotes? Let us know what you think in the comments below as we’d love to know.