Motherless Brooklyn New Movie Quotes – ‘You remember what I said?’ 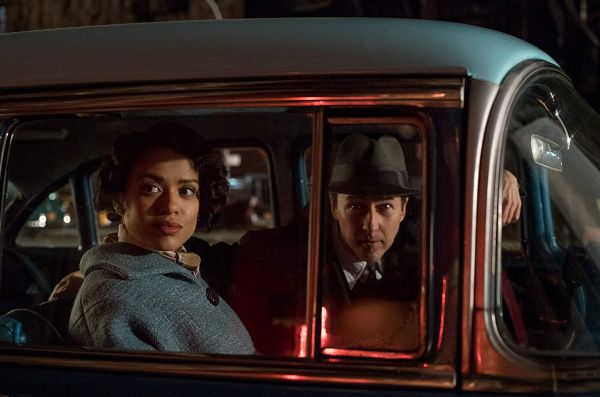 Crime drama written and directed by Edward Norton. The story is set against the backdrop of 1950s New York, and follows Lionel Essrog (Edward Norton), a private detective with Tourette’s Syndrome, as he tries to solve the murder of his mentor and only friend, Frank Minna (Bruce Willis). Armed only with a few clues and the powerful engine of his obsessive mind, Lionel unravels closely-guarded secrets that hold the fate of the whole city in the balance.

Lionel Essrog: [voice over] Okay, listen. I got something wrong with me. That’s the first thing to know. I twitch and shout a lot. It makes me look like a damn freak show. But inside my head is an even bigger mess. I can’t stop twisting things around, words and sounds especially. I have to keep playing with them until they come out right.

[he immediately blows a match he’s just lit to light a woman’s cigarette at the bar]
Lionel Essrog: Sorry.
[he lights another match and blows it out again]
Lady at the Bar: Jeez. Forget I asked.
[the woman turns and leaves]
Lionel Essrog: [voice over] Like I said, a damn mess.

Lionel Essrog: [voice over] Then I started working for Frank. Frank Minna, Private Eye. He’s the one who taught me how to use my head, turn it into a strength. He gave me a place in this crappy world, until I screwed up.

[as Frank is lying in the hospital bleeding from a gunshot wound]
Frank Minna: She’s in trouble now.
Lionel Essrog: Who?

Tony Vermonte: Does anybody know what Frank was into on this?
Lionel Essrog: There’s something going down, and it’s big, and they were not happy about what he found.
Tony Vermonte: If we find who did this, we square accounts.

[referring to Frank’s murder]
Lionel Essrog: If I figure it out, I’m going to make them regret it, I promise you that.

[referring to Laura]
Lionel Essrog: That’s her. That’s the girl that Frank was following! I think she found something.

Laura Rose: What happens to poor people in this city wasn’t news yesterday, and it won’t be tomorrow.
Lionel Essrog: Where does everybody go?
Laura Rose: Mostly just disappear.

Paul Randolph: [to Lionel] This town is run by Moses Randolph. When someone isn’t seen for what they truly are, that’s a very dangerous thing.

Moses Randolph: [to Lionel] Do you have the first inkling how power works? Power is knowing that you can do whatever you want, and not one person can stop you.

[to Lionel; referring to the homeless]
Moses Randolph: Those people are invisible. They don’t exist.

[to Lionel; referring to Moses]
Paul Randolph: If you threaten his work, he will destroy you.

Lionel Essrog: You all alone?
Laura Rose: You got no idea.

Lionel Essrog: [to Laura] You’re webbed up in this somehow, and these people aren’t going to stop.

Man: [to Lionel] You got a head just like mine, always turning things around. Some people call it a gift, but it’s a brain affliction just the same.

Frank Minna: [to Lionel] You remember what I said?

Laura Rose: [to Lionel] What don’t I know?

What do you think of Motherless Brooklyn quotes? Let us know what you think in the comments below as we’d love to know.