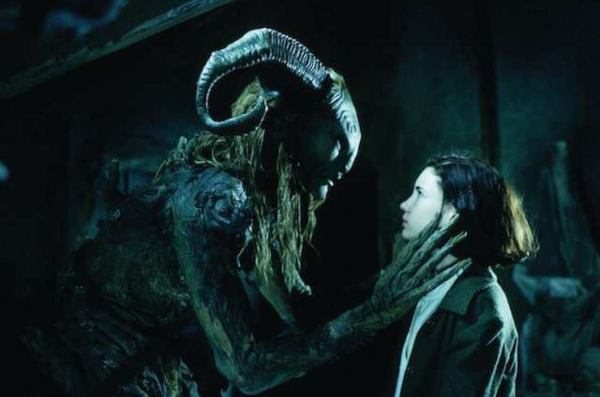 Guillermo del Toro’s Pan’s Labyrinth is a captivating journey through a dark fantasy world commingling with the brutality of Francoist Spain. The film centers around a young girl, Ofelia, whose mother has married a fascist captain, Vidal, and is pregnant with what the captain feverishly believes to be a son. Ofelia prefers the company of her books of fairytales and the natural wonders of the Spanish foothills to her cruel, arrogant stepfather. While adventuring, she comes across an ancient labyrinth and meets a sinister yet tempting faun who assures her that she is royalty bound to the mortal world, and that to assume her rightful place on the throne she must complete three tasks before the moon is full.

These tasks put her at odds with her stepfather’s orderly, regimented worldview and present hidden dangers in some of the film’s most nightmarishly fantastic imagery. The sadism of the real-world violence in the film is no less ghastly however, with the subplot of the captain’s assistant (and traitor) Mercedes and her fight to help her brother’s rebel troops quickly growing bloody, del Toro shows restraint in his portrayal of particularly gruesome moments, but the prevalence of stark imagery leads to a rather intense experience. The use of color grading to accentuate the color of blood, and the presence of blood as a key ritualistic component throughout the film underscores major themes of sacrifice, martyrdom, violence and power.

The use of sound in the film particularly lends itself to accentuating tension. Small noises become central focal points in the mix, and the limited score is used as a motif to tie together and flavor certain scenes. Visual metaphors and repetition of scenes are used forcefully to connect the fantastic and real worlds and imbue the characters with a variety of secondary characteristics. The use of foreshadowing and the parallels between the items Ofelia retrieves and those used by Mercedes create a deeper meaning to the film’s commentary on the real and fantastic.

The set design is beautiful, from the interior of Vidal’s room mirroring that of his omnipresent watch to the muted rustic village and the moss-covered, weathered ruins of the titular labyrinth. The makeup and costume design are superb, with unique motions to all the creatures that made them feel alive in an uncanny, supernatural or fey way. The use of strong, vivid color grading doesn’t feel heavy handed and progresses throughout the film to perfectly accentuate the tone of scenes.

As strong a condemnation of conformity as it is a deconstruction of fabulist storytelling, the powerful delivery of lines, intense color choices, and deft special effects and transitions suggested a highbrow film that still had heart and marveled at the world around it. Certain subtleties, such as the use of “Pan” in the title or the fact that Vidal uses the masculine form of a greeting to refer to his unborn son are lost in translation, and may slightly mar the experience of the film, but the end result is chiefly one that I feel crosses cultural boundaries with its strong emotional and artistic core.