Peter Rabbit Best Quotes – ‘This is only the beginning.’ 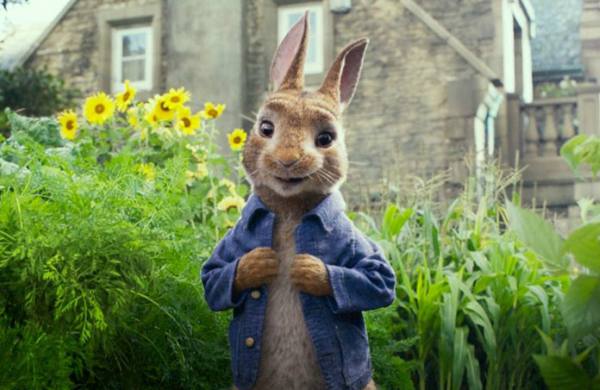 Live action animated comedy directed and co-written by Will Gluck, in which the story centers on the mischievous Peter Rabbit (voiced by James Corden). Peter’s feud with Mr. McGregor (Domhnall Gleeson) escalates to greater heights than ever before as they rival for the affections of the warm-hearted animal lover, Bea (Rose Byrne), who lives next door.

Narrator: Once upon a time in a beautiful wood there lived a rabbit named Peter with a blue jacket and no pants.

Benjamin: Peter, are you sure you know what you’re doing?
Peter Rabbit: Never stopped me before.

[to the animals]
Peter Rabbit: Come on, we’ve got the garden. Help yourself to anything.
[referring to the fox]
Peter Rabbit: Wait. Didn’t you try to eat me? Show me your teeth? Do like a… Go like…
[he growls like a fox and the fox growls back]
Peter Rabbit: It was you! I knew it. How are you? So good to see you.

[as they are all partying in McGregor’s house]
Hedgehog: Oh, yeah. Now it’s a party.
Peter Rabbit: I can’t think of one thing that could possibly stop our fun.

Rabbit: McGregor is coming! Everyone hide!
[all the animals hide; we see McGregor enter his house and see it in total disarray]

Peter Rabbit: This is only the beginning.

[referring to McGregor]
Peter Rabbit: It looks like there’s a new owner. This guy, who does he think he is? This is our land!

[to Peter and the other animals]
Bea: Checking on our new neighbor. I’ll explain it to him, we all share our land around here.

[as they watch McGregor and Bea on date]
Peter Rabbit: Okay, so he’s tricked her. There’s only one way out of this. He’s got to go.

Mr. McGregor: Did you know they set traps in my bed?
Bea: These are rabbits! They wouldn’t hurt anyone.

Mr. McGregor: In London we find vermin and we exterminate them.

Mr. McGregor: I have a vermin problem.
Store Clerk: An electric fence will keep them out.

Peter Rabbit: This is our ancestors land, it’s time to get our garden back. We’re going to need everyone.

Bea: [McGregor] to Rabbits are perfect creatures. You’ll grow to love them.

Mr. McGregor: [to Peter] Things are not going to end well for you.

Peter Rabbit: No guts, no glory.

[referring to McGregor]
Peter Rabbit: It’s time to bring the fight to him.

[referring to Peter]
Bea: Would you like to have a hold? Aren’t you boys getting along perfectly?

[we see McGregor and Peter fighting]
Bea: Thomas.
[Bea finds them looking friendly as McGregor reads to Peter]
Mr. McGregor: And that’s what separates us from the French.

What do you think of Peter Rabbit quotes? Let us know in the comments below as we’d love to know.