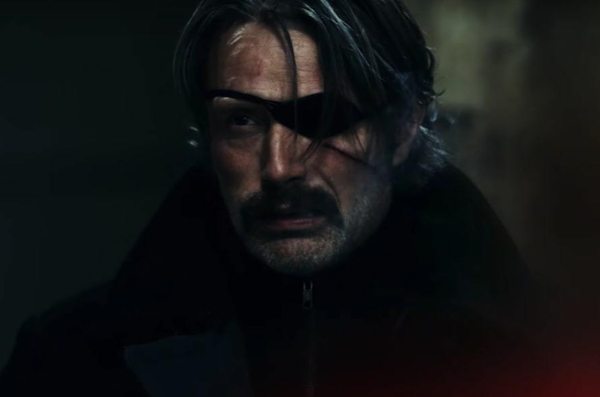 Action crime drama directed by Jonas Åkerlund. The story centers on a master assassin, Duncan Vizla (Mads Mikkelsen), aka The Black Kaiser, who is settling into retirement when his former employer marks him as a liability to the firm. Against his will, he finds himself back in the game going head to head with an army of younger, faster, ruthless killers who will stop at nothing to have him silenced.

Vivian: You should just forget about him and move on.
Blut: Who can forget about the Black Kaiser? So very special.
Vivian: This is a bad idea.

Regina: We have some questions regarding the purchase of Damocles. Accounts show this year, your liabilities are at twenty-nine million, yet next year your liabilities are predicted to be paid off.
Blut: Correct.
Regina: In fact, we were surprised to see that they have become revenue.
Blut: Correct.
Regina: This seems to be done in order to inflate the value of your company.
Blut: We control the pensions of our former employees. They pay into our fund, we match their contributions, and manage the investments.
Regina: Please do explain, Mr Blut.
Blut: It’s our company policy that all our agents must retire at the age of fifty. We have a plethora of agents who have now reached this milestone. Their combined fund adds up to twenty-nine million dollars.
Regina: How do you consider this income?
Blut: If our agents were to die in the field of duty, or in an unspecified accident, the clause in their contract states that Damocles would be the beneficiary.
Regina: And you are assuming they will die?
Blut: I don’t assume they will die, I guarantee it.
Regina: If you can uphold that guarantee, we will move forward with this deal.

[on the phone]
Duncan Vizla: Vivian, somebody set me up over here, and you better pray you have nothing to do with it.

Vivian: You tried to kill the Black Kaiser with some low-rent Mexican clowns?
[sarcastically]
Vivian: Yeah, that plan worked well. I told you we should leave him the fuck alone!
Blut: You worry too much.

Vivian: You’re going to have to pay him everything now.
Blut: I don’t have to do shit until his birthday.
Vivian: Right. Pay him the second half of his fee, so we don’t have to look over our fucking shoulder for the rest of our lives.
Blut: Okay, do it.
Vivian: Smart move.

Store Owner: Did you happen to see anything peculiar out by your place over the past couple days? Perhaps some sort of supernatural event of someone dumping a truckload of logs?
Duncan Vizla: No.
[referring to Camille]
Store Owner: Oh. This young lady rents up where you are. You can probably see her cabin from your place across the lake. Maybe not, I don’t know. Seems her woodpile got filled up as if by magic!

Camille: How many countries have you been to?
Duncan Vizla: Ninety-nine.
Camille: Most people don’t even know ninety-nine countries.
Duncan Vizla: Andorra. Albania. Austria. Australia. Antigua. Angola. Algeria. Afghanistan. Argentina. Azerbaijan. That was ten. And I’m only at the As, so, yeah.

[to the school kids]
Duncan Vizla: Right, last one.
School Kid: Do they speak American in England?
[we see flashback of Vizla choking a man to death in London]
Duncan Vizla: They don’t speak a lot.

[referring to Vizla, as he’s trying to kill him]
Facundo: Where the hell is he?
Sindy: Under the bed!

Duncan Vizla: Try not to be scared.
Hilde: Scared of what?
Duncan Vizla: You make mistakes when you’re afraid.
Hilde: No mistakes. Not today.

Vivian: What you should do is pay Duncan his fucking pension and enjoy the rest of your life.
Blut: No! This is personal.
Vivian: Stealing his pension, trying to kill him, twice, and kidnapping his cute little neighbor, that is personal.
Blut: I want him.

[Vizla groans in pain as Blut tortures him]
Blut: Sorry, did that hurt? The fun continues tomorrow, Mr. Vizla.

Jazmin: [to Vizla] I always knew you’d come back. I was just hoping it’d be for me, not the guns.

Vivian: I thought you stopped smoking.
Duncan Vizla: Yeah. I figured it wouldn’t kill me.

[after Camille has revealed that she’s the child Vizla had spared on his botched assassination years ago]
Camille: Why didn’t you just shoot me?
Duncan Vizla: It was not supposed to happen. It was a mistake. I was given the wrong information…
Camille: Don’t talk. Just don’t talk. Every day, I pray that I’d died that night. Do you understand?
[Vizla nods]
Camille: No, do you understand?
Duncan Vizla: I’m sorry.

[referring to the money Vizla he had been putting in a trust fund for her]
Camille: Yeah, I didn’t learn about it until I turned twenty-one. Someone paid for my school. Someone was asking for salvation. I thought, “Follow the money,” as they say. It wasn’t as hard as I thought. It just took me a while to go there. Too afraid, I guess. I thought that if I saw you, I might get my family back when I closed my eyes. But that didn’t happen. I didn’t move on. I can’t! Do you understand?
Duncan Vizla: Yeah.

[pointing her gun at Vizla]
Camille: I don’t want to see you anymore. I want you to go away, and I want them to come back. Understand?
[Vizla nods]
Duncan Vizla: Close your mind, and pull the trigger.
[Camille sobs]
Duncan Vizla: It’s okay.
[Camille continues to sob as she puts her finger on the trigger and we hear a gunshot]

[last lines; after not going through with killing Vizla’s]
Camille: Do you know who wanted my father dead?
Duncan Vizla: No.
Camille: Well, can we find out?
Duncan Vizla: We can try.


What do you think of Polar quotes? Let us know what you think in the comments below as we’d love to know.