Horror action reboot written and directed by Johannes Roberts adapted from the stories of the first and second games by Capcom. In Resident Evil: Welcome to Raccoon City (2021), once the booming home of pharmaceutical giant Umbrella Corporation, Raccoon City is now a dying Midwestern town. The company’s exodus left the city a wasteland with great evil brewing below the surface. When that evil is unleashed, the townspeople are forever changed and a small group of survivors must work together to uncover the truth behind Umbrella and make it through the night.

Truck Driver: [as Claire wakes from her nightmare] That must have been quite some dream. I almost s**t my goddamn pants. If I knew you were going to be screaming in your sleep, I would’ve left you at the side of the road.

Truck Driver: [to Claire] What are you doing out hitchhiking on a night like this anyway? Oh, yeah. Going to see your brother, you said. Right. Used to live here, you said. Raccoon City. Better you than me. You know, one might have nightmares heading back into that s**thole town. Nothing left except the raccoons since Umbrella started to leave.

Kevin Dooley: Oh, you must be the rookie. How you doing, rookie? So, I heard that you shot your partner in the a** during training. Is that true? And that your daddy, some big shot on the force, that he had to bail you out. Now, is that why they transferred you to this s**thole town? Leon S. Kennedy. What’s the “S” stand for? “Stupid”? Oh. Come on, we’re just playing with you, kiddo.

Louise: [referring to Jill and Wesker] I wouldn’t go there. She’s only got eyes for the big fella, and I don’t fancy your chances against him. You really shoot your own partner?
Leon Kennedy: Yeah. It’s a long story.

Claire Redfield: [looking at a photo of Jill with Chris and Wesker] Still pining after Jill, I see. Never going to happen, bro.

Chris Redfield: I owe this town, I owe Birkin and Umbrella everything. They raised me, put me through school, the academy. They were there for me. Where were you? I haven’t even heard from you in five years. Nice seeing you.
Claire Redfield: Chris, wait. I’m sorry. I’m back now.

Claire Redfield: Look, I think there’s something seriously wrong with this place.
Chris Redfield: What do you mean?

Ben Bertolucci: [as Chris and Claire watch the video] See, Umbrella just thought that they could pack up shop, and let this town rot away while they go off and start afresh somewhere else all shiny and new. And they almost f***ing did it. But a couple days ago, they had a little incident. And I’m not just talking about waste poisoning the water. No, I’m talking about a real bad leak. Like Chernobyl, if you know what I mean. And they’ve been trying to contain that s**t, but the genie is out of the bottle now, and I don’t think it’s going back in.

Ben Bertolucci: [on video] I’m afraid, Claire. I’m afraid of what they’re going to do to this town, and the people in it.
Claire Redfield: I’ve not been able to make contact with him since.
Chris Redfield: Great. He’s crazy and probably dangerous.

Chris Redfield: [to Claire] Look, your conspiracy theories weren’t true when we were kids. They’re not true now. Alright? Why are you really here? Did you lose your job? Do you need cash? You show up here, you break into my house. What kind of person can pick a lock like that? It’s kind of impressive, but also, what the f***?

Chris Redfield: I got to get to the station. Here. It’s not much. Just take it, okay? Lock-pick the door behind you when you leave.
Claire Redfield: Chris. Chris!
Chris Redfield: Just get out of here, okay? And don’t touch the bike!

'What would the worst way to die be? To be swallowed whole by a snake, or eaten alive by a great white shark?' - Jill Valentine (Resident Evil: Welcome to Raccoon City) Click To Tweet

Jill Valentine: What would the worst way to die be?
Albert Wesker: What?
Jill Valentine: To be swallowed whole by a snake, or eaten alive by a great white shark?
Chris Redfield: You’re a freak, Valentine. I plan on dying peacefully, in bed, snuggled in Wesker’s big burly arms.
Vickers: Me too brother.

Chief Irons: [as Wesker is checking his pager] A new girlfriend? Huh? Maybe you could take her out to eat at Planet Hollywood. They have a new one in Gatlin. Oh, they got a great salad. Little wine. Or maybe just take her back to your apartment, rent a movie at Blockbuster, get cozy on the couch, or put on some Journey. Steve Perry’s voice, what it does to a woman’s heart, huh? Am I right? How’s that sound?
Albert Wesker: Sounds like I might be getting laid.
Chief Irons: But it ain’t going to happen tonight, because I want you dressed in five, all of you, and ready to fly, because I want to know where the hell Bravo team is, and what the f*** all those alarms are about! You got me? Come on, get moving. Go.

Annette Birkin: Why can’t you tell me why we’re in such a hurry to leave?
William Birkin: Leaving, that’s what they want. So they can destroy my life’s work.

Chief Irons: [as he shoots a zombie on fire] You might want to get a fire extinguisher. And lock the gates. There may be others.
Leon Kennedy: Other what?

Leon Kennedy: Should we call someone?
Chief Irons: Who you going to call? You’re the police.
Leon Kennedy: An ambulance?
Chief Irons: Look, I’m no medical expert, but I think that guy might just be beyond saving, hmm? Besides, I think you’ll find that all the phone lines in the city are dead.

Leon Kennedy: Hey, sir, I know I’m new here, and I don’t really know what’s going on. But so, where are you going? Who’s in charge now?
Chief Irons: You are.
Leon Kennedy: No, no, no. No. I’m a rookie, right?
Chief Irons: Yeah, well, congratulations, rookie, on the promotion. I’m sure your father would be incredibly proud that his pathetic specimen of a son is rising so quickly through the ranks.

Leon Kennedy: [referring to the people turning into zombies] Does someone want to tell me what the f*** is going on here? I mean, what’s happening to them?
Chief Irons: Clearly, some bad s**t!

Leon Kennedy: [referring to Ben’s jail inmate] Is he okay?
Ben Bertolucci: Him? Oh, yeah. No. He’s f***ing fine. Yeah. Yeah, who doesn’t cough up a little blood on the floor when they’re feeling sick? Just a little cold. Of course he’s not f***ing okay, man. Look at him.

Leon Kennedy: Why are you locked up?
Ben Bertolucci: Why? Because I found out the truth.
Leon Kennedy: The truth? What truth?
Ben Bertolucci: Hey. Listen to me, you f***ing boy band wannabe. You think Umbrella spend all their time making aspirins and little vitamin tablets? No f***ing way.

Leon Kennedy: [as Ben takes his gun and points it at him] You don’t have to do this.
Ben Bertolucci: Sure, I don’t. And you and all your police buddies, you’re not sick like the rest of the town just because you got a good immune system, right? F***, you probably had a little injection, a little vitamin pill you didn’t even realize. Keeps you safe at least for a while. But the others, ordinary people, expendable ones, yeah, good f***ing luck, right?

Ben Bertolucci: [to Leon] Yeah, you ever heard of the T-Virus and the G-Virus? Of course you f***ing haven’t. Well, it’s a virus that genetically modifies the DNA of a living cell, and it’s turning these people into f***ing weapons, man.

Claire Redfield: [to Leon, after Ben is killed by the zombie in his cell] Get your s**t together, or you’re not going to make it through the night.

Albert Wesker: Holy s**t, she was telling the truth.
Jill Valentine: Truth about what? Wesker, what’s going on?
Albert Wesker: They contacted me several months ago. It was once Umbrella started moving their operations out of Raccoon. I don’t know who they are. I don’t know, and I don’t care.

Albert Wesker: They’re just some people with a vested interest in getting hold of whatever dirty secrets Umbrella are keeping down there and exposing them.
Jill Valentine: What are you talking about?
Albert Wesker: Come on, Jill. Don’t look at me like that. It’s just money. Alright? And they have plenty of it. It was just a way of getting out of this this small town, dead-end life.
Jill Valentine: So you were just going to leave us?

Leon Kennedy: [to Claire, referring to Lisa] You got some weird friends.

Annette Birkin: [as they’re in Birkin’s secret lab] William, what have you been doing down here?
William Birkin: God’s work.

Albert Wesker: [referring to the virus] Listen, I’ve just come for that.
William Birkin: This is my life’s work. I’m not giving it to anybody.
Albert Wesker: [points his gun at Birkin] I’m not really offering you a choice here, pal.

William Birkin: Who do you work for?
Albert Wesker: It doesn’t matter.
William Birkin: No, I don’t suppose it does.
[suddenly he shoots Wesker, and Wesker shoots Birkin]

Albert Wesker: [after he kills Annette, to the wounded Birkin] You didn’t have to make it like this. What the hell is wrong with you?! This is so f***ed.
[shoots Birkin again]

Albert Wesker: [after Jill shoots him] Jesus, Valentine, you and that f***ing gun!

William Birkin: [after waking from injecting himself with the virus] Chris, come out and play. Did you really believe you could be part of my family? Ooh, such a sweet little soldier. Such a loyal little drone. Where are you, Chris? How could you be so dumb when your sister’s so smart?

William Birkin: [to Chris] You know, I almost feel sad having to kill you. Almost. You know, I should have taken you and your sister down to the lab. You would have made excellent specimens.

Claire Redfield: [as she shoots Birkin] Get the f*** away from my brother!

Chris Redfield: Rookie?
Leon Kennedy: Yeah. Trust me, I’m as surprised as you are, buddy.

Jill Valentine: Holy s**t. What the f*** you guys do to this train?
[Raccoon City then explodes and Chris, Claire, Leon, Jill, and Sherry walk out of the train tunnel]

Ada Wong: [mid-credits lines, after Wesker awakens in a body bag] You’re awake at last.
Albert Wesker: Where am I?
Ada Wong: That doesn’t matter.
Albert Wesker: Wait, I don’t understand. I thought I was dead.
Ada Wong: You were.
Albert Wesker: My eyes. What happened to my eyes? I can’t see.
Ada Wong: It’s a side effect. One of the things we had to do to bring you back. There will be others. 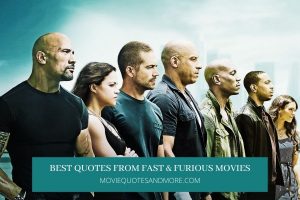