By Trenton Turner (US) 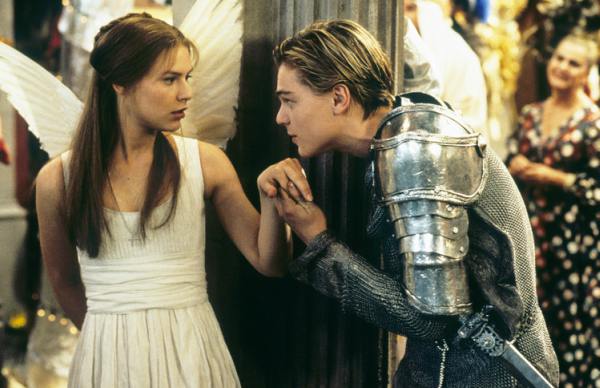 Recently I had the chance to watch the 1996 adapted version of Romeo + Juliet which was directed by Baz Luhrmann. Going into the movie, I thought it was going to do poor with the amount of criticism the film had beforehand. Well they were wrong for sure. The acting from Leonardo DiCaprio and Claire Danes nailed their performances as Romeo and Juliet. Don’t get me started with John Leguizamo who played Tybalt, but we’ll dive deeper into that later. In this article we will discuss the acting, set design, lighting, costumes, sound (soundtrack), makeup, technical execution and cinematography.

If you thought Leonardo was a heartthrob in Titanic, just you wait because not only do his looks backup his performance but the way he portrays Romeo just kills it. There are moments where you think exaggeration plays a huge role in the performance but it’s just the execution Leonardo has for the role of Romeo. Claire Danes plays a wild but young cute version of Juliet that makes you think, “And she is what age again?” Claire backs up her role of Juliet in many ways such as her face expressions towards Romeo. Tybalt who is played by John Leguizamo plays a fancy, aggressive and an action-packed version of Tybalt. Why can’t we just get a John Leguizamo and Bruce Willis spinoff? Tybalt vs John McClane, anyone?

The film takes place in a 90s version of Los Angeles/Miami which makes it an explosive film. Half of the film you are at the beach and Juliet’s overwhelming house. Lighting plays a vital role at the beach as when Romeo is getting into the heat of things with Tybalt. The sun hits the beach so perfect for them to at least have some signs of sun burn. I guess they were already tanned enough. Anyway, in the film there is this huge party scene that of course is followed with huge light scenery. It’s almost like they had a disco running in each corner of the house. They nailed it with bright scenery and good sun placement.

Costume and Makeup design for the film is incredibly beautiful. Romeo half of the time is wearing an unbutton shirt and jeans. Juliet is seen wearing a dress, pajamas and at one point no clothes. Tybalt on the other hand is wearing a more gangster style type of clothing. At the party Tybalt is wearing a sexy devil outfit that is not noticeable at all. You thought I was joking? The outfit is literally bright red mixed with bright glitter as if an elementary student made it. The makeup used for Juliet is average but basic as usually for any teenage girl that want attention. But overall it was decent for the costume and makeup design.

The music score for the film is amazing that flows from scene to scene which makes it fast paced. All the songs that were used my favorite were #1 Crush, Angel and Kissing You. Marius De Vries, Craig Armstrong and Nelle Hooper did a good job for the score of the film. It helped a lot in the scene transition as well as the mood for the film. Especially the scenes where Romeo and Juliet were together in.

The one thing the director did a good job at is cinematography and the technical execution for the film. Leonardo DiCaprio and Claire Danes were the right choice for Romeo and Juliet because of the chemistry seen on screen and they were the right age to be play the role at the time anyway. Huge congratulations to the screenwriters Baz Luhrmann and Craig Pearce for making this possible and the best adaptation of William Shakespeare’s Romeo and Juliet to date. This version indeed does go at a fast paced but for many already know that the ending doesn’t go as planned. But that’s ok because you get to see Claire Danes tear up and Leonardo without a shirt. “Romeo + Juliet 1996 is far by the best adaptation yet, filled with love and action, that of course does signify that not at love stories end off on a good note.”