Period mystery thriller directed by Tom George. Set in 1950s London, See How They Run (2022) follows a desperate Hollywood film producer set out to turn a popular West End play into a film. However, plans for a movie version of a smash-hit play come to an abrupt halt after a pivotal member of the crew is murdered. When world-weary Inspector Stoppard (Sam Rockwell), and eager rookie Constable Stalker (Saoirse Ronan), take on the case, the two find themselves thrown into a puzzling whodunit within the glamorously sordid theater underground, investigating the mysterious homicide at their own peril.

'It's always the insignificant detail that catches the killer in the end.' - Richard Attenborough (See How They Run) Click To Tweet

Leo Kopernick: Agatha Christie’s The Mousetrap. In my opinion, a second-rate murder mystery. Not that I’ve seen it, you understand. But it’s a whodunit. You’ve seen one, you’ve seen them all.

Leo Kopernick: You know the drill. An interminable prologue in which all the key players are introduced. You get a sense of the world they inhabit, and then the most unlikable character gets bumped off. Cue the entrance of a world-weary detective, who comes in and pokes his nose around. Talks to witnesses. Takes a couple of wrong turns. And then gathers all the suspects in the drawing room, and points the finger at the least likely chump because of the way the guy, I don’t know, ties his shoelaces. But what do I know? The Limeys, they just lap it up. The play’s a smash hit. Not to mention a cash cow.

Leo Kopernick: This is where I come in. Leo Kopernick’s the name. Big shot Hollywood director. Hired to make the film adaptation marginally less boring than the play. Easier said than done when the writer’s a giant pompous a**. Mervyn Cocker-Norris.

John Woolf: Mervyn. Shouldn’t you be home? I thought we had a deadline?
Mervyn Cocker-Norris: I thought so too. But then our esteemed director tore up the screenplay and told me to start all over again. He’s of the opinion that a modern audience will walk out in protest if they’re not served at least one violent death in the opening frames. Suffice to say, we are no longer on speaking terms.
Leo Kopernick: [from across the room] Merv, London’s most sensitive writer.

Richard Attenborough: It’s only fair to warn you that I learned to box in the RAF.
Leo Kopernick: Yeah? Well, I learned to fly a plane in Gleason’s Gym.

Leo Kopernick: [as he’s about to be killed] I guess I should have seen this coming. It’s always the most unlikable character who gets bumped off. It’s a whodunit. You’ve seen one, you’ve seen them all.

Constable Stalker: I do like a good murder.
Inspector Stoppard: Yes, thank you, Constable.

Constable Stalker: [to Stoppard] Yeah, that’s the ski that he took in the face, sir. And I’m afraid it was downhill from there. Oh. Sorry, sir. That one just came out on its own.

Constable Stalker: [to Stoppard] Perhaps they were all in on it together, sir.

'It's a whodunit. You've seen one, you've seen them all.' - Leo Kopernick (See How They Run) Click To Tweet

Mervyn Cocker-Norris: We are no longer merely suspects. We are also potential victims.

Commissioner Harrold Scott: Not to put too fine a point on it, Inspector, but your latest blunder is front page news. Fleet Street is all over this, like hot jam on a Devonshire scone. You are slap-bang in the crosshairs. Now, we need to do everything we can to make sure the bullet doesn’t miss you and hit me.

Leo Kopernick: [referring to the script] It’s horses**t!
Mervyn Cocker-Norris: No, it isn’t! Not all of it!

'No flashbacks. They are crass, lazy, and they interrupt the flow of the story. In my opinion, they are the last refuge of a moribund imagination. Whatever next? A caption that says, “Three weeks later?”' - Mervyn Cocker-Norris Click To Tweet

Constable Stalker: That’s that then, sir. It’s as good as a confession.
Inspector Stoppard: Let’s not jump to conclusions, Constable.

Leo Kopernick: [flashback, three weeks later] I pitched a new ending, Cockamamie-Novice over here locks himself in the bathroom.
John Woolf: Is this instead of the car chase?
Mervyn Cocker-Norris: As well as. I think he thinks “denouement” is French for “shootout”.

'People don't rip out other people's tongues because of creative differences.' - Inspector Stoppard (See How They Run) Click To Tweet

Constable Stalker: I’d say this is the type of thing that made you want to become a police officer, was it? Me? I just sort of fell into it really. They needed people after the war, and I needed the money, so. No, it’s true. The hours can be unsociable, but I can’t type, or stand the sight of blood. So, that ruled out secretary for me.

'This beanpole assaulted me, and I woke up in a carpet.' - Edana Romney (See How They Run) Click To Tweet

Constable Stalker: Have you seen the play, sir?
Commissioner Harrold Scott: Oh. Yes. I’m afraid I took the wife for her birthday. Of course, it didn’t fool me for a moment. I knew who did it right away. She was baffled though. Even after the chap explained everything. It was a trying night for all concerned. I’ll stick to flowers in future.
Constable Stalker: Yes, always a safe bet, sir.

Constable Stalker: You’re pulling my leg, sir. You’ve never heard of Dickie? Richard Attenborough. Pinky Brown. Brighton Rock. You must have. “You wanted a recording of my voice. Well, here it is. What you want me to say is, ‘I love you.'”
Inspector Stoppard: Keep in mind that we’re here to conduct an interview as part of a murder investigation, not an article of Sight and Sound magazine. Yes?
Constable Stalker: Yes, sir.

Sheila Sim: It was me, Inspector. You need look no further.
Constable Stalker: I arrest you for the murder of Leo Kopernick.
Inspector Stoppard: No, no, no. Not yet.

Richard Attenborough: Woolf promised you the role. He’s a man of his word. He went to Eton.
Sheila Sim: Oh, wake up, Dickie. He’s a man of whatever word will get his film made.

Richard Attenborough: I’m sure it’s always the insignificant detail that catches the killer in the end. Isn’t that so, Inspector?

Petula Spencer: You’ll have to excuse Mother. She’s not been herself since Father died, in the first Great War. It’s been a long thirty years.
Constable Stalker: It’s nice that you gave her a job.
Petula Spencer: Well, how else is she going to pay the rent? I let her have the spare room at a discount as it is.

Inspector Stoppard: People don’t rip out other people’s tongues because of creative differences. They do it out of revenge, or rage because they’ve lost a loved one. They can’t forgive, or forget, so they just stew and fester alone in the dark, until finally it all comes out in a sudden, frenzied act of violence.

Constable Stalker: What about you? Do you have any family, sir?
Inspector Stoppard: I came close, once. Yeah, I had an unfaithful wife. She was eight months pregnant when she told me I wasn’t the father. I’d made a cot and everything.

Constable Stalker: Stop in the name of the law!

Constable Stalker: Police. Stand back.
Mr. Lyon: [as Stalker breaks down the door] He keeps a key under the mat.

John Woolf: Darling, what are you doing here?
Edana Romney: I followed you. I suppose I was going to make a scene. Hello, Ann. Then this beanpole assaulted me, and I woke up in a carpet.

Max Mallowan: [to Dennis] What kind of a bumbling, half-witted psychopath are you?

John Woolf: A shoot-out and a big explosion. Perhaps it’s for the best that Mervyn wasn’t alive to see it.
Petula Spencer: Quite.

Inspector Stoppard: [breaking the fourth wall] Well, now that you’ve seen our film, you are an accomplice to murder. And so, we ask you to remember that it is very much in your interest not to tell a soul outside of this…
Constable Stalker: [as they’re watching the Mousetrap] Shh. Sir. Sorry. But I’ve missed the ending once. I don’t want to miss it again.
Inspector Stoppard: No, of course not. I’m sorry. Sorry.
[turns to the camera and shushes to us softly] 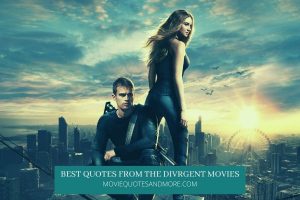