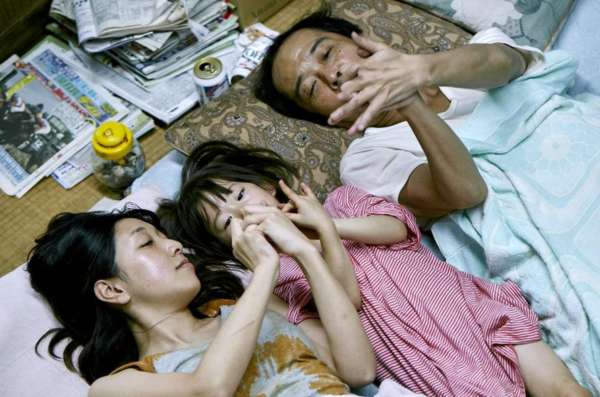 Winner of the Palme D’or at this year’s Cannes Film Festival, the latest feature from master film-maker Hirokazu Kore’eda (Still Walking, I Wish, After the Storm) proves to be one of his best, delicately balancing a dour viewpoint of modern society and the cold, tangled bureaucracy that looms over it, with something warmer, as we watch a group of struggling outcasts attempt to define what family truly means. Inspired by true events, the story follows the Shibata family, made up of father Osamu (Lily Franky), mother Nobuyo (Sakura Ando), older daughter Aki (Mayu Matsuoka), younger son Shota (Jyo Kairi), and grandmother Hatsue (Kirin Kiki, who sadly passed away in September, aged 75). Living in Hatsue’s cramped dwelling, the group mostly scrape by on her pension, though Nobuyo’s meagre part-time salary and Osamu’s occasional employment as a labourer does offer a tiny contribution.

What the Shibatas have had to master is the art of the steal, shoplifting what they need to survive, whether it be clothing or food, with young Shota even managing to become a skilled thief. While on their way home one cold evening, Osamu and Shota come across four year-old Yuri (Miyu Sasaki), who is sitting alone on a nearby balcony. Exposed to the elements, the two decide to take the youngster home with them, much to the annoyance of Nobuyo, who initially sees her as an added financial burden, and a potential problem if someone decides to come looking for her. When marks are discovered on her body, indicating parental abuse, any indecision as to whether she stays or not quickly disappears. Yuri is unsure how to handle their kindness and affection at first, but soon takes to the close knit unit, while her presence seems to send a newfound sense of bonding throughout the Shibatas, even though it begins to become unclear how many of them are actually related to one another. When Yuri’s disappearance finally makes the news, everyone’s loyalty will be tested in various ways, and individual secrets will be uncovered.

Kore’eda has managed to build an extraordinary body of work since making his feature film debut in 1995 with the quietly absorbing Maborosi, though his previous career as a documentarian is equally impressive. With films such as the gorgeous After Life (1998), the heart-wrenching Nobody Knows (2004), and the superbly life-affirming Our Little Sister (2015) aptly shows, Kore’eda magnificently observes the small details of people and the way they interact, not only with each other, but with the environment that surrounds them. His ability to get completely natural performances from his young actors is astounding, but hardly surprising to those who have seen his outstanding 1991 documentary Lessons from a Calf. While he does offer moments of humour and tenderness, Kore’eda also explores societal and governmental failings, where people on the fringes are shunned, separated, and even forgotten.

The acting is of the highest calibre, with each performer making the most of the material given to them. Franky, who wrote the best-selling autobiographical novel Tokyo Tower: Mom And Me, and Sometimes Dad, and was adapted multiple times (most notably as a feature film in 2007, starring Joe Odagiri and Kirin Kiki), has become an excellent character actor over the last decade, loosening up in a way that has made him a striking screen presence. Offering first-rate turns in The Devil’s Path (2013), Like Father, Like Son (2013), Pieta in the Toilet (2015), and A Beautiful Star (2017), Franky is splendid here, and seems to excel every time he teams up with Kore’eda.

Ando, who gained attention in Sion Sono’s epic Love Exposure (2004), has become one of Japan’s most gifted actors, normally playing tougher roles in films such as The Samurai That Night (2012), 100 Yen Love (2014) and 0.5mm (2014), but gets to play a more good-natured, sympathetic character this time around, and she is nothing short of brilliant. Between this and the recent Destiny: The Tale of Kamakura, one hopes this supremely talented actor is given the chance to smile a little more often. Jyo is perfect as the slightly pensive Shota, Sasaki steals every scene she’s in as Yuri, and the late Kiki (another Kore’eda regular, and starred in Naomi Kawase’s sublime An) is typically marvellous as Hatsue. Shoplifters is easily one of the best films for 2018, giving audiences the chance to connect with a gallery of genuine human beings, crafted by a director who skilfully brings these flawed souls to life in a thoughtful, believable, and totally empathetic manner, ensuring their story stays with us long after the end credits have rolled.